I remember, Invincible when it came out. The team did a Super Patriot book before it. I was ecstatic about it because I digged the art of the Super Patriot book. But at the time Invisible's first issue came out I was not into super hero books anymore. I picked Kirkman's zombie book, rather than his bright yellow blue teen super hero. Besides I'm sure that at one point in your comic geek life you have encounter the dreaded "Money shortage" and some books had to be sacrificed for the sake of your daily living. That was the case with me and Invisible--sure I read some reviews and features and the book sounded like a must have. Yet I never bothered to pick it up even in collected editions. 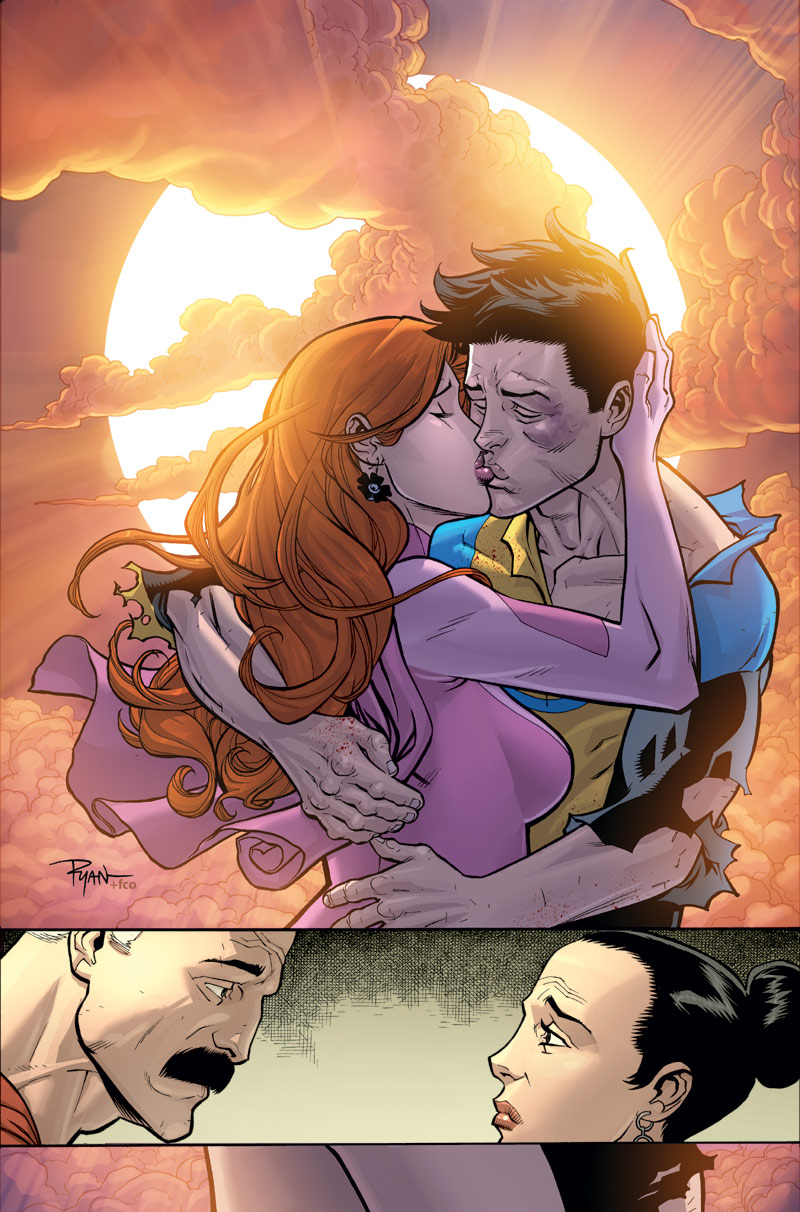 When I was assign for this issue, I thought maybe I should read the back issues before reviewing issue # 78-- its common sense right? But I remember when I was a kid I was not given that choice. If I wanted to pick a book, I had to picked whatever number was available. If it was issue 232 I picked issue 232 and if I like it, my run would start from there and if I was lucky I could go on a back issue hunt. So I read issue # 78 in hope that from that this point maybe I will add this book to my monthly collection.

From the first page I could see that the art has inproved greatly. Is still very colorful yet the art looks fresh. Cory walker was the reason that I wanted to buy this book but Mr. Ryan Ottley, is just plain perfect for this book; the way he handles how the super heroes move in this world is almost animated out of the page. Even though this story has no action, the way he hadles the story telling makes it feel like it has the characters' reaction to one another is an exmple of good acting drawn on the page.

Now, this is how the story goes. Apparently Invincible, made a decision that as long as the Viltrumite live among us, they would leave us alone at least that's what a Viltrumite that looks like Freddy Mercury said in the first page of the issue. Now the heroes return home after a victory but they are left asking what they really won? This story has five key elements or major plot points that are really the sumary of this issue: 1) Allen, is in possession of a virus that can kill all vultramites 2) Invincible's dad wants to get back with his wife but she doesn't want to, yet we see she is not a hundred percent sure. 3) Eve, Invincible's girlfriend doesn't know how to tell him about her big secret. Also we saw a glimpse into the pentagon's clone army of Invincibles and Zack gets a alien girlfriend (Lin). Overall the human relations of this book is excellent, makes you really care about everybody. The many plot lines on the book reminds me of the X-Men when they were cool. The dialog is simple and not over the top. My only complaint is that there is no info on what happened before, if you are reading this book for the first time, you might want to check the web for what previously happened in the book.

Although the book was not friendly for new readers; I felt it was easy to familiarize with the characters and the current plot lines were interesting enough for me to go pick up the next installment. I don't care for the designs of the characters but the characterizations is worth more than that. at times it reminded me of Geoff Johns run on The Flash. Now if you excuse me I'm going to pick up vol #1 and 2 of Invincible over the Image Comixology app.

For more on Invincible check out the review for issue # 74 and You Missed That Issue: Invincible #12
Rating
7.7