It might have taken longer to be released than fans would have liked, but the fantastic tower defense game, Iron Brigade, by Double Fine has finally arrived for the PC. The genius blend of witty writing, fun shooting, and tactical tower defense would make any skeptic change their mind about this genre. If you then consider the loot grind that Iron Brigade inspires, and the online co-op, then Double Fine has created a title that I hope turns into a franchise!

Iron Brigade is partly a tower defense, with some third-person shooter thrown into it. Iron Brigade challenges the player to defeat wave after wave of enemy, much like the Horde Mode in Gears of War -- sometimes you’ll be defending a single position, while on other occassions you will defend multiple positions. However, your objective is always the same: deploy turrets and use your mech’s guns to destroy everything you see. A great part about the game was the option to collect an enemy’s ‘scrap’ once it had fallen. This allowed for the ability to deploy additional turrets or emplacements.


A huge portion of the fun when playing Iron Brigade is figuring out the right mech to use for the level in question. Picking a chassis changes the amount of guns and emplacements you can bring, such as the Makeshift Shotgun Turret or the Advanced MG Turret. There are multiple chassis to support different styles of play. For example, if you prefer to play the game like a shooter then a chassis that allows a host of guns may be best, which will supplement combat weaknesses with one of two emplacements. Additionally, if you prefer to sit back and watch, then an engineer chassis with barely any weapons slots but with a load of emplacements may best suit the order to create a network of turrets to attack foes with instead. So, once you've figured on a play style you will then have to decide what armaments suit the enemies that lay ahead.  Customizations make for high levels of replayability because you can play stages very aggressively at one time or more strategically at another time. For instance, sometimes you might like to bring an assault mech fitted with six shotguns, whereas on other occasions you can feel pretty godly by creating a mech who can fight long range, short range, and everything in between.

I love customization of anything in games, so naturally Loot Boxes were the best thing about playing any stage, as there are few things better than the thrill of getting randomized loot that allows you to min/max your stats and damage. It’s addictive, and I found myself replaying levels in order to get a nice new gun or chassis. 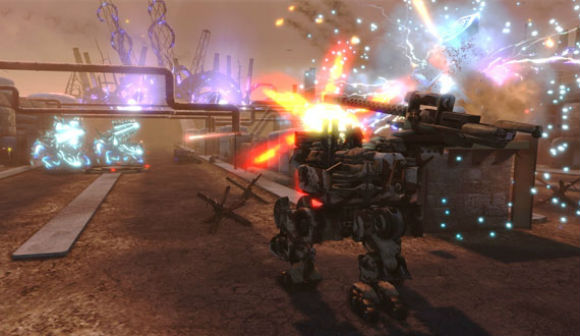 Upgrades through loot boxes are the best option to make a mechs powerful enough to take-on the bosses in Iron Brigade, though Boss encounter are very few in the game. The main goal is to stay alive and to defend one or more points. This dynamic never really gets old because the entertainment comes from utilizing the mech against a range of different enemy-types. One minute you'll find yourself firing an artillery round into a group of enemies at long range, and the next moment you'll be swarmed by tiny enemies that force the use of machine guns while falling back. just when you think you’re ready for anything and feeling like you’re unbeatable, you’re then forced to adapt to a new enemy-type. It's also up to you to go out there to collect the scraps once enemies are downed so you can adapt to the versatile range of enemies if you didn't bring all of the correct emplacements. The challenge in Iron Brigade become a dance between shooting, enemy prioritizations and looting them.

The gameplay of Iron Brigadeis extremely well-done, but what makes this game more than just a tower defense is the well-developed atmosphere. The campaign story isn’t too important to the levels themselves, but the writing is incredibly witty. In between levels, you visit a hub world on top of an aircraft carrier. From here, you can inspect your trench and customize it, choose the level, and invite friends to join you in the hub before you taking to the battlefield. The battlefield's settings are great, they perfectly capture the feeling of the alternative mid 20th century because Iron Brigade takes place in an alternate reality where 1940-style soldiers pilot giant anthropomorphic machines called Trenches in order to fight a madman and his army of constructs. 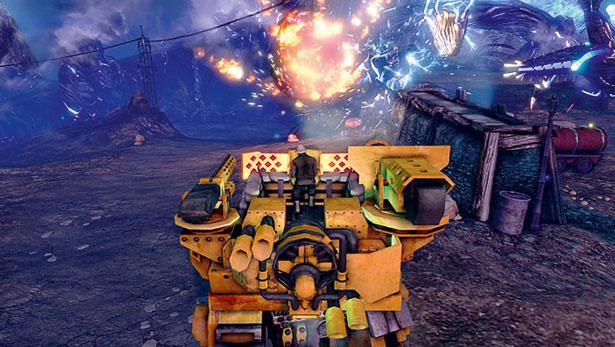 Inviting others to play in your hub is worth it to stop the madman and his constructs, as multiplayer makes replaying the levels even better. It’s a little too easy to play through stages with four players (despite the increase in enemies and the tougher mini-bosses), but with two or three additional players you can start to really experiment with the game play. For example one player can sort of Tank the match, leaving the other players to use weaker engineers or weapons that they wouldn’t normally equip.

Unfortunately, I found that the campaign mode was a little too short in both single and multiplayer.The only other little problem I have with this game is minor, Which is the inability to destroy your own turrets. It really hurts that when you’ve taken up a prime piece of land (turrets must be placed a few feet apart) with the wrong Turret just because you weren’t paying full attention and then it can't be moved personally. Despite the minor flaws it has, Iron Brigade is a fantastic game.

Iron Brigade does basically everything right. As well as having all the original content of the game, you also receive The Rise of the Martian Bear DLC as part of the PC package. This eventually means you will get hours of repeatable levels, including even more loot and levels to enjoy. If you like strategy or tower defense games then I suggest you wait no longer!