Irredeemable #26, is out this week and it continues the arc where the Plutonian is trapped in the insane asylum, built inside the heart of a star. He is still being guided by the mysterious Aroran. Back on Earth the Survivor, is still acting surprisingly suspicious. Kaidan, is trapped with the brainless body of the Survivor's twin brother, Scylla and Qubit and Modeus are on a quest to find the Plutonian. The world might be safe from the Plutonian, but this is really the calm before the storm.

This story arc mirrors the now classic Planet Hulk. The Plutonian is on an alien planet recruiting different alien beings for his plan to get out of there and back to Earth. It also mirrors Dante's Inferno as the Plutonian is descending to the heart of the planet every time finding different things in his path. For example he encounters a god like creature named Xotan. The Plutonian beats Xotan with out difficulty he also takes the liberty to skined one of Xotan's followers and makes himself a new costume. He recruits a new alien that has his back covered with mouths, they scream like tormented souls who are damned to a eternity in hell. He also recruits a green alien woman with claws, she can't hurt herself  because every time she cuts herself another person feels the cut. More importantly the Plutonian can feel her pain. This chatacters can symbolized a type of personal hell for the Plutonian as one can represent the brute force, the damnation and the desire to punished himself for the sins he committed. The aurorean could represent the ghost of the past or a type of angel of death showing the Plutonian every detail of his past life. Or simply he is recruiting some major powerhouses so that when he returns to Earth, he can kick some major ass. 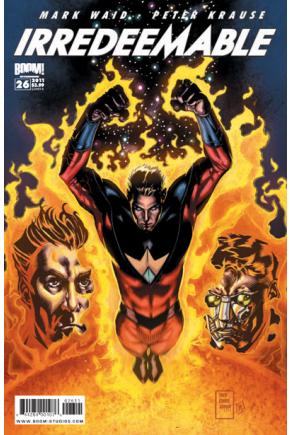 Kaidan, is trap somewhere on Earth with Scylla, she remembers how she fell in love with him and how Cary (Survivor) was shy and jelous of Scylla. This shows a nice character moment with Kaidan and is preparing the road for whatever Waid has planed for the Survivor. The issue ends with Modeus and Qubit reaching the alien planet, asking for the Plutonian's whereabouts.

Mark Waid has a knack for keeping this book interesting. This time he delivers a exploration of the Plutonian's past and interesting alien characters, borrowing from Planet Hulk, Star Trek, Superman, JLA and many others, but putting a fresh spin on everything. This is a big arc, well-balanced although some of the previous issue had a couple of unnecessary scenes (like the slave labor planet). However, this issue is picking up steam. Whatever Waid is planning is gonna be big, the Plutonian is one interesting character and this character study arc shows the different aspects of him. This chapter is just a small part of a bigger picture, to enjoy it to the fullest you should read the entire arc again.

The art team delivers an exceptional tour de force, with great character design, great facial expressions and wonderful portraits of moments. The team of Barreto and Krause work in a perfect union that is expertly complemented by the sweet colors of Andrew Dalhouse.  A perfect team to match Waid's script.

Even though every issue of Irredeemable is accessible to new readers, you can't help but feel that this story arc was made with trades in mind rather than single issues. Also it would be cool if the comic offers a kind of character library since the book continues to grow in characters and places with every issue that gets published. Other than that, the book is a joy to read and one of the best books out there.

Overall Score - 8.8/10
*Great! Worth any comic fan's time and money. It deserves to be in  your monthly list*