Sunny has an amazing habit of constantly getting better and batter. The first season was great and then in the second they brought on Danny Devito, embellished the character to make them little more than caricatures, and put the gang in the most ridiculous situations which only made the subsequent season's and episodes better. This week’s season premier Mac Fights Gay Marriage is a bit of a letdown. After an amazing patch of episodes in season 5…well minus the Who Pooped the Bed, this episode seems both phoned in and, with a few exceptions, just not very funny.

The episode picks up with Mac trying to use Dennis’ gym pass and the guy behind the counter not buying it. Mac uses the backwards logic that has become a staple of the show to try and convince the guy to let him in, it’s funny but nothing we haven’t heard from Mac before. While trying to trick the guy, Carmen the former transsexual Mac dated for a time, reappears and not only tells Mac that she has had the operation but that she is married. This starts Mac on his anti gay marriage crusade which isn’t so much driven by his beliefs as it stems from anger that Carmen has moved on. Mac has always been the one to get weirdly religious at times and it fits in with his character, especially when the gang questions his sexuality for sleeping with Carmen before the surgery. 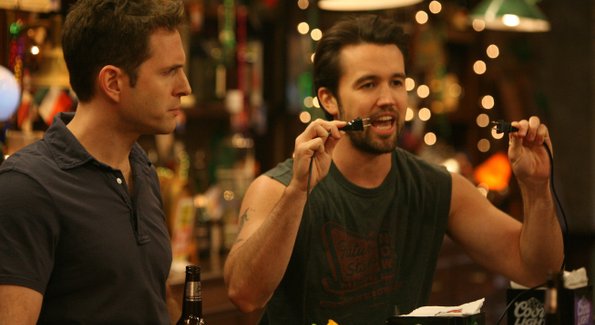 Charlie and Frank are pretty removed from the Mac storyline, that is until they both get injured and think of a typical Sunny way to deal with the problem. Charlie purposes that the two get married so he can be on Franks health insurance. This begs a rather odd question. At an earlier point in the show's history, the possibility of Frank being Charlie’s father was raised and if I am right, never really answered. Choosing to ignore that horrible possibility, the duo spends the rest of the episode arguing over whether or not they should go through with it until they meet up with Dennis later on.

Dennis and Dee are determined sleep with a pair of siblings they knew in high school, with Dennis wanting to get married and Dee wanting to finally hook up with her crush in high school. The guy Dee wants has let himself go and at first she rejects him. Later we find out through a funny yet a bit too long interaction with Mac that she did sleep with him. Dennis, after what we assume to be a couple of hours, decides to marry his old girlfriend at the court house where they meet up with Charlie and Frank. Sunny has always has a pretty ingenious way of making a point but hiding it in the absurdities of the plot. When Frank and Charlie compare the paperwork for their gay marriage to the one for Dennis’ regular one, Sunny makes its point. It's subtle and well made.

The end finds Dennis really regretting his decision, when his new wife’s faults are revealed. For a season opener, the ending is one of the weakest in the show's history, which leads me to one of my biggest complaints. It is obvious that this week's episode and next week’s episode, Dennis gets a divorce, are meant to be a two parter. This installment on its own isn’t terrible, but is it nowhere near the normal level we are used to and just falls a bit flat. Dennis just seems off, and while I admit that he is my least favorite character, I just couldn’t come to care about his storyline. The other stories were all at least interesting and hopefully there will be some payoff next week.

Sunny is back, but for a show I think so highly of, it didn’t really start off on the right foot. There are plenty of episodes left so maybe this week was just a rare miss.