It’s Always Sunny – The Gang Gets A New Member

Did you know that the gang had a whole life before the owned Paddy’s Pub? Yeah, I know it's sort of a dumb thing to say, but the show has rarely, if ever now that I think about it, delved into the past of our characters. We know that Dennis and Dee had terrible parents, but other than random one liners about high school we know very little about their past. In this weeks episode a past member of the gang resurfaces and the group dynamic is changed…..but in typical Sunny fashion… changed back.

The gang digs up an old time capsule they buried a decade before and a picture of the old fourth member of the gang, Smitty, leads them to bring him back into the fold. I personally love Charlie’s reaction. It is obvious that he doesn’t like the guy and he tries just a bit too hard to entertain. We all have that one guy that we hangout with and just don’t seem to get along. The show illustrates that feeling perfectly with Charlie, unable to cope, is pushed out of the group and his development is a much welcomed change.

When looking for a job, we see Charlie taking pride in his work for the first time, even if that work is janitorial. He makes no secret of  the fact that not only is he great at the jobs that no one else wants, but that he actually enjoys it. His interactions with Dee, while she is on her mission to teach high school kids drama…is pretty funny, especially her as Frankenstein’s monster. 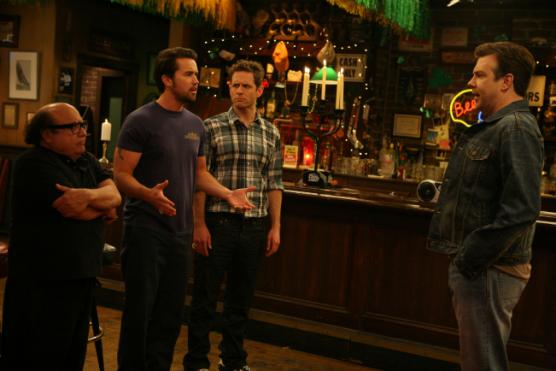 Meanwhile, Smitty shows himself to be a rather normal guy, making him a horrible fit for the extravagance and awkward gang dynamic. Dennis is constantly on the verge of tears when forced to confront somebody and Mac's responses get funnier and funnier. Looking at how this group operates on a day to day basis is ridiculous. Whenever they eat out Dennis orders for everyone and the creepy ritual of initiation is outlandish and while normally we would just accept this, through Smitty we see them for what they are...  really weird.

The funniest part of the episode was Frank's attempt to throw Smitty out of the moving car, his tiny frame propped up by the door and Smitty’s body is priceless and Smitty’s reaction and general apathy about the whole situation proves how ridiculous these character are. If we never see Smitty again it would be terrible, this episode made him one of the most interesting periphery characters.

The ending was pretty interesting because should they follow it up next week, then the group dynamic would still be shifted. Charlie doesn’t appear to want membership in the group anymore and while I doubt he will leave forever, this could be very entertaining. This episode was great and I hope they continue the storyline.