Jonathan Ross and Bryan Hitch to Create Comic for 2012?

By: | Comic News | May 20, 2011
This is not certain, but I am very intrigued by the creator-owned project that Bryan Hitch is trying to get going.  The question is would the project be at Marvel in their Icon line, or would he go somewhere else? Either way we know that the book is going to have some beautiful art with it. Also, the pairing of Jonathan Ross with Hitch should produce a very interesting book.

"Recently Bleeding Cool reported that Ultimates creator Bryan Hitch looked to be teasing a creator owned project for the summer of 2012. At the time I speculated this may be the long-expected Olympus project from both Hitch and oft-collaborator Mark Millar.

Turns out that was wrong. While I don’t have a title, pitch or a synopsis, I’m told by the kind of person who should know that Bryan Hitch’s project will written by British broadcaster and comedian, Jonathan Ross.

Ross has already co-created the comic book Turf for Image with Tommy Lee Edwards for Image, and the pair have a superhero project to follow that, Golden Age.

Bryan Hitch is normally associated as working for Marvel Comics and he may have a contract that prohibits working outside the company, so the new book may be published through Marvel Icon – that is, if Bryan Hitch is restrained by an exclusive Marvel contract next summer.

Neither Jonathan nor Bryan responded to enquiries." 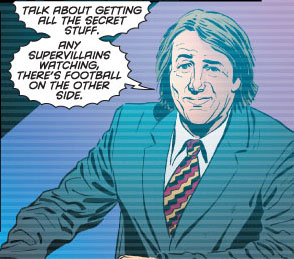