By: Mitchel Broussard | Movie Reviews | February 8, 2015
The Wachowskis have written and directed a total of five movies in the intervening years since The Matrix changed the face of the Hollywood action blockbuster. This is perhaps a cause for concern to some when, in the trailer for their newest sci-fi/fantasy action flick Jupiter Ascending, the studios still insist on boasting "From the makers of The Matrix Trilogy." Their movies are divisive, to say the least. They are big and loud and full of out-there sci-fi mysticism or just straight-up crayola crayon-barfed scenery (I still attest Speed Racer has some of the most bonkers-fun action sequences ever captured on film), but since the first Matrix flick, they have not exactly been "smart." Even Cloud Atlas, for all its multi-generational disjointed timeline shtick, essentially boiled down to: we gotta fight the power, man! Which brings us to Jupiter Ascending, a movie about a maid who discovers she's the reincarnated empress of a vast intergalactic ruling family who's the only line of defense between said family and Earth's ultimate destruction, naturally. Channing Tatum is a half-human, half-wolf "splice" with deus-ex-machina grav-boots, and a tendency towards being shirtless. A bunch of other great actors show up, from Sean Bean as a half-human, half-bee hybrid (don't ask), to Eddie Redmayne as the villainous Balem who either speaks in trembling whispers or over-the-top glass-cracking screams, and even Gugu Mbatha-Raw as a human-deer splice servant to Redmayne's Balem. 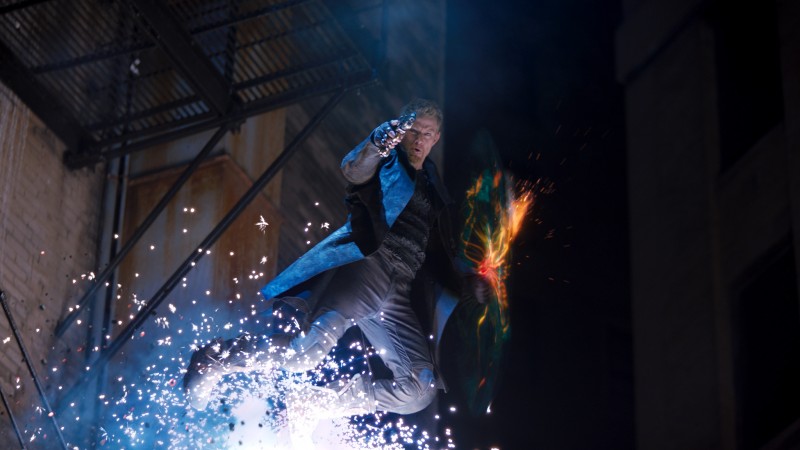 It's all very weird and silly and skirts over hilariously important details (like said Sean Bean as a bee-man) so fast in order to get to the next action scene, you forget why you were even confused in the first place. Which is to say, it's the best kind of stupid blockbuster: all the giddy enjoyment with none of the guilt once it's done. Its basic mythology is pretty intriguing as well, though not nearly dwelled upon long enough. The alien Abrasax family are essentially glorified real estate agents merged with farmers, trading and selling planets as properties whilst cultivating the planets of their most valuable resource (a major plot point that will not be spoiled here), and profiting off of it immensely. There are three kids in the family - Kalique, Titus, and Balem - whom Mila Kunis' Jupiter visits on a sort of elongated family reunion throughout the film. Jupiter, as the reincarnation of their mother, must navigate the familial politics - and a funny bureaucratic scene where she attempts to rightfully claim her title to Earth in a hellish alien DMV - in order to stop Balem from "harvesting" Earth. There's a delightful creepiness when even the nicest of the Abrasax siblings - daughter Kalique - discusses the genocide of a planet with the casual blandness a farmer must sound like when asked about harvesting a field of corn. The trio make for excellent villains, especially when you are not sure if even the nicest of them can be trusted. 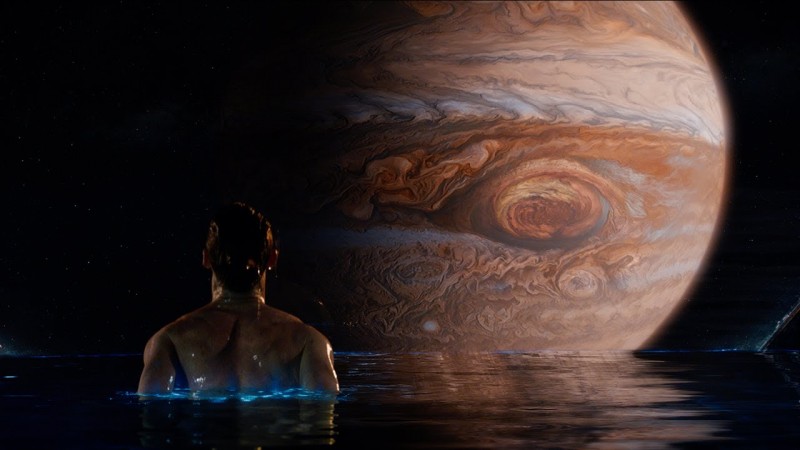 The pace is quick, as well. From an opening dogfight above the Chicago skyline to a multi-layered, goose bump-inducing finale that occurs within a giant mechanical palace and factory built inside a planet, there's hardly ever a dull moment. Even when the characters stop to talk and wade through the ridiculously byzantine dialogue attempting to explain the massive universe The Wachowskis have built, they are saying such amazingly silly things, and such amazingly silly things are doing the saying sometimes - there are winged, lizard dragon men in this movie - that the word "boring" is not even close to being applicable. But, it could be argued, The Wachowskis do not go far enough with the campiness a movie like this could, and should, have wholeheartedly embraced. The few moments of levity are either pretty funny (Jupiter claiming her love of dogs when Caine says he has more in common with a dog than a human) or pretty cringe-worthy (a recurring joke centering around a feminine hygiene product). There's a serious question to be had concerning Jupiter herself, eternally delegated in the movie to falling from some imposing, mythical structure to be saved by Tatum and his grav-boots. Jupiter has a few moments of self-perpetuating redemption towards the end, and in general is endearing and easy to root for, but, let's just say, Jupiter Ascending does not exactly pass the Bechdel test with flying colors. You get the occasional feeling that The Wachowskis may be hoping this is only the first chapter in Jupiter's story, that future adventures could see her become a bad-ass alien royalty princess and this first movie was only the first step on that journey. I hope so, because I want to see more out of this nutty little universe, but early reception and box office numbers don't exactly point in The Wachowskis' favor. 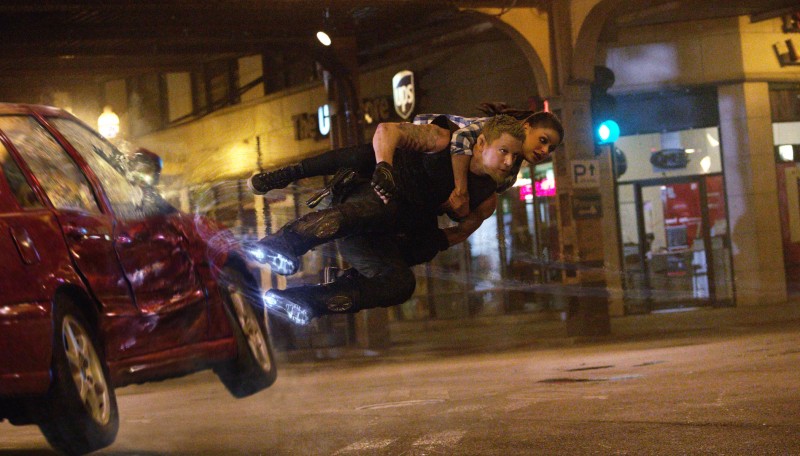 So, in the end, your enjoyment of Jupiter Ascending will directly relate to your tolerance for that rare form of heady stupidity only the makers of The Matrix sequels can pull off. There's genuine moments of high-dramatic action here, honest hair-raising sequences that I can see becoming - even in a year with both Avengers and Star Wars sequels - some of the most dazzlingly memorable action scenes of the year. It's just the story that links them together, while brilliantly mythologized, doesn't exactly live up to its beautiful scope and grand ideals. But, at worst, it's serviceable, and even better, it never hinders the action scenes in any noticeable way. This is the quintessential turn-off-your-brain-at-the-door action movie that lights up the early-in-the-year movie theater like a firework. It's not the greatest action movie, or the greatest space opera, or even the greatest romance, but its innumerable moving parts are so endearingly connected by such oddball tissues (again: Sean Bean is half-bee in this movie), that it's easy to be swept up in it all with a goofy smile on your face for the sheer fact that, in an era of sequels and reboots, this movie was made at all. Between everything going on - from mad-baby Eddie Redmayne to literally anything Mila Kunis wears - it's easy to forgive a misstep here and there for the sheer obnoxious hilarity of it all.
Rating
7.8
Pros