Justice League #14 – Review: A Kryptonian Were-Cheetah In The Congo

Justice League #14 continues the standard of quality that has come to be expected from the title since, let’s see, the last issue? Which is to say that there is actually some quality to this book’s main story. What follows within in these pages, however, does slip the book somewhat backward into its old tracks. If you thought that the last page of the previous issue, with the snarling face of Were-Cheetah Superman staring right at the reader, was as bad as it could get well then you’re right. These come close though.

At the heart of this are the conflicting influences of too many concurrent plots. Now this is no slight against stories that have many plots going on at the same time. Done well and it can be an interesting and engaging storytelling device. Here, however, it is not done well and instead comes off as clunky, unorganized, and a real mess. We get the second part of the Cheetah story, some more pages to deal with the whole Superman/Wonder Woman “romance”, and the set-up for the “Thrones of Atlantis” storyline. Johns, it seems, cannot perform the juggling and pacing act to handle the three and so the only part with any real tension and entertainment is the Cheetah resolution.

It wasn’t perfect, no, but it was genuinely enticing and had good tone set to it. There were maybe two moments were they maybe tried to hard to set down that this was “brand new” Cheetah, but overall I’ve found more enjoyment in this small story, actual enjoyment I mean and not snide enjoyment, then I have in the other stories that Justice League has provided. It was small, but at least it was done competently. The other two parts, on the other hand, were rushed.

It’s understandable that “Thrones of Atlantis” is so because its main story features in the pages of Aquaman, but the Superman/Wonder Woman romance is as dull as ever. There is one by-the-numbers “heartwarming” moment but Johns’ specialty is apparently not reader connection. It’s just so bland, and leads a moment that is going to be placed “out of context pages” threads on internet forums everywhere. Well, the main story of Justice League has always been bland when compared to its back-up.

The Shazam! back-up has returned after a one month break and must I say that it is still the best part of Justice League. Here is where Johns is able to put his good stuff without having to resort to cheap gimmicks or editorial mandates. After the full length Zero Issue it would seem to others that transitioning back to the short installments would be difficult, but then they would be wrong. As always Shazam! is short, sweet, to the point and everything that the main story usually isn’t. Coupled with the usual is the inclusion of two fantastic standout moments, one featuring the shenanigans of Billy and Freddy – who make a hilarious duo – and Black Adam. 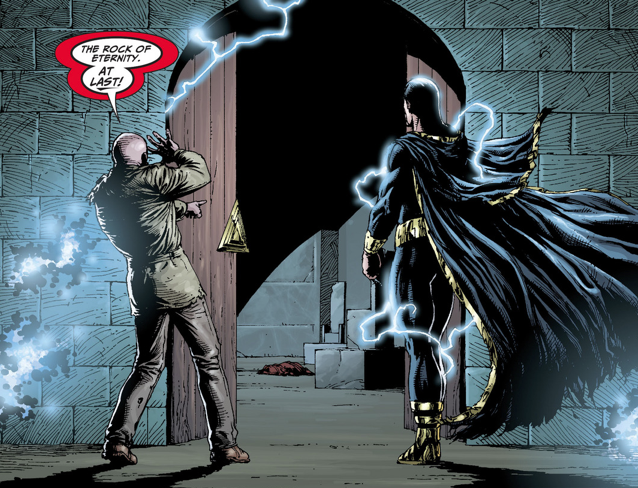 Now Black Adam has, largely, been reverted back to his black and white villainy, but there is still a tinge of the anti-heroic personage that proved so popular with fans. Seriously, the moment in question is going to elicit some squeals of joy from those who still hold that incarnation dear. Shazam! looks to be on the rise and the only reason why I still read Justice League. Overall this would be a little more than average issue if not for the back-up. Both have their pros, but in the case of the main story the cons severely outweigh them.