Justice League #15 – Review: The Water Is Actually A Little Safe

After battling the devilishly destructive Cheetah in what could be called a short “breather” of a story, Justice League #15 begins its first heavily touted crossover with Geoff Johns’ own Aquaman – "Throne of Atlantis"!

This issue again contains the same surprise that the beginning of the Cheetah two-parter from Justice League #13 contained, that the story contained inside wasn’t complete drivel. In fact there is definite possibility (ie. pretty much fact) that this is the best start a New 52 Justice League story has had so far. That might be due to Aquaman #14 having already done most of the leg work setting the stage so that the story can get a quick start here. There is no fuzz and the readers can get straight to the action. Usually this might be a draw back for some titles, but with Justice League one finds it’s a good way to bypass most of the pitfalls the book finds itself falling into. And like the Cheetah story this speeding up of events helps it to feature some actual teamwork.

The whole team gets a few character scenes in this issue, a rarity for one of the more touted books of that order. The jump to action necessitates them working together instead of giving time for yet another set piece of infighting – a running theme that has gotten old very fast. While the carry over into Aquaman #15 shows signs of this reoccurring next month, for now we are receiving a nice reprieve. The reader is treated to some actual scenes of heroism instead of offscreen and implied heroics. 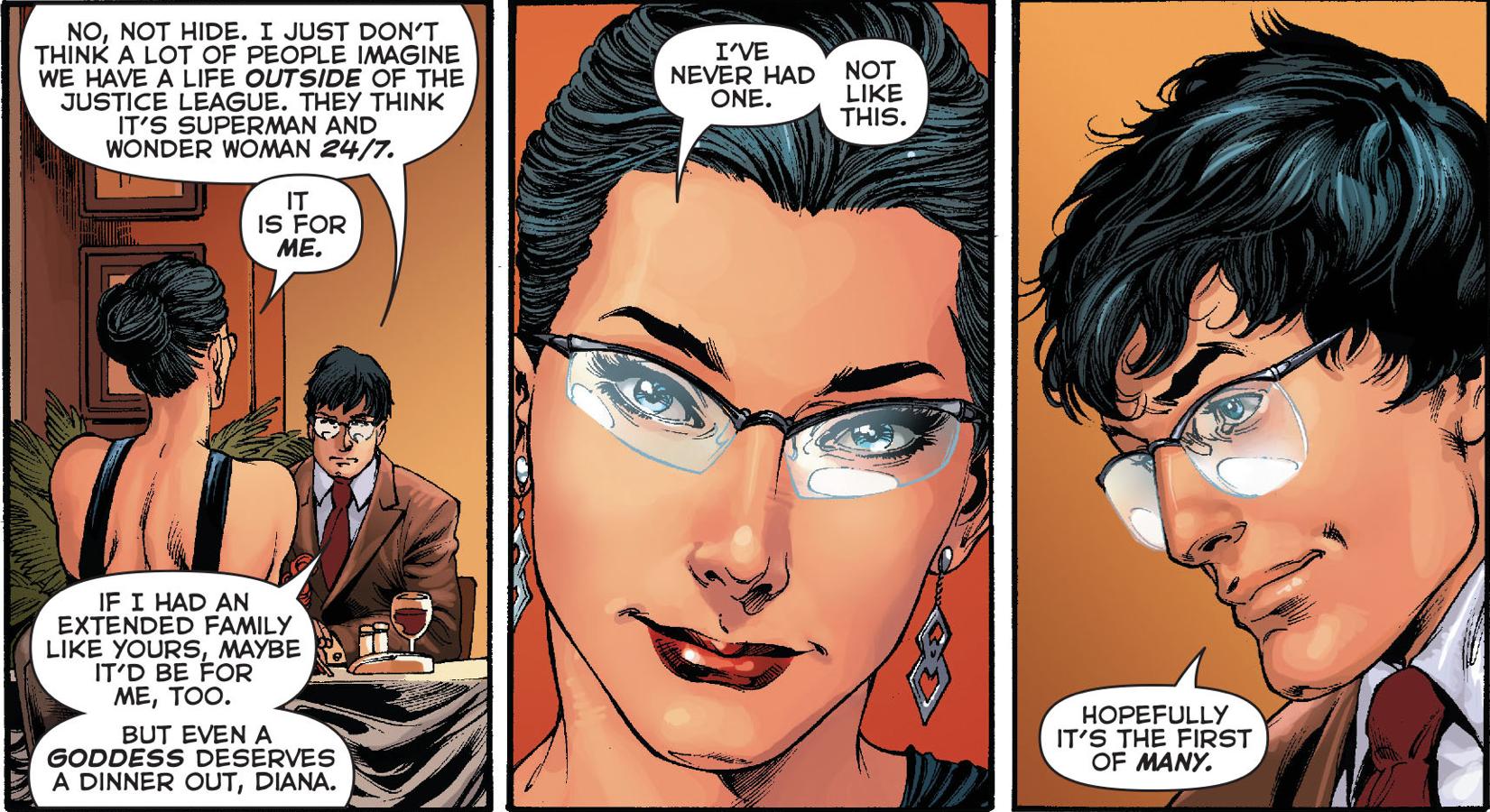 What this also helps to supplement is the still heated Superman/Wonder Woman in some variously interesting ways. This is, of course, a benefit given the calls from readers for the pairing to actually give reason for its existence. Again some more development is given, but unlike the sort previously given this actual has some heart to it. Only some, but it is a start. While many have noted that the personality differences between the Wonder Woman presented in this book and the one within her own ongoing are great, for the time being I will just base reactions on the one displayed here – just to be fair.

The Wonder Woman in Justice League proper has always been strict and battle ready at all times, never much giving way for non-super heroics. This very thing is what, in part, led to the downfall of her relationship with Steve Trevor. It is within this issue, and with the help of fellow compatriot Superman, that this whole screen comes down, if only for a while. It plays off as well as it could under the circumstances I have to admit. While the whole topic might not be solved by just the few panels and pages provided it does seem that Johns is taking the necessary steps toward actually making something out of it.

The main story itself is tightly written and constructed, which, overall, is a vast improvement over the starts of previous story arcs. We are given some great pieces that show the horrible devastation the Atlantean invasion which are able to elicit a great deal of emotion. Some of this is in part due to the new artist that makes his debut with this very issue – Ivan Reis. Already known for his time on Aquaman Ivan Reis has been able to draw new life into Justice League, and is already getting more positive response than Jim Lee and Tony Daniel. His work is simple, yet perfectly suited for a superhero comic. It is dynamic where it needs to be, but overall very vibrant, expressive, and alive. Justice League, if not anything else, sure flows a lot better in terms of art composition. There is even the debut of a snazzy new look for Cyborg, one that I personally prefer out of all of his others ones.

Now it’s on to my favorite part of Justice League – Shazam! The back up has once again continued to exceed expectations in all areas. Now that Billy has gotten his powers there is a definite feel that the story has found the groove that many readers had so sought early on. Things are beginning to roll, so to speak.

There is a zest and energy to the back up that is completely contrasts the somewhat still bored tone that Justice League has. It is as if Johns is saving all of his good writing for the book with what he has going on in Shazam! The little adventures that Billy and Freddy find themselves getting into are shown to greater detail here and they are just as entertaining as ever. It reads like a fun, poppy, kid’s movie and is perfectly paired up with Gary Frank's art. Some have commented that if there was some cheesy background music than it could have made a great 80’s movie in the style of Big, and I am inclined to agree. It’s an immensely enjoyable ride to see how they handle the outrageous new situation that they are in. 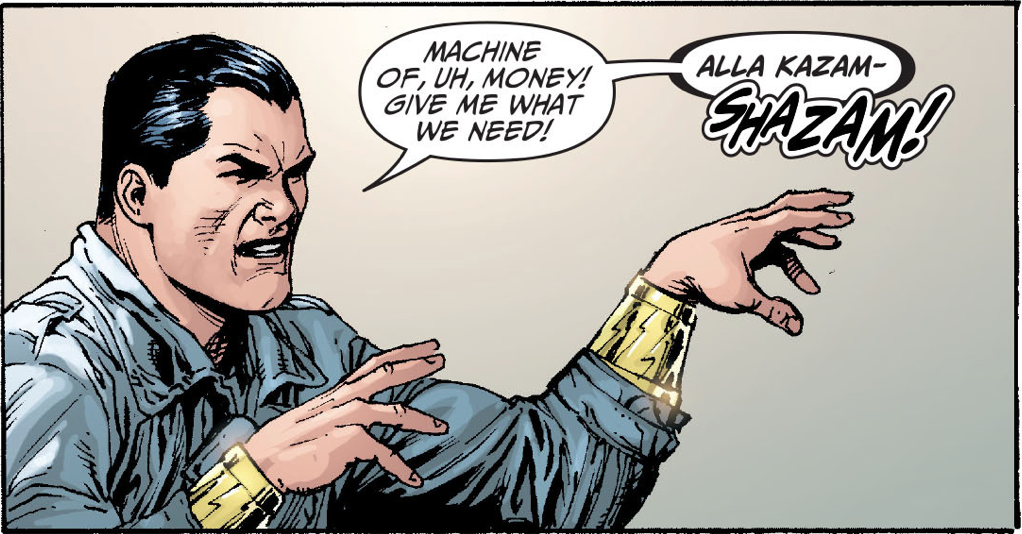 Billy’s character development is also pushed forward more with this chapter in Shazam! as he grows somewhat while giving his new gained abilities a spin. He seems quick to do the right thing, even if doing the wrong thing (but not too wrong) also appeals to him, so that aspect of him is given more of the spotlight. The stakes are being raised as well with Black Adam’s plans coming to light and were it not for the emotional connection that has been tendered by Johns (something else missing from Justice League) the there might not be reason to care. As it stands, however, it all makes for an exciting installment that followers of the backup will no doubt be energized by.

Overall this issue was a mixed bag. On one hand there is the best start a Justice League arc has had so far, some development in the controversial Wonder Woman/Superman arena, Shazam!, and good art on both fronts. The other hand however was that Johns’ writing is still only a little on par, being the “best” of an area so low already doesn’t mean as much, and overall the main story is only built up so as to float on the main Aquaman series – which is where the meat of the story is split up against, a small annoyance. Though, when judged according to itself, it is an appreciated rise. Perhaps it could even be classified as the start of a rise in general quality, but only time can tell.