By: | Comic Reviews | October 30, 2011
Justice League Dark was the series among the New 52 that I was anticipating most. Featuring some great, but underutilized characters, in a series that deals with the magical crises facing the world that the Justice League can't tackle is a great premise. Origins from DC's Vertigo label only added to the potential. The first issue did not disappoint. Now that we are getting underway with the New 52, is Justice League Dark one of the series to take a sophomore slump or is there still plenty of magic left?

Continuing the story from the previous issue, Justice League Dark #2 works to set up who the starring characters are and how they come together to stop the threat posed by an insane Enchantress. Now that all the faces are introduced, author Peter Milligan allows a little closer look at the inner-workings of the characters and what specifically they are doing. Unfortunately, the team is still all separate, which means that we jump around from character to character instead of what we might see with a more singular focus, but the scenes are still handled very well.

Zatanna and Constantine both decide to take meditation breaks in order to see what is going on, but they both do so in completely different ways. Whereas Zatanna gets out of her car and uses a backwards spell in the middle of town, John Constantine gets the crap beat out of him in a bar and then casts his spells in a seedy motel, both providing commentary all the while. They are both doing the same basic act, but the way they go about it shows not only the stark differences in these characters, but also in the way they perform magic. It's really cool to see just how different their styles are, despite having somewhat similar "powers," and alleviates any fears that such a team may be derivative of one another. Bear in mind, however, that the cover's promise that Constantine and Zatanna spend the issue "BURNING WITCHES" does not actually happen. 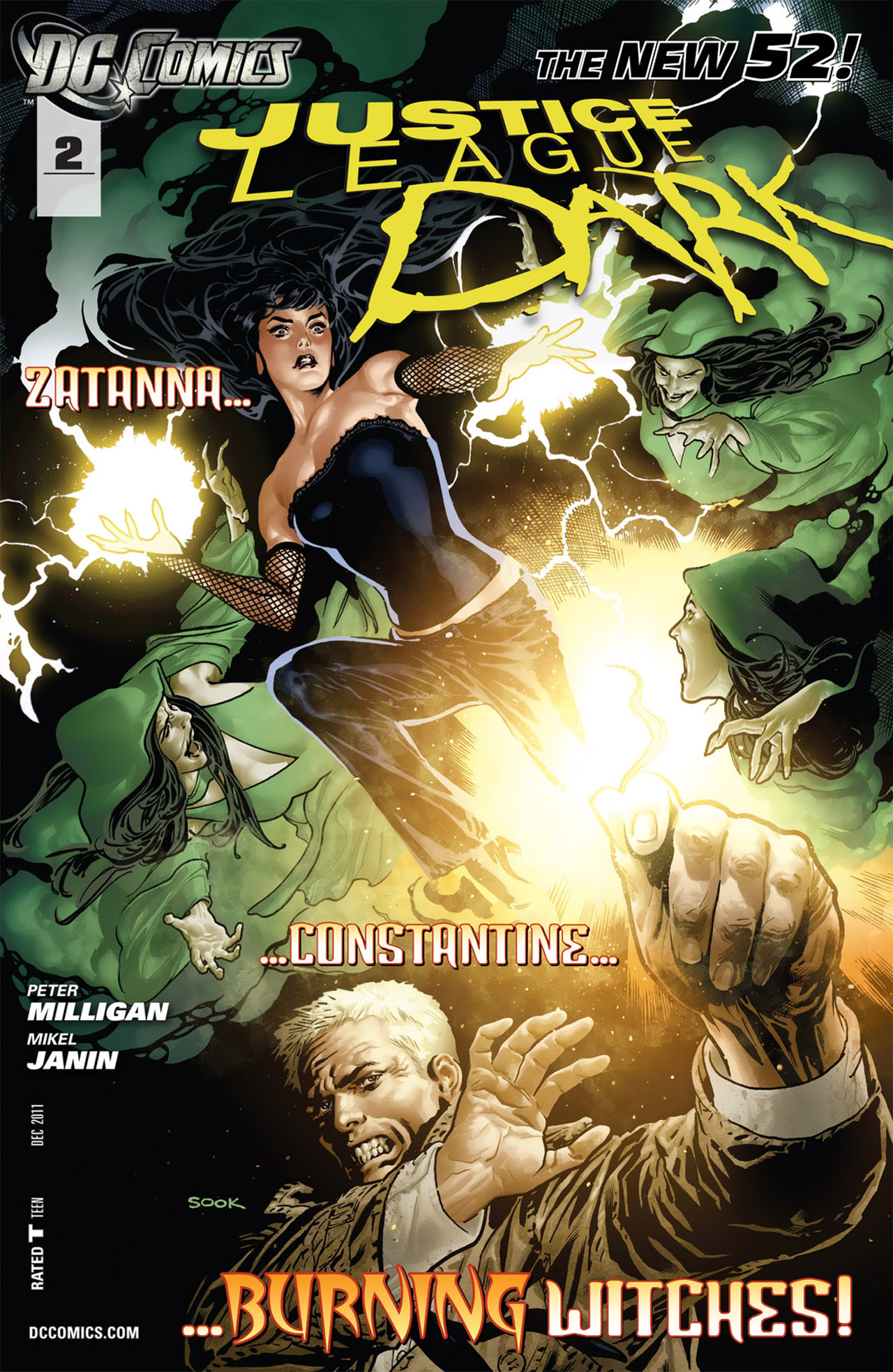 Shade the Changing Man is gone this issue, giving center stage to Boston Brand, aka Deadman. Before getting to magical disasters, there are a few pages between Boston and his girlfriend that reminded me a lot of a Joss Whedon work in its capacity to contextualize the human aspects of these bizarre characters in even more bizarre situations. Soon though, the couple are joined by the confused young woman from the previous issue who just happens to be one of Enchanctress's creations. This allows Deadman to join his other cast members in searching for answers by possessing the girl. This all leads up to the quintessential shocking revelation on the last page, and if it makes a difference, I legitimately didn't see this one coming.

All in all, Justice League Dark #2 is tremendous and even better than the already great debut issue. The story is progressing, the character arcs are progressing, and Peter Milligan is doing a great job bringing it all together. I almost take it for granted, but Mikel Janin's art continues to be gorgeous and serves as a perfect accompaniment to Milligan's script. Zatanna is recognizable and beautiful, even without her signature magician's outfit. Constantine looks every bit the hard luck magical loner, covered in wounds and wielding brilliant glowing circles of magic. The decrepit and insane Enchantress continues to provide a true chilling face to the magic disturbing the world. Simply put, this is what all superhero comics should look like.

We're still early in the series' run, but I've already seen more promise and progress than any other book in the New 52. Once this series gets going in earnest, look forward to something incredible. Until then, Justice League Dark #2 is still as good as it gets.
Rating
9.0