The JLI has always been a likable bunch of teammates, but in the Justice League International series there was no suspense or interesting storyline.  But with the combined writing talents of Geoff Jones and Dan Didio, this issue is not only suspenseful but has me gaping at certain pages… but is it really worth $5?

The Justice League International takes care of an important mission and heads back to their base to meet their two newest members and to get slaughtered by a powerful adversary: O.M.A.C., who has been taken over by Brother Eye thanks to a mysterious new programmer. 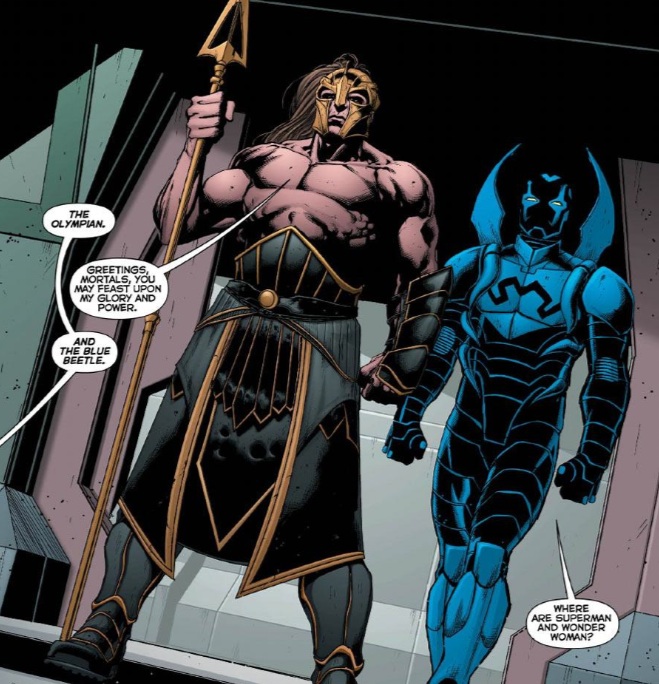 The opening of the story didn’t do much other than show two members leaving the issue so they wouldn’t have to fight in the main fight against O.M.A.C. – then two members are added. Why get rid of two members, then introduce two more? There was no need to add the two new members, Olympian and Blue Beetle, except  to add them to the crowded cover and hope their fans pick the book up. Is anyone an Olympian fan? But Johns and Didio do a good job with them.  Blue Beetle’s character is responsible for one of several cliffhangers, and the Olympian has a moment with Godiva and every piece of his dialogue is enjoyable over-the-top narcissism.

The rest of the story has a heavy air of mystery to add with an additional cliffhanger every other several pages.  Blue Beetle has his cliffhanger, the identity of O.M.A.C.’s new programmer is a mystery, and when Booster reacts even worse than I did when I heard Superman and Wonder Woman kissed it was a great moment that has me wanting to read Justice League just to see how the cliffhanger of it is resolved. 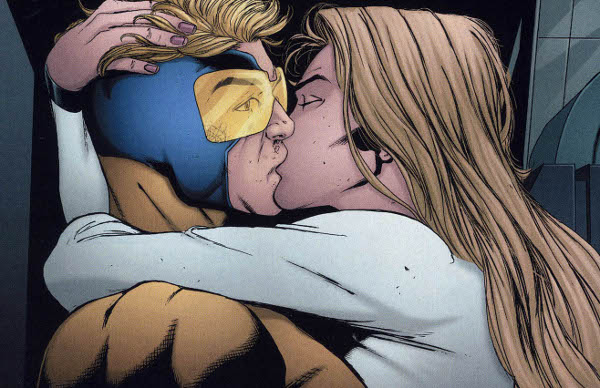 The main story was not exciting because of the fight between O.M.A.C. and the team, which we’ve already seen before in an issue of Justice League International, but because of the interactions between the team members. My favorite moments in this issue – aside from the awesome Booster Gold cliffhanger and the Brother Eye mystery – are the moments between Godiva and August General in Iron.  I love the General’s silent reaction to the dialogue going on between Godiva and her ex, the Olympian.  Another moment between the two was actually heart-wrenching and just added to the momentous suspense building up throughout the issue.  Their friendship is very moving, and if it weren’t for Godiva’s relationship with Booster I would almost think the two had deeper feelings to each other which I would like to see fulfilled in some issue. But Godiva also had a touching scene that revealed a side to Booster this series hasn’t explored before, but that the pre-New 52 has focused on.  I can respect that the writers made their relationship a friendship and didn’t try to shoehorn in a love triangle between Godiva, August and Booster.

Jason Fabok’s artwork is awkward in some spots.  His faces sometimes have out of place etches with awkward lips which are not helped at all with Jeromy Cox’s colors.  Caucasian skin tones look almost pink.  Godiva has terrible crow’s feet in some panels.  But I love how Booster’s hair looks like it’s been tousled by the wind.  The emotions on characters faces are pretty good, often adding to the touching scene, with the exception of some panels with Godiva who often has terrible crow’s feet thanks to the penciling. The background, thanks to the setting being in a base, is dark which serves to increase the feeling of suspense and seriousness of the story.  With combination of etching, crow’s feet and nearly pig-pink skin, the characters in the issue could use work, the artwork and colors in this issue may add to the dark tone with dank atmospheric colors but is mediocre in some spots. But it definitely improves on some of the previous artwork which had figures shining like cringe-inducing stars. 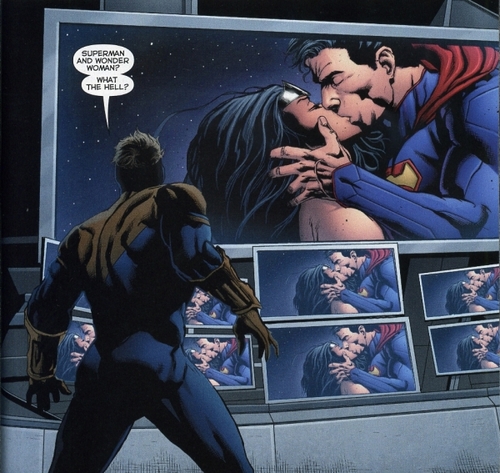 So is this title worth $5?  Yes. If you are a Booster Gold, Godiva, O.M.A.C. or August General in Iron fan, or if you read Justice League. Apparently this story will be continuing in that series: a bit disappointing since that technically means this entire issue resulted in basically the disbandment of the JLI and added another story arc to the Justice League, to the point where the issue is putting more emphasis on them then the very team the annual is named after.  But familiarity with the members of the JLI is what made this issue fun for me and made me glad that finally, after wasting money on twelve issues, I could read one for pure enjoyment and as a result ignore the flaws, which Johns and Didio often made better by glazing them over with plot twists and good characters previously developed by Dan Jurgens.  This was the fun ending that Justice League International #12 never gave me. A true ending to the JLI.