"Trinity War" rages on as the battle of the Justice Leagues and Pandora’s Box continues onward into the pages of Justice League of America! The World’s Most Dangerous heroes are finally sent into conflict with their main series gimmick.

It was really the above lines that made me interested in this particular chapter of “Trinity War”. For not only is it the only Justice League title that Geoff Johns puts even the littlest effort into, given that it contains certain pet characters, but it is also the fulfillment of the initial hook or conceit of the entire series. Whether or not this “ragtag” group of heroes and somewhat villains can work together and take on the Justice League. It’s an issue that could validate that very unstable premise, but does it? After months of buildup  - the answer again has to be no.

In fact the main fight, the one that has been on the series banner since the very beginning, turns out to be the least interesting part of this issue. It’s quickly pushed past and then forgotten as newer, no more interesting, developments arise. Now, to be honest, I wasn’t keen on the entire thing to begin with – in my opinion it was the most obstructive aspect of a series that was generally entertaining b-action movie fodder. Yet, it fizzles out in such a way that it makes that plot aspect, the only reason this series exists, and seem pointless – and it is portrayed in that way. A little attempt would have been nice but instead we have one “showy” two page spread, a handful of dialogue, and then it’s off the next setpiece. For a “war” there was really not that much focus on the fight.

Of course the strongest things that this series has had over its sister Justice League titles from the start has been its emphasis on character moments and dynamics. An aspect that does not find itself in short supply within these pages. It does a rather decent job of using small panels and moments to pull of better character beats than the first issue did, and that this is a “slower” issue works greatly in its favor. Hawkman, Shazam, Vibe – they all get their seconds to shine in the spotlight with the first listed always being a constant delight. Even main Justice League mainstays Batman and Superman, both of who were rather flat in the first chapter, get some good sequences. Especially Superman, who comes off as remorseful about the consequences of Justice League #22 in this.

What is really the defining part of this issue, however, is the spotlight it puts on the mysterious Question, who does indeed provide the narration for this issue. Outside of a few scattered “origin” pages this elusive character has only appeared within the pages of J.M. DeMatteis’ Phantom Stranger run, where he was only displayed in a villainous role. Here, on the other hand, it finally showcases his role in the greater DCU – that of a detective. While he still does have the stigma of the, admittedly ridiculous, “cursed by magic” origin the rest that has been shown is an intriguing mélange and blend of various Questions from the past. The standard O’Neill detective vigilante, the urban shaman of the Veitch stories, the crazed conspiracy theorist of the acclaimed Justice League Unlimited – it’s a mix that I want to see developed. Other than the backstory of this new version it’s a characterization that feels both familiar and fresh at the same time.

For the longest time, and since its very inception really, this series had had bad artists – from Brett Booth to David Finch, both have plagued JLA. So when news broke out that Doug Mahnke, of Green Lantern and The Mask fame, would be taking on the series with “Trinity War” it seemed like a godsend. The reality is, however, that Mahnke does not bring his A-Game here and when coupled with inconsistent inking (this issue alone had more than two) it creates and only serviceable experience instead of the great work that the artist can do. While still better than that which came before it – this is definite need for improvement and this was just disappointing.

Overall this issue may have been the one to save what was left of the first. While nothing special Johns, as said before, at least tries with this title and was also paired with co-writer Jeff Lemire – which brought this up a notch. The slowness helped it and it did a decent attempt at rationalizing the entire situation. Though at the core the only really good things were the small character moments and the focus on The Question. Better than the previous issue, but not enough to make me think that this will improve as it goes along. 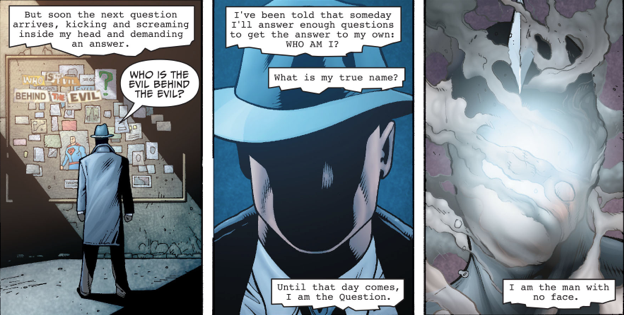