Here's a fun fact. The world record for extreme breath holding belongs to a Swiss freediver who didn't breathe for nearly 20 minutes (19 minutes and 21 seconds to be exact). Although I came nowhere close to that number, I'm pretty sure I held my breath for a good two minutes when Raylan Givens finally came face-to-face with Robert Quarles. I mentioned in my review last week that Justified is at its best when the show revisits its roots. Not only did "Harlan Roulette" exemplify the absolute brilliance of the writers (Dave Andron, Graham Yost & Elmore Leonard), but it sent us a clear message - this show means business. Justified is cutting through Tuesday nights like a hot knife on butter. Other shows, BEWARE!

I'm a little embarrassed to admit I've never read a single Elmore Leonard novel. But if his books are half as good as the storylines Justified is hurling in our direction, I'll be picking one of them up pretty soon. "Harlan Roulette" was one of those episodes that had the perfect balance between its procedural and serialized elements. But even the procedural portion of this episode had ties to season two. Remember the dude who set up Raylan to be ambushed by Dickie Bennett last year? Old wounds don't heal easily in Harlan County, especially if those wounds were inflicted on an already battle-wounded US Marshal. Raylan found himself on the trail of Wade Messer, the same dude I was just talking about. Messer and his partner J.T. were responsible for a string of armed robberies, with ties to the Dixie Mafia. What made this episode stand out from the rest was the utter audacity with which the writers introduced us to a truly formidable character like Glen Fogel (played by Pruitt Taylor Vince) and then took him away. Fogel ran a pawnshop that was a front for moving stolen goods to fund the Mafia's interests in Harlan County. He also answered to Wynn Duffy, Quarles' new second-in-command (and one of my favorite characters). The 'Harlan Roulette' scene was a stroke of genius in itself, but it also painted an instant picture of how sinister Fogel really was. You would expect a prominent baddie like him to be a recurring character on the show, at the very least. But Justified has made it a habit of introducing us to some truly memorable characters and then taking them away. It is, however, a comfort that the show seems to have a never-ending supply of them! 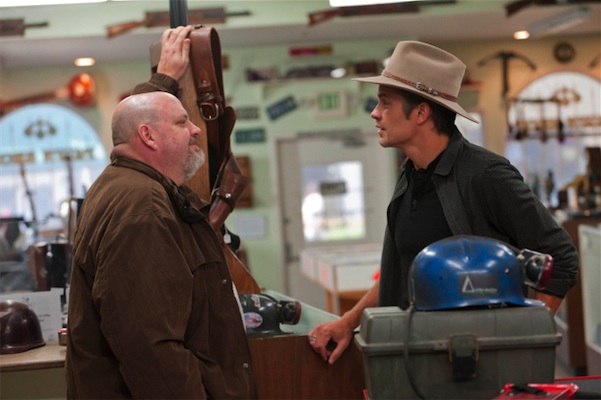 In my opinion, this episode had a lot of things coming together for most of the major characters on the show. It was like the writers hit the 'master reset' button after deciding to focus on the show's strengths. Boyd Crowder re-established his position as baddie numero uno in Harlan County, with a clear message to his cronies - The Crowder name will reach it's former glory, whatever the cost. And the Boyd we saw in this episode was a new, improved version of his former self - A wiser, more diplomatic Boyd, who if I'm not mistaken, is humbled by his past mistakes (in his own twisted way). After Carla Gugino's blink-and-miss (not to mention forgettable) appearance on last week's episode, bringing the focus back onto the two more intriguing characters, Ellstin Limehouse and Robert Quarles, was exactly what was needed. Although we still continue to be in the dark as to what Limehouse has planned for the future, "Harlan Roulette" took a significant step forward by clarifying what Quarles had in store for Harlan County. His plans for the resurgence of the illegal Oxycontin supply business made it clear he's going to be there for a while. And with Boyd's newfound enthusiasm to take back the county, it's only a matter of time before the two lock horns. However, the most important development that occurred in this episode was Raylan becoming his old badass self. After being shot last season, the writers have kept Raylan out of harm's way. Not that he was in any real danger in this episode. The scene between Fogel, Beckett & Raylan was another tribute to what Justified stands for - awesome dialogue coupled with a breath-stopping moment. Except in this episode, the moments just kept on coming.

I've mentioned before just how much I was looking forward to a showdown between Raylan & Quarles. The moment finally happened in the final scene, and it was absolutely perfect. What made it perfect was that all of us watching at home knew that Quarles was half a second away from putting an unexpected bullet through Raylan's skull. Would Raylan have seen it coming? Maybe. Maybe not. But his reaction to Quarles' smug disposition made it clear that he knew Wynn Duffy wasn't his real problem. Raylan Givens always gives the impression that he's in control of a situation. But his first meeting with Quarles displayed a tinge of uncertainty I believe I've never seen before. What a way to end the episode! 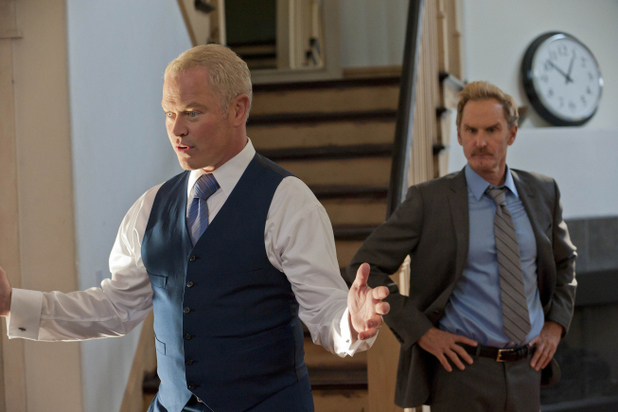 - The sole issue I had with this episode was the absence of Art, Tim & Rachel. Although the episode in itself was flawless, I really wish these characters (especially Tim & Rachel) get more screen time. There is a certain familiarity associated with Raylan & his connection with the rest of the marshals, and I think that link shouldn't be severed. Not even for a single episode.

- Pruitt Taylor Vince (The Mentalist & The Walking Dead) joins the amazing list of guest stars associated with this show, along with Carla Gugino & Desmond Harrington. Jim Beaver (Bobby from Supernatural) is slated to reprise his role as Shelby sometime this season. Will the awesomeness ever end??

- I can shamelessly admit I relished the sight of Raylan kicking Wynn Duffy's ass. Someone had to do it.

- Another fun fact. Guess which character James LeGros (Wade Messer) played in the 1997 TV movie, Pronto. You'll never get it. Not in a million years. Give up?? RAYLAN GIVENS!!

- There was a kid tied to the bed at Quarles' place (at least, I think he was a kid). What did the kid do? What did Quarles do to him? Do I need to ask more questions?

- I've mentioned this before, but I just don't see Raylan & Winona living happily ever after. At the cost of sounding unreasonable, their romance just doesn't sit well with what we've seen from Raylan's past. I get the distinct feeling something bad is going to happen, to one or both of them. Besides, a fairy tale ending for their romance doesn't make good TV. Raylan's a lone wolf, like it or not. Time will tell if I'm right.

The promos for next week suggest that Dickie Bennett will be the focus of the episode, as the race to grab Mags Bennett's stashed riches rages on. Expect to see a lot more of Limehouse & Quarles as well. And with Boyd's resurgence as a force to be reckoned with, things are definitely going to heat up. Raylan is going to have his hands full, and that's just the way we want it!