Justified – The Devil You Know

There isn't a show on the planet that flows the way Justified does. "The Devil You Know" was another one of those episodes that blurred the line between its case-of-the-week and season long arc as all the major characters decided to pitch in and give us another brilliant night of television. I don't know how, but you'd think it would be difficult for a show to be relaxing and engaging at the same time. Justified seems to be doing it effortlessly, not to mention consistently. Nowhere else can you find such a unique amalgam of characters, and nowhere else can you see another brilliantly written character like Devil get bumped off in the fashion we saw last night.

That's right. Devil's dead. In keeping with the pattern the show has exhibited recently, Devil, Boyd's former second-in-command, was unceremoniously executed last night (and with that, another beloved character bites the dust). And this was done by none other than the man himself. Devil and Boyd's back and forth didn't take up much screen time, but it did give us an insight into Boyd's current state of mind. Devil and Boyd had an interesting conversation in "Harlan Roulette" when Devil wanted to know which Boyd he was dealing with. Last night's episode gave us a clear answer. So is this a step forward for Boyd, or a step back? 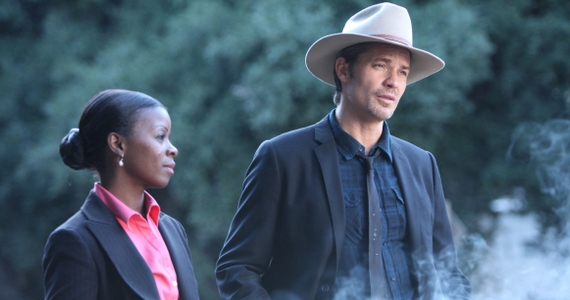 This Boyd Crowder bore a marked resemblance to the guy from Season 1 (before he was shot by Raylan and before he found God). This transformation was significant and it couldn't have come at a better time. Quarles is already flexing his muscles and reining in all his assets to seize Harlan County. A collision course between the two is in the cards and the suspense is killer. As for Devil (Kevin Rankin), his death might raise a few eyebrows on both sides of the law. Judging from the promos for next week, however, Raylan and the rest of Harlan have other issues to deal with, so his death might be temporarily swept under the rug. But you can be damn sure it's going to come up again. Someone's going to miss him, right? I know I will.

I think we've established that Mags Bennett's secret stash of cash is currently the Holy Grail of Harlan County. Everybody seemed to want a piece of it. So what happens when a group of bumbling morons with no discernible skills in connivery decide to pull off a seemingly simple caper? It wasn't as humorous as you think. It was a lot more humorous.

Normally, there's nothing funny about being run over by a car, but I'm pretty sure that I wasn't the only one grinning from ear to ear as Raylan ran into Ash—twice. The ordeal left Ash in a mangled heap of misdirected arms and legs, but it was hilarious. Raylan Givens is probably the only person who can make running over someone with his car look cool. And that scene was awesome, despite the fact that Raylan seemed to be one step behind the bad guys at every turn. As long as he does it with style, who's complaining? 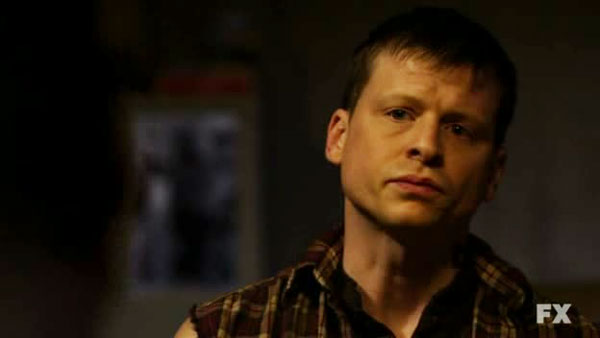 Meanwhile, with all the fun that was going on, the performance of the episode still came from Jeremy Davies. Dickie Bennett is a character I just can't get enough of and his whole BFF thing with Dewey Crowe is one of those relationships you just can't help rooting for. The scene at Mags' store between Dickie and the Combs' father-and-son duo was as good as it was hilarious. The dialogue was fantastic. Limehouse eventually came to Dickie's rescue, but it turns out that the secret stash of cash actually amounts to just about $42,000. That's two and a half million short of what Dickie was expecting. I was quite surprised by Dickie's reaction to whole situation. One thing you can be sure about Dickie Bennett is that he's not dumb. The wheels are already turning in that twisted mind of his and you can be sure that his return to prison is only temporary.

Raylan finally came face-to-face with Quarles last week and this time it was his turn to meet Ellstin Limehouse. The conversation wasn't as riveting as I expected it to be, but Rachel proved to have quite a nasty sucker punch herself when it came to matching Limehouse word-for-word. It was interesting to learn that Raylan's previous meeting with Limehouse wasn't as pleasant. I was a little disappointed that Raylan didn't follow up on the snapshot he took of Quarles and his teeth in Wynn Duffy's trailer. That rivalry has the potential of being absolutely explosive. The dilemma I guess the writers must have faced before filming this season is which rivalry to focus on. How about an episode where Raylan, Quarles, Limehouse and Boyd get locked in a room—unarmed? With Dickie Bennett holding them hostage? That would be fun to watch.

- Remember how absolutely devastated the "Supernatura"l universe was when a beloved character like Bobby Singer died? Devil's death was so brilliantly executed that I didn't mind it at all. It just fit so well with the story. If that isn't a testimony to how fantastic Justified is, I don't know what is.

- Boyd is now clearly aware that Quarles is planning to muscle in on his turf. So who's going to throw the first punch? Is there going to be another parley of sorts on the bridge where people keep pointing guns at each other?

- Art and Tim's absence just isn't working for me. The show is doing brilliantly without them for the time being, but they're great characters. Why are the writers holding them back?

- Raylan's quote of the week: "Let's see if I got this right. You managed to get bushwacked by an imbecile and an undernourished half-cripple?"