If there's one aspect of Justified that stands out from the rest, it's the show's simplicity. There are no terrorist attacks to thwart, no world crises to avert -- It's just a show about a badass US Marshal and the criminals he puts away. These criminals come in all shapes & sizes, but if I had to choose one of them to be my drinking buddy, it would have to be Dewey Crowe. It was about time that Justified gave us a purely Dewey-centric episode, since I believe the more we see Damon Herriman the better. However, despite our initial excitement, "Thick As Mud" felt a little underwhelming.

Justified?? Underwhelming?? Sounds ridiculous, right? But consider what the show has given us over the past few weeks. We've seen some truly memorable scenes between all the principal characters, the most recent one being the conversation between Boyd Crowder & Robert Quarles. "Thick As Mud" wasn't the best episode of the season, but it smoothened off the edges to prepare us for what's to come. This time, Dewey Crowe was Raylan's quarry of the week and we know that any opportunity to observe Dewey Crowe is bound to be entertaining. After the worst male nurse on the planet (Lance), threatened to sell Dewey's already extracted kidneys (yes, both of them) on the black market unless he came up with $20,000 in four hours, the episode kind of lost its way. Dewey's race to come up with the dough initially felt like the third installment of Crank (Jason Statham?? You haven't seen it? Come on!) but it did deliver some pretty hilarious moments. After a while though, it came close to a point where the show seemed to be making fun of itself. The charm we've become accustomed to was absent, as was the crispness of the plot. Dewey's eventual capture was however, a redeeming factor for the episode and I couldn't help myself from laughing heartily after the conversation between Raylan & Dewey. How can you not feel sorry for the guy? 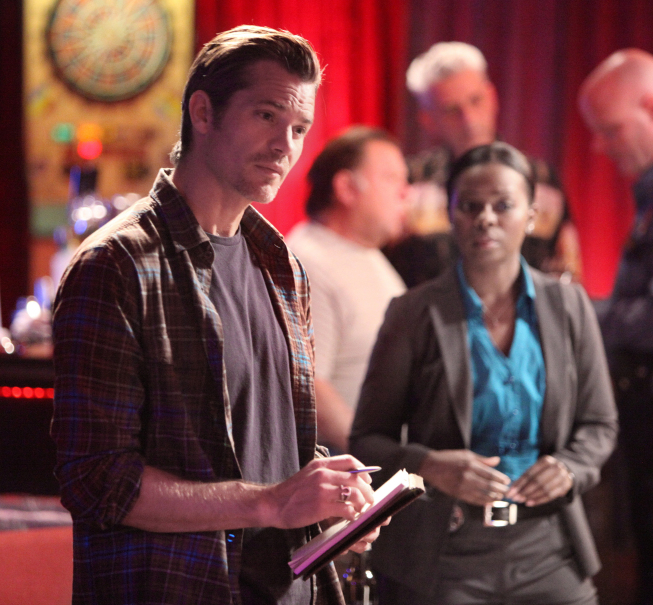 After Devil's betrayal and demise, the power struggle between Boyd & Quarles should have played a more important part this week. Although it didn't take center stage (with the whole Lance/Dewey business), Boyd & his posse were quite busy with things as they stamped their authority in the county. The bar scene where Boyd confronted Tanner (Devil's former drinking buddy) was awesome and made me realize that I'm actually rooting for Boyd on this one. Despite executing Devil the way he did, there seems to be a higher, almost noble purpose to what Boyd seems to be doing. His message was received loud & clear by an 'unarmed' Quarles, who spared no time in paying Boyd a visit. Have you ever waited for the other shoe to drop during a conversation? The sitdown between Boyd & Quarles was as tense as it could get, and although nothing concrete transpired between the two, we all got the sense that neither Quarles nor Boyd was ever truly interested in a partnership. This meeting was basically a chance for the two to size each other up and mark their territory. The subsequent meeting won't be as uneventful, you can count on that. This episode also gave us a closer look at what Ellstin Limehouse is all about. There's a good reason why his business seems to be running smoothly & unopposed. It turns out that Tanner's girlfriend Trixie has been keeping him informed about Quarles' (and now Boyd's) business. I'm still not sure where he fits into all this but rest assured, his presence is only going to make things worse for Raylan. And just to clear things up, Limehouse still has the rest of Mags Bennett's cash. Which means Dickie Bennett definitely has a role to play later in the season.

Justified has made it a habit of bringing in an awesome guest star every week. This time it was Layla (played by Maggie Lawson from Psych), a cute & adorable nurse who was taking care of a recuperating Ash (the dude Raylan ran over last week...twice). Raylan's initial meeting with Layla resulted in some unexpected chemistry between the two. The sparks were however, cut short when Layla turned out to be Lance's girlfriend and accomplice. After orchestrating Ash's death (Booo! I liked Ash), Layla was cool as a cucumber when Raylan dropped in for a visit. The subsequent scene involving Raylan's capture, again ventured into the realm of the comical. Let's be clear -- for all practical purposes, Raylan Givens is invincible. But even Lady Luck doesn't have the smarts to literally place the gun in Raylan's lap (although the gun did come with Lance's corpse), not to mention that Raylan was tranquilized at the time! I burst into laughter a second time during the episode when Art said "So she shot him. You shot her through him." An interesting point to note is that Layla isn't dead, which means there's a chance she could be back for another episode. As could Fletcher "The Ice Pick" Nix. 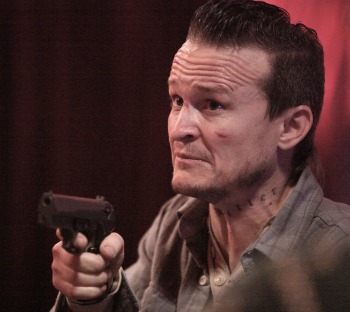 - "You mean I had four kidneys?" I had to pause my DVR for about 20 seconds to finish laughing. Seriously, someone should give Dewey Crowe his own sitcom!

- Art's back! After tuning up Terry Powe a few episodes ago, I thought Art had pulled something. Glad to see him back & fit as a fiddle.

- Am I the only one who's sad that Ash's dead? I loved that guy! Kidneys - The cadillac of beans. I have to remember that one!

- So what was in the note Raylan discovered after coming home? Did Winona leave him...again? Or is the sinister hand of Robert Quarles (or even Wynn Duffy) behind this?

I don't think I need to repeat just how awesome Justified is. Despite a comparatively weak episode, this season has all the ingredients to be the best one of them all. If you don't believe me, tune in next week and see it for yourself!