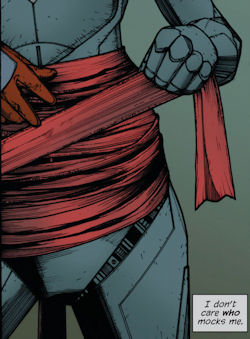 Those coming to Katana because of an interest in Justice League of America aren’t going to be satisfied with what’s in this issue. Don’t expect any kind of sneak peeks or even references to what might be going on with the new series soon to come from Geoff Johns and David Finch. Despite being hyped as essentially a tie-in to that book, there’s nothing really about it to be found in these pages. I don’t think it’s unfair to hold that against Katana. Readers are being lured to it because of Justice League of America, and it’s really not offering anything in that regard.

Now, this is where I would usually start critiquing the story. I have a problem this time, though. It’s one I’m not quite sure how to address. I’ve actually read this issue a couple more times to try to get out of having to say this. But I haven’t had much luck there. So here I am.

I am almost clueless about what is going on in this issue.

Seriously, I’m struggling big time to follow this story. I can only get so far. Katana comes to San Francisco in order to see this girl’s full body tattoo of some history related to her Soultaker blade. And that’s all I got. I don’t understand why. I don’t understand what Katana does or doesn’t already know about her sword. There’s this guy called Coil and mentions of some ninja clans, but it’s frankly all so cliche that nothing stands out to me. I feel like I should have known much more about Katana before picking up this issue, which isn’t exactly an ideal thing to have to say about a first issue.

Oh, wait. I also might know how Katana lost her virginity. So there’s that too.

But ultimately, I spend more time trying to follow the story than I do enjoying any part of it. There is apparently a conflict here, but I’ll be damned if I could tell you what it is about. All I know about Coil is that he comes off as annoyingly chauvinistic, and that honestly seems like kind of a cheap trait to put on the antagonist of a female lead’s book. Kind of like making the villain in a black character’s book a racist. I wouldn’t go as far to say it shouldn’t be done. But for an opening story, it comes off as disappointingly cheap and uncreative.

Also, I’m far from an expert on modern Japanese culture. Actually, I probably know precisely crap about it. Yet, I feel like I’m being smacked in the face by outdated Japanese stereotypes and cliches all through this issue. Katana is already a fairly stereotypical Japanese character. There’s unfortunately no getting around it. Take away all of the stereotypical bits and there’s just not much left of her. So you’d think it would be a good idea to try to balance that out by not surrounding her with even more of it. Instead, this issue has ninjas, clans and everyone seems to be wearing a kimono. Anyone who thought the character was too much of a stereotype before sure isn’t going to have their mind changed.

I’m afraid I can’t let the dialogue go unmentioned either. Katana’s dialogue gets fairly awful in some scenes. It’s almost as though Ann Nocenti has no faith in the art to tell her story. I mean, she actually has Katana wake up from a nightmare shouting, “A nightmare!” What is that? Is that really necessary? But considering the nightmare began as a sex dream, I guess Katana could have woken up shouting something far more awkward.

Then again, at least that would have been entertaining. 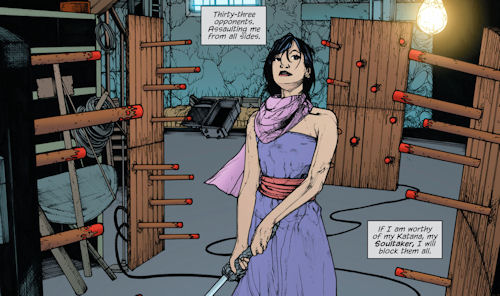 The art by Alex Sanchez reminds me of the recent issue of Green Arrow. Not for its style but for how DC again makes the decision to go without a separate inker and how the art suffers for that decision. I can’t help but think the art wouldn’t be so unpolished and inconsistent if DC had brought an inker on board. Or maybe I’m wrong and it would look unpolished and inconsistent no matter what. There are actually several panels or pages that look really good. The problem is there are many others that don’t. Facial expressions can get particularly strained and awkward at certain points, including Katana’s eyes looking like they are about to bug out of her mask.

Look, this is not how it should be done. Katana is not an unheard of character, but she is fairly obscure in the grand scheme of things. The first issue of her solo series needs to be an introduction. It should not read like I’ve been dropped into the middle of some convoluted story with a character who is a stranger to me. It also shouldn’t be riddled with cliches that a more modern take on the character should be trying to grow away from. I’ll admit to never being much of a Katana fan. But after reading this issue, I’m even less interested in the character.