Quentin Tarantino’s Django Unchained has been coming along smoothly, but there was one thing missing: a female lead. Normally leading ladies are just there for sex appeal, but this one is integral to the story, providing a basis for the film’s narrative. Luckily, Django found his wife in Kerry Washington.

Deadline Hollywood breaks the news that the actress, who’s notable for her work in Ray and Lakeview Terrace, entered negotiations with The Weinstein Company last evening for the role of Broomhilda, Django’s slave wife. Tarantino was interested in having an unknown sign on for the part, so she might be a discovery along the lines of Mélanie Laurent or Christoph Waltz from Inglourious Basterds, but he’s been considering Washington for quite some time. 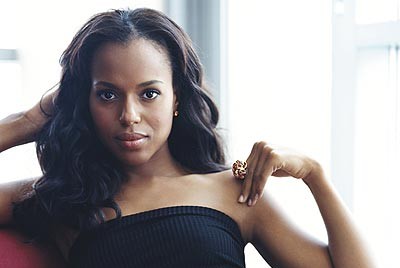 As one privy to the story of “Unchained” already knows, a bounty hunter trains Django to fight so he can rescue his wife from the treacherous Calvin Candie. Jamie Foxx, the aforementioned Waltz, and Leonardo DiCaprio are respectively on board for the roles of Django, the bounty hunter, and Candie.

Washington delivered some terrific work in indie films Mother and Child and Night Catches Us and also made an impression in For Colored Girls, even though her role didn’t carry the gravitas of those occupied by Kimberly Elise and Anika Noni Rose.

She should make for a terrific addition to this cast, and it should be interesting seeing her and Foxx in an entirely new light, as the two also played husband and wife in Ray. Plus we might finally see her receive her first Oscar nomination, as Tarantino films tend to pick up awards season hype.