This is the last issue of Kick Ass 2 series. So, we knew that this would be a big battle between Kick Ass and Red Mist. I was excited to see how this series would end and see what would happen if there is going to be a Kick Ass 3. 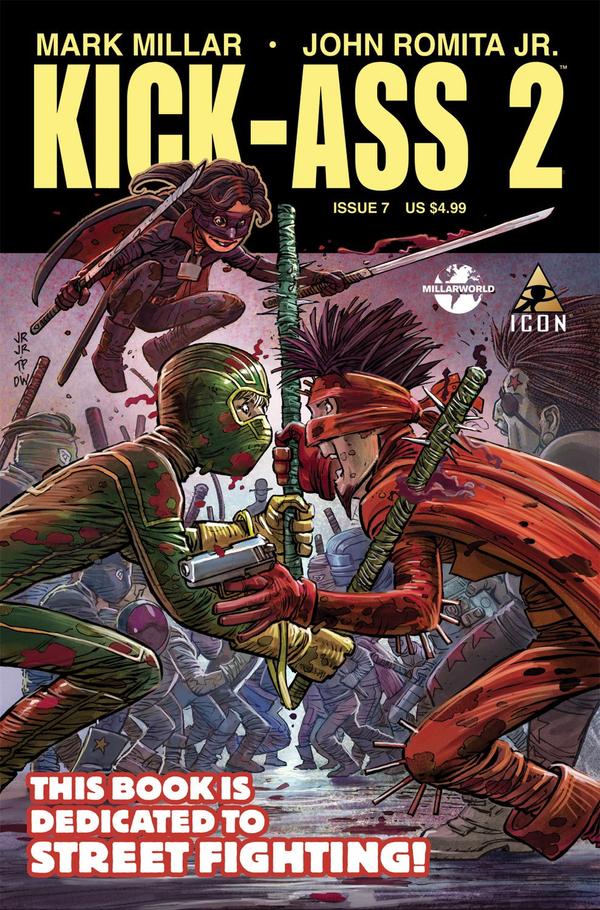 As I said before I knew this issue would be a big battle between Kick Ass and Red Mist. A sure sign of this happening was the cover. We get to see a lot of chaos around Red Mist and Kick Ass, and they are ready to have a battle royal. I thought the art for the cover was really great also. You can see that this was going to be a very gruesome issue by just looking at the cover. I think that is great thing because a lot of people pick up Kick Ass because they want to read a series that is very gruesome.

In this issue Kick Ass and Red Mist have a big fight in the middle of the city. As all the superheroes and villains fight each other the cops are after every masked hero and villain. The people of the city say that the masked heroes and truly heroes, but the police believe other wise.

The only thing I did not like about this issue was that the beginning I thought was kind of slow story wise. There was a lot of action, but I was afraid that there was not going to be any story. But I am glad that the story picked up towards the end.

The art was great for this issue. I really love the gruesome art for this series. It makes the series different from a lot of series that are out now. I usually am not a big fan of John Romita Jr.’s art. I actually avoid comic books that I know he would be the artist for, but I think Kick Ass is his niche. He does great art for the characters of Kick Ass. His art really sets the tone for the series.

I recommend you guys to pick up this issue. If you have not been reading Kick Ass it is a great series and very different from series out today. Kick Ass is in there own category of greatness. Pick up this issue!