With a name like “Kill Shakespeare” I wondered what type of a story I would be getting. Would it be set in England and deal with a man trying to kill Shakespeare before he could create his greatest works? And is that interesting? I never imagined that it would be a world in which all of Shakespeare’s characters and creations lived side by side and that the goal of the book was to actually kill William Shakespeare.

The story opens after the events in Hamlet. He’s just killed his father’s friend and his mother is now lying in the bed of the man who killed his father and current king of Denmark. Hamlet is banished from his home and sent to England. He’s very remorseful that he killed an innocent man that was a true friend to his father and did not get the revenge on his father’s killer. Hamlet spends his final moments at home visiting his father’s grave, until he is visited by a vision. A witch calls him forth with his father’s voice and calls him a murderer. Hamlet pulls his sword and strikes at the witch, for the accidental death of Polonius was not murder but mistaken identity. In Hamlet’s heart of hearts he knows that he takes no joy in death and is mournful for Polonius’ death. 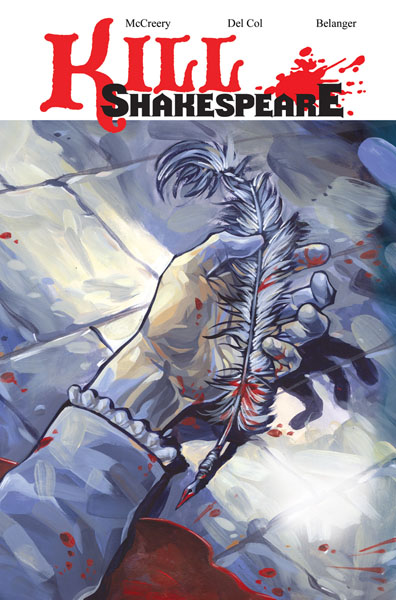 Never the less Hamlet must leave his home or be killed. He sets sail with his two best friends Rosencrantz and Guildenstern who are to make sure he reaches England. As the ship sails Rosencrantz asks Hamlet what his motives are for when he reaches England. If he means to raise an army and come back to Denmark and over throw his Uncle. Hamlet informs him that he has no such plans and misses his father to much to think of such plots. Rosencrantz informs him that they were asked to deliver a letter to the king of England that would have him kill Hamlet upon arrive, but being his true friend he’ll make sure the letter never makes it there.

Later in the night the ship is attacked by pirates and the entire crew is lost with the exception of Hamlet. Thrown over-board he finds himself stranded at sea. He awakes on a beach with three woman draped in black standing over him. They declare that he belongs to them until a shadowed figure steps forward and announces that he actually belongs to him. Hamlet wakes again, this time in a strange bed. He dresses quickly to flee the bedchamber when a king walks in and address him by his name. He is King Richard the third and he knows of Hamlets arrive due to a prophecy foretelling it. He walks Hamlet through his court and explains that Hamlet is the Shadow King that is destined to kill William Shakespeare. A man that some call creator and treat as a God, while others feel he is an evil rebellion used against King Richard. 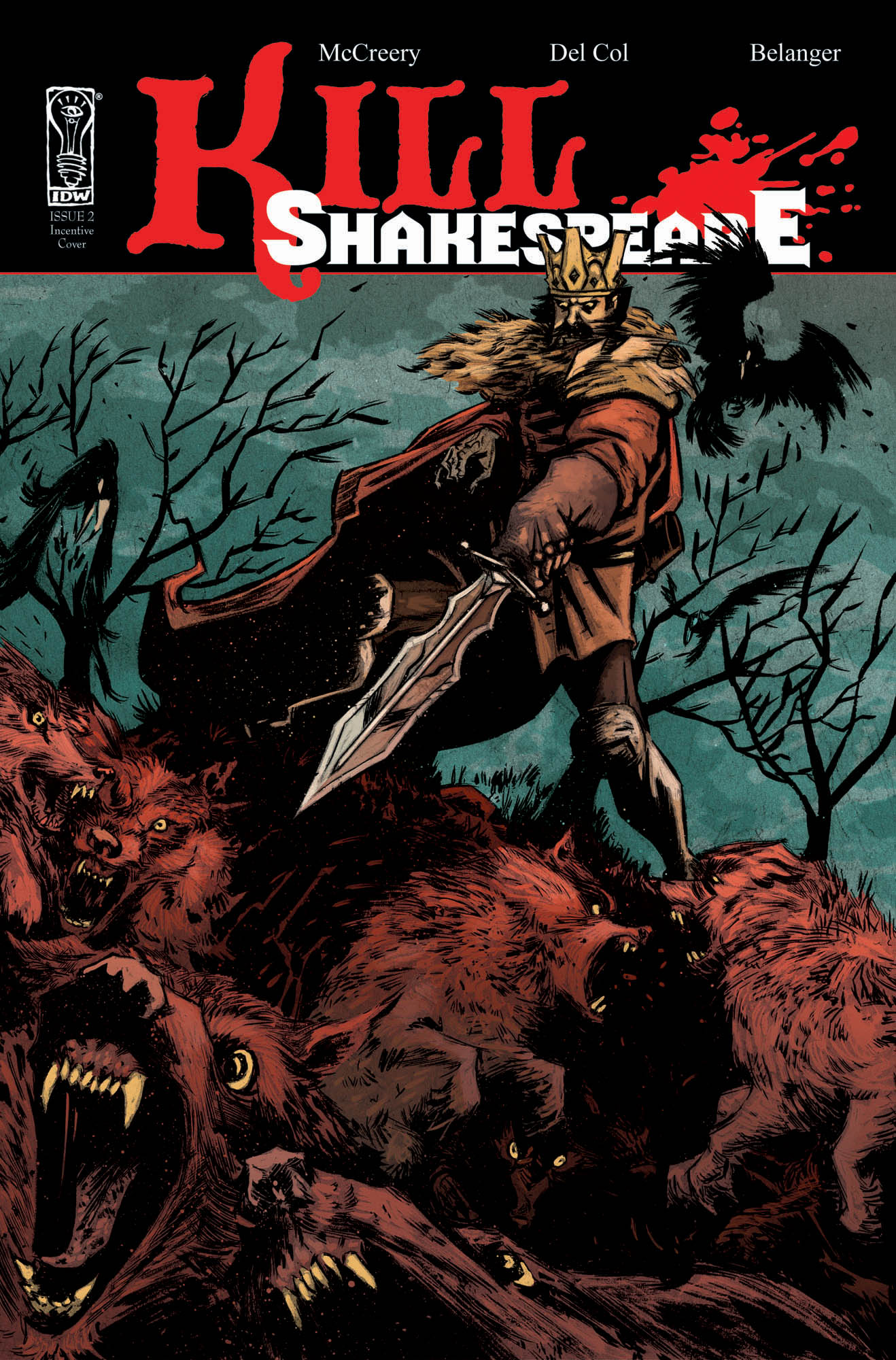 Hamlet says that he will kill no man, but Richard offers him the life of his father in return for his services. Hamlet doesn’t understand why he needs to find and kill Shakespeare to which Richard informs him that only Hamlet can find the way to him. After some debate Hamlet accepts his offer after Richard brings one of his fallen shipmates back to life in front of him. Little does Hamlet know that the witchcraft presented before him is false and the person “brought back to life” is actually just an illusion casted upon Lady Macbeth who is very much alive. The next day Hamlet, Richard and his men set out to find Shakespeare. Hamlet is still uneasy of the task before him and cannot seem to magically “find” the way to William. Richard calls up one of his top men and advisors Iago to speak with Hamlet.

Iago has Hamlet rest his mind and control himself for a moment. Hamlet stops thinking about being in a strange land with a veil task before him and to clear his mind. As he does the forest opens a path not there before which astonishes everyone. They begin down the path until night fall. They set up camp and everything seems fine until there is an attack on the camp from some of Richard’s own men trying to kill the Shadow King aka Hamlet. He flees the camp as his three attackers follow him. He runs into a plump man dressed in red that grabs him and hides him underneath a forest ledge.  After the danger has passed he knocks him on the head and drags him away. Meanwhile, Richard must return to his kingdom to deal with Macbeth who is wavering on their arrangement. Iago is left in charge of the men and he and his three agents dispatch the rest of Richard’s men showing that he’s not someone to be trusted. 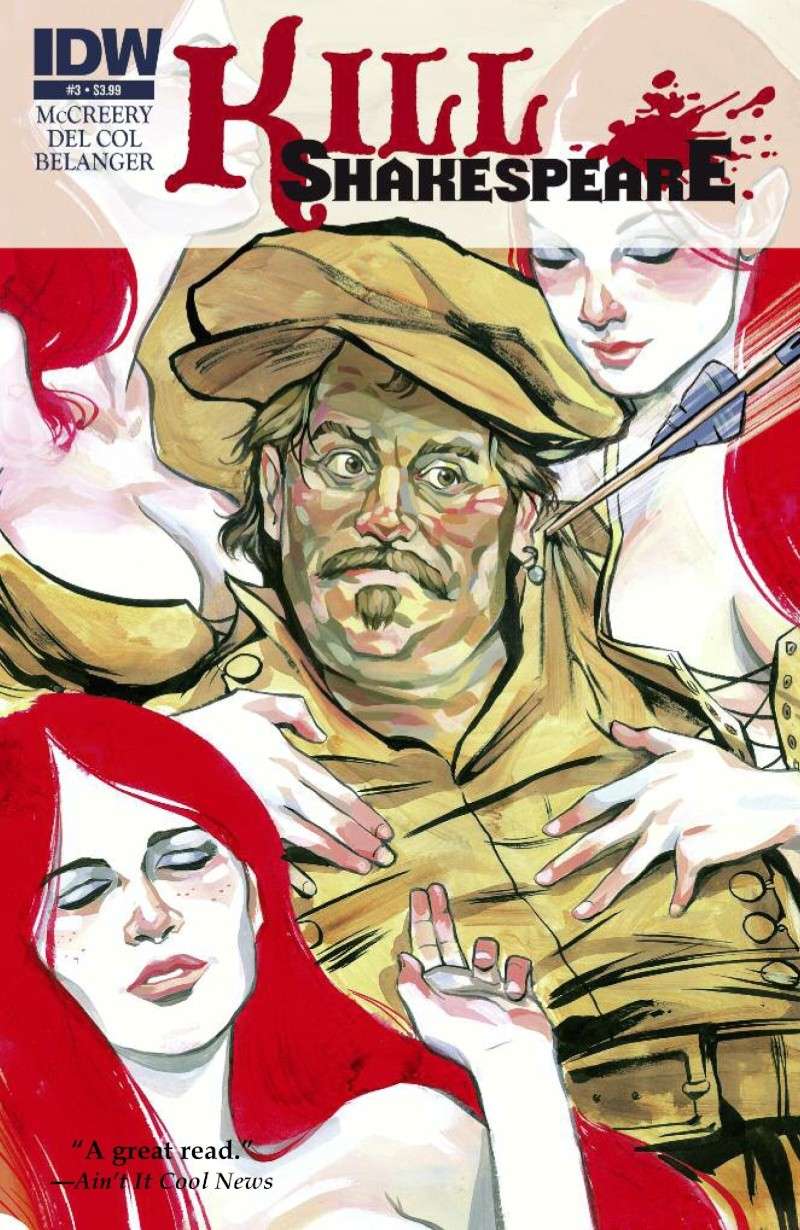 The next morning Hamlet awakens in yet another unusual place with the plump man standing over him offering breakfast.  The man’s name is Falstaff and he’s there to save Hamlet from his would be friends. At this point Hamlet doesn’t know which direction is up, who to trust and where he is. Hamlet tries to relax his mind to find his path again, but this time it doesn’t work. He ends up accompanying Falstaff as he has no better options. They reach a stream and come across Puck the forest sprite. Puck spouts… well Shakespearean dialog with hidden meanings and prophecies, but calls Hamlet the chosen one. After a long trip and crazy adventure that winds up with Falstaff and Hamlet wearing dresses they find themselves meeting with Juliet of the Capulet’s and Othello. Once before them Juliet does not find Hamlet to be the prophesized savior that they’ve been waiting for and Hamlet will have none of her tongue lashings.

If there’s one thing about “Kill Shakespeare” there are plenty of twists and turns that do justice for the Shakespeare part of the title. It’s strange to see so many of Shakespeare’s creations all sharing the same page. I’m sure there’s plenty of other characters that will make appearances as the series continues on. Already there is the mention of Titus and King Lear. Also it seems only fitting that, “Where art thou Romeo” makes an appearance in the book. There’s obviously some tragedy that befell him, but it’s too painful for Juliet to speak of it. 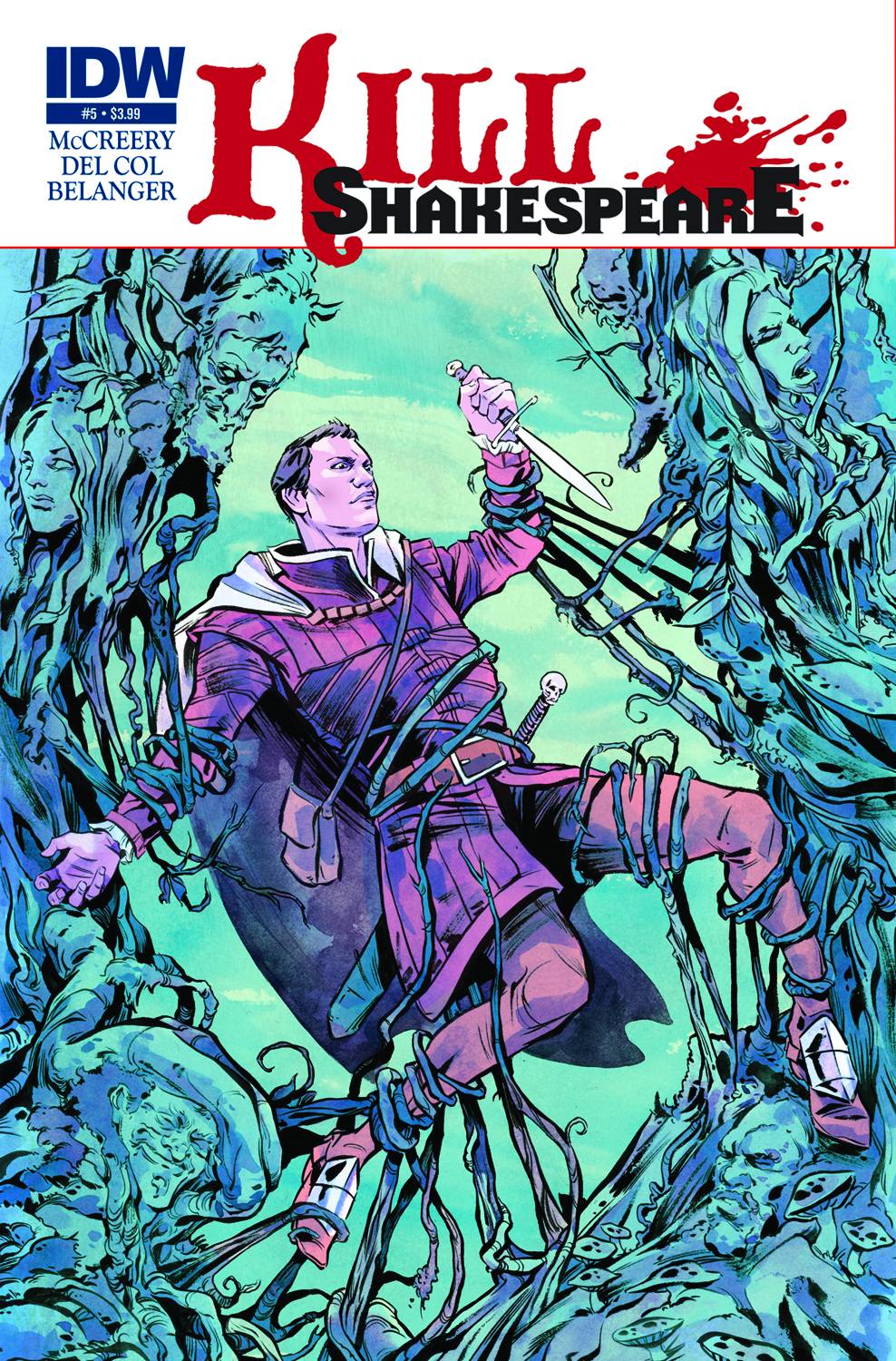 The writing is amazing. It’s one of those simple concepts that you hear about and think, “Why hasn’t anyone thought of that before?” Well more than likely because they didn’t have a story worth a damn that they could use the characters for. Conor McCreery and Anthony Del Col have put together a story that is wonderfully crafted. They use biblical allegories that are subtle and yet piquant. Instead of characters saying, “Thank God” they say “Thank Will” which can be over looked simply on the bases that they are all fictional creations of his. There are other references to be picked at, but they are not touted in front of the reader. The writers do a good job of taking these characters in which most are only familiar with by name and give them real personalities and characteristics. They estenially bring them to life in a way that only Shakespeare has done before.

Hamlet is used to walk the readers through this foreign and unfamiliar world. He is as clueless to what is happening as the reader is so they discover everything together. Granted the writers give the readers more details than Hamlet, it doesn’t stop them from sharing in his journey as he tries to find his way in a world that is mad to him. What I rather enjoyed is that there are mentions of kings and rulers, but no one mentions the land in which they represent. Hamlet is the only one with a country everyone else speaks of ruling an area of land but never England or Rome or any other land mentioned or covered in Shakespeare’s works. You would think that someone would bring it up, but it's as if the characters know that they are no where. 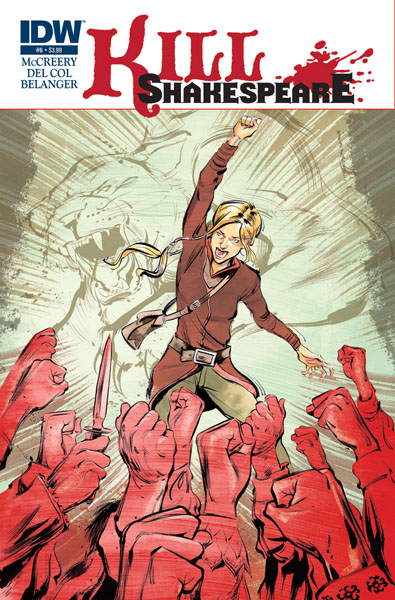 The penciling for the book is made up thick lines with harsh edges that are fitting of a horror story and in a way this is a horror story. There is so much death and gore in this series that if just simply picked up and flipped through you probably wouldn’t understand the context in which these horrors happen. That’s not to say that there is gore on every page of the book, but there is quite a bit of death sprinkled throughout the pages. Andy Belanger does a good job of matching the amazing story, but his pencil work just isn’t as good as the story. It’s okay though because he makes up for it with being a great visual storyteller that blends magic, swords and most importantly conversations together flawlessly. A large part of the pencil work is also greatly improved by the coloring from Ian Herring. The pallet selected for the book is generally darker tones with spots of brightness in-between. The color really suits the dark tone of the book and adds a level of emotion that would otherwise be lost if the book was black and white.

The first volume of “Kill Shakespeare” is something special for sure. There’s nothing like it comics and probably will never be again. What other writer has a rich enough library of characters that can be merged into one world and actually make sense the way this book does. No there is a reason that “Kill Shakespeare” is already appearing on the top of most graphic novel lists and comes highly recommend at comic shops across the country… it’s that good! The first volume includes the first six issues of the series and is available from IDW Publishing. If you’re someone that only reads series collected in trade paper back or hard cover collections then you've just found your next purchase.