"Kick some bot"
By: Edward Oliveira | Wii-U Reviews | June 11, 2016
Back in the 8 and 16-bit days, Kirby was a bit of a revolutionary platformer, really doing its own thing in a sea of Super Mario clones with its copy abilities, replayability and a unique interface every time. While the original Kirby’s Dream Land was nothing special, Kirby’s Adventure on NES added many of the gameplay elements Kirby still uses today, Kirby’s Super Star added a ton of different ways to play a Kirby game (from a traditional game to a racer with Dedede to Metroid-like adventure game) and Dream Land 2 added the buddies that allowed different gameplay elements. Even after the Super Nintendo, Kirby went on some different and fun adventure with the first great Nintendo DS games Kirby Canvas Curse to the wonderfully beautiful and amazing Kirby’s Epic Yarn. Since then however, Kirby games have been clones of Kirby’s Adventure, perhaps with a gimmick or two, they have only been small and forgettable. That streak continues with Kirby: Planet Robobot since it uses many of the assets and the engine from Kirby Triple Deluxe, it feels more like an expansion of the two-year old 3DS game than a full-fledged sequel. 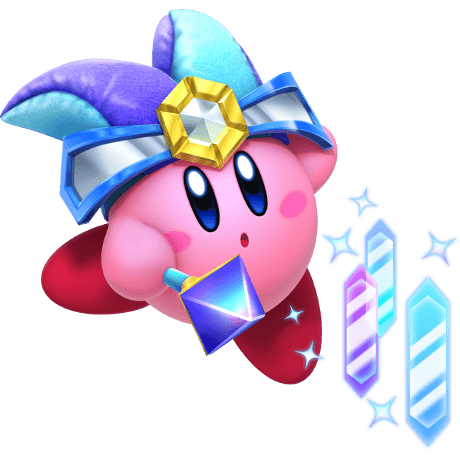 In Kirby: Planet Robobot, mechanized aliens have invaded Kirby’s planet, Popstar, and it seems once again that Kirby is the only one that can save them all. I swear with the useless lifeforms, this planet should have been offed years ago by natural selection with no one but a pink puffball is competent enough to save them. Seriously, would it kill them for a Meta Knight solo game after 25 years? Like many Kirby games, the ability to absorb enemies’ ability (and don some flashy hats as if they’re ripped from Cardcaptor Sakura) returns. While many abilities from past games return, and continue to grow stale, the new abilities really shine and feel pretty fresh. Out of the twenty-seven copy abilities, the best ones are the newer ESP Kirby takes some nods to Earthbound’s Ness and his PSI abilities; Poison, which does residual damage if the attacks or their toxic puddles touch the enemy; and the returning Mirror with its deflection attacks. Triple Deluxe added some new abilities that return in Planet Robobot, and they’re still duds - especially the stupid Circus one. With amiibo, you can gain the Super Smash Bros. Kirby as well, which uses his hammer, cutter and stone attacks straight from Smash as well as costumed versions of Hammer, Sword and Parasol with Dedede, Meta Knight and Waddle Dee respectfully. 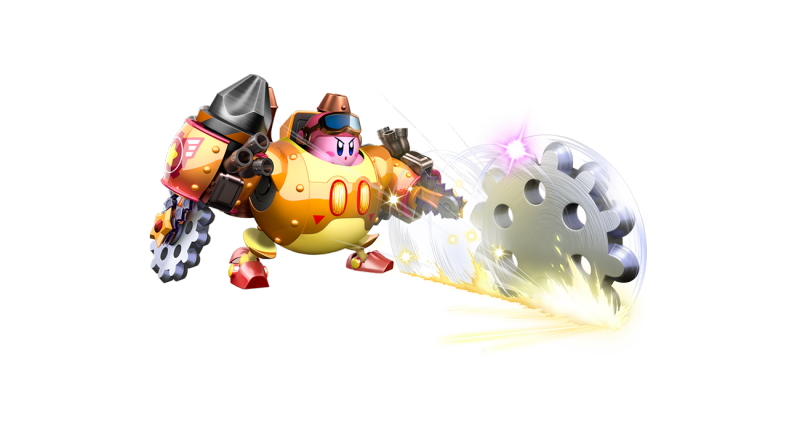 Even though some abilities grow stale, they are reinvented when Kirby uses them in his mech. These new mechs Kirby obtains in Planet Robobot can absorb abilities and obtain an entire new moveset. For example, Stone Mode gives it stone arms allowing Kirby to punch large objects, or the Mike Mode blasts enemies with sound waves. The Jet Modes are always forced, but initiate a fun little shoot-em-up mini-game. The down side is that their moveset is much more limited versus Kirby’s and only thirteen of the twenty-seven copy abilities can be used on the mech. Though Planet Robobot uses the game plain visuals from Triple Deluxe, it also means the 3D is once again brilliantly used. Triple Deluxe is one of the best platformers that use the 3DS’ 3D capabilities, and Planet Robobot one-ups it. Stages are beautifully designed to revolve around the 3D: cars coming to and from the camera, ice cream spattering on screen, obstructions blocking alternative paths and more prove that the 3D can really be a factor in gameplay. Also, the multi-layered stages return, with Kirby bouncing between backgrounds and foregrounds, adding more to the stage design. 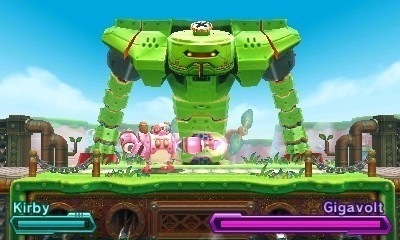 The biggest issue with Planet Robobot is that it relies on so many Kirby tropes. If you’ve played Kirby games in the past, you can figure out this game inside and out in no time, and those who are new can still solve these stages’ toughest puzzles in a second runthrough. See the Wheelie enemy? Must be a ramp filled room (But thanks to the mech, there’s two for Kirby and the mech!). Ice level has fire hazards? Blow some ice on it! The aforementioned ability staleness is carried to the levels’ tricks, and again, the ones using the newer abilities seem the cleverest, even though they’re still not head scratchers. 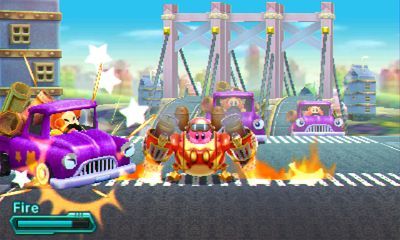 There are other modes in the game, some only unlocking after beating the campaign. Team Kirby Clash allows up to four players cooperate and beat bosses using abilities that level up after fights, something that would have been really cool in the main game! Meta Knightmare Returns is the game played as Meta Knight, but like I said before, I’d prefer a Meta Knight game built from the ground up versus a faster Sword Kirby. The Arena and The True Arena return from past Kirby games in which you take on all the bosses with one life and a finite amount of health items. The strangest one is definitely Kirby 3D Rumble, which has Kirby walk in a 3D stages sucking up and shooting enemies with blocks. It has no place within the grand scheme of things in Planet Robobot, and it also seems the least polished with some rough and slow movement. Kirby: Planet Robobot seems like a placeholder game, just there to fill out a barren time than to actually reinvent the series or even do anything really relevant. The game definitely has its perks, like the 3D, but the overall game just feels like an average experience. It’s one-time gimmick of the mech is neat, but is no where close to an awesome shake up like how Kirby’s Epic Yarn, Super Star or Canvas Curse did. The last few Kirby games have just kinda checked off what a Kirby game needs: Polished and fun, copy abilities, cuteness, welcome to all ages, add a gimmick or two - and called it a day. Again, nothing really bad about Planet Robobot, but nothing really amazing came from it either.
Rating
7.0
Pros