By: Tom | PS4 Reviews | January 21, 2014
Sony Studio Japan’s Knack is a bizarre game. At first glance, it comes across as a platformer flashing back to the glory days of the first Playstation. Surprisingly, however, it consists mostly of combat, and unfortunately the combat is lackluster. Pair that with an uninspired visual aesthetic and pointless narrative, and what is left is a completely typical and boring launch title. Knack himself is an odd mascot. He looks small and cute, but he lacks the jovial attitude and charm that is expected of such an icon, also he has a weirdly deep voice that comes across as uncharacteristic to say the least. He is made up of “relics” which are found in each of the levels. The more relics the player finds, the larger and stronger Knack becomes. It is an interesting concept, but unfortunately it’s only used in specific combat encounters and is immediately stripped away at their conclusion, so you never get to have any fun with the resulting destruction. What’s more fun are the elemental pickups you get occasionally. Throughout the game, Knack will find non-relics to temporally increase his size or offer new abilities and protection. These range from clear crystals for stealth, ice, wood and even fire. These sections, while brief, add a layer of immediacy and spice to the otherwise dull combat encounters.
The game is also brutally difficult. At the start of each level, when Knack is at his smallest, one or two hits will result in a game over. Checkpoints are further apart than expected, and health items are equally rare.  I found myself frequently accepting death after a checkpoint just to get full health. Knack only has a handful of attacks and a directional dodge move that is both slow and short which makes him feel less mobile than he should. His attacks are weak and have a limited range, so you are forced to rush into combat and rush out as fast as possible, but Knack moves so slowly that only frustration is gained through the fighting. 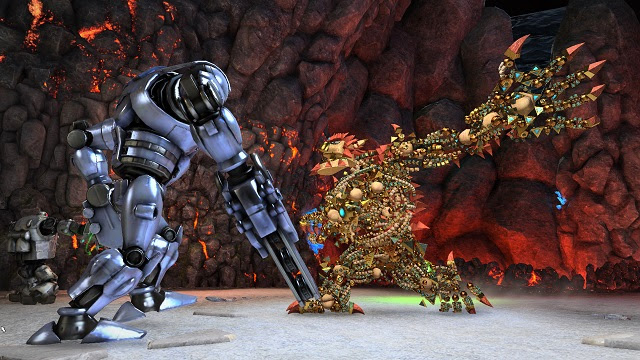 There are treasure chests well hidden throughout the campaign that usually contain a rare collectible item. When the right combination of items are found, an equipable item can be crafted. These take a lot of specific items to create, and by the end of my first playthrough I only unlocked two of the simplest to craft. To compensate, if friends have opened the same chest in their own game, you get the option to pick between your collective drops allowing you better control over what you craft.
Knack’s narrative is as boring and predictable as possible. The game lasts well over ten hours, so it has plenty of time to throw out every cliche in the book, and none of it resonates in any meaningful way.

Visually, the game looks stunning, but it lacks any style. Knack himself is not a well designed character, all the humans look incorrectly proportioned, and the orc enemies are generic. The world consists entirely of bland caves and laboratories, and it looks like a knock-off Dreamworks film. The worst part is, though, that the framerate hitches constantly, and Knack increasing in size makes the problem dramatically worse.
Overall, Knack is thoroughly mediocre. It's combat poses considerable challenge but never feels rewarding or fair. Visually, it clearly takes advantage of the Playstation 4 hardware, but the framerate leaves a lot to be desired. And finally, Knack’s story never gets interesting enough to propel the action forward, and gives the player little reason to keep moving through the lengthy campaign.
Rating
5.0
Pros