Great style, presentation, unique take on a traditional theme, and some solid gameplay – Krater has these things in spades. It’s just too bad then that many of those aspects are short lived. Krater tries to overdose with a 20+ hour campaign but you’ll see almost every variety of each unique aspect of the game in the first waking hours of the title, leaving little to look forward to besides repetition for the remainder of a lengthy group-based post-apocalyptic action RPG.

That is Krater’s fundamental foundation – it’s a group-based action RPG. You control a group of three interchangeable mercenaries who all play a specific role, those roles make-up Krater’s four different classes of Bruiser (Tank), Medicus (Healer), Regulator (Ranged Damage), and Slayer (Melee Damage). Each class has two different skills – like the Medicus’ direct heal and a channeled heal or the Regulator’s area snare and stun shot – and depending on your group composition those two skills will be placed on your 1-6 keys. Krater’s group management handles a bit like an RTS and the functionality of the skills feels mostly like conventional MMOs do with a skill hotbar. The system is fairly straight forward and easy to understand to such a degree that basically anyone who has played a game from the RTS and MMO genres should be able to jump right in and play. 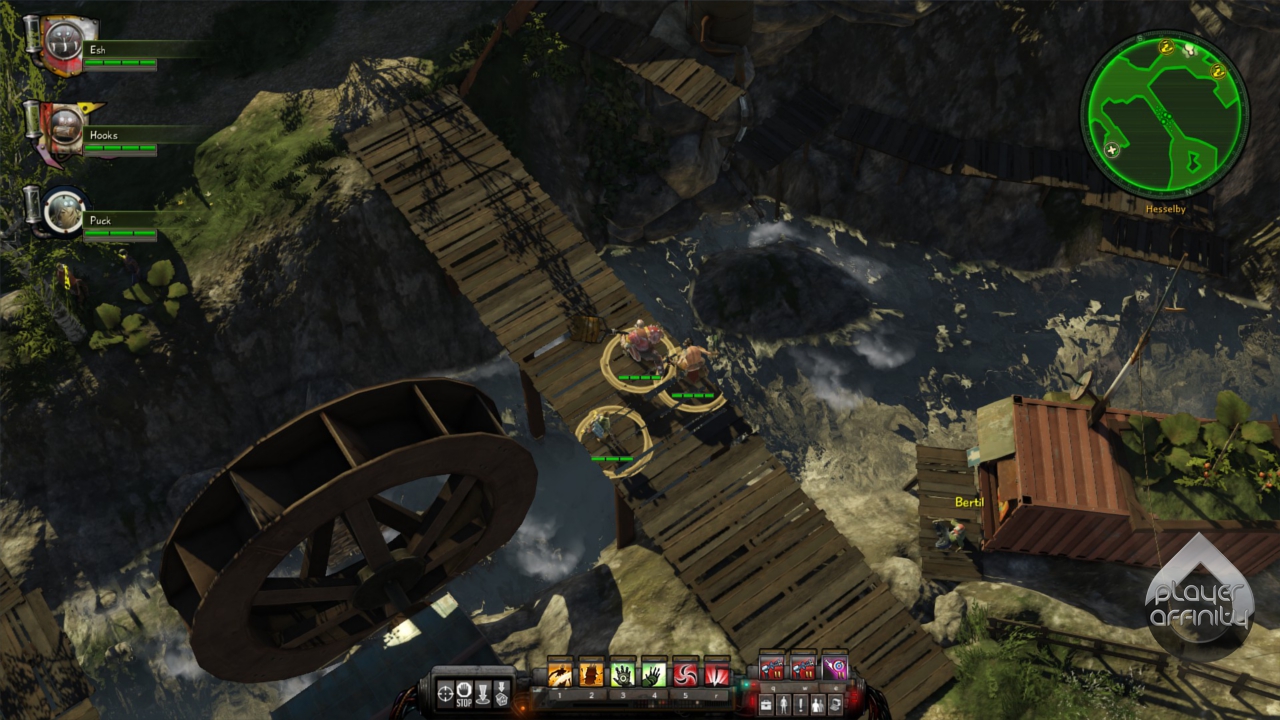 I mean, it is a game; it should be fun, right? Well, it is. Krater’s combat is fun to take part in and play. In fact, the rudimentary aspects of the combat are one of Krater’s strongest features. The animations look great and the looming of permanent death over each of the mercenaries’ head is always a treat while button clicking your way through the game. The problem is that there is no real sense of character progression and a lack of variety in battle situations. The classes that comprise your team will never gain new abilities or skills, and thus the combat never changes. You jump in with your Bruiser to gain agro, do some damage with your Regulator or Slayer, and throw a spot heal here-and-there with your Medicus. This repetitive combat system is only worsened by a complete lack of enemy variety. Enemies don’t really change from start to finish and once you find a sequence of skills that works, the sequence will work on any group of foes you come across.

Due to the restricted amount of skills the classes have, the game is essentially tying its hands behind its back. With only a few different skills in the game the developer is then unable to make differing enemy tactics and battle situations because there can’t be enemies that have mechanics which are unable to be overcome by what the player has at their disposal. Since there is so little at the player’s disposal, there is then very little in way of variety in enemies, character builds, strategies, and so on. You will never at any point think to yourself “okay, I need to go switch out my Slayer for a Regulator because this fight calls for the Regulator’s specific skillset” because the tactics of Krater simply never even get that in-depth. If by some chance you’re continuously losing to an enemy it’s most likely not due to a misstep in your strategy or group composition, it’s more than likely due to the fact that you’re either having trouble raising the funds to upgrade your crew to the next tier level or you are not up to date with the latest implants and boosters. 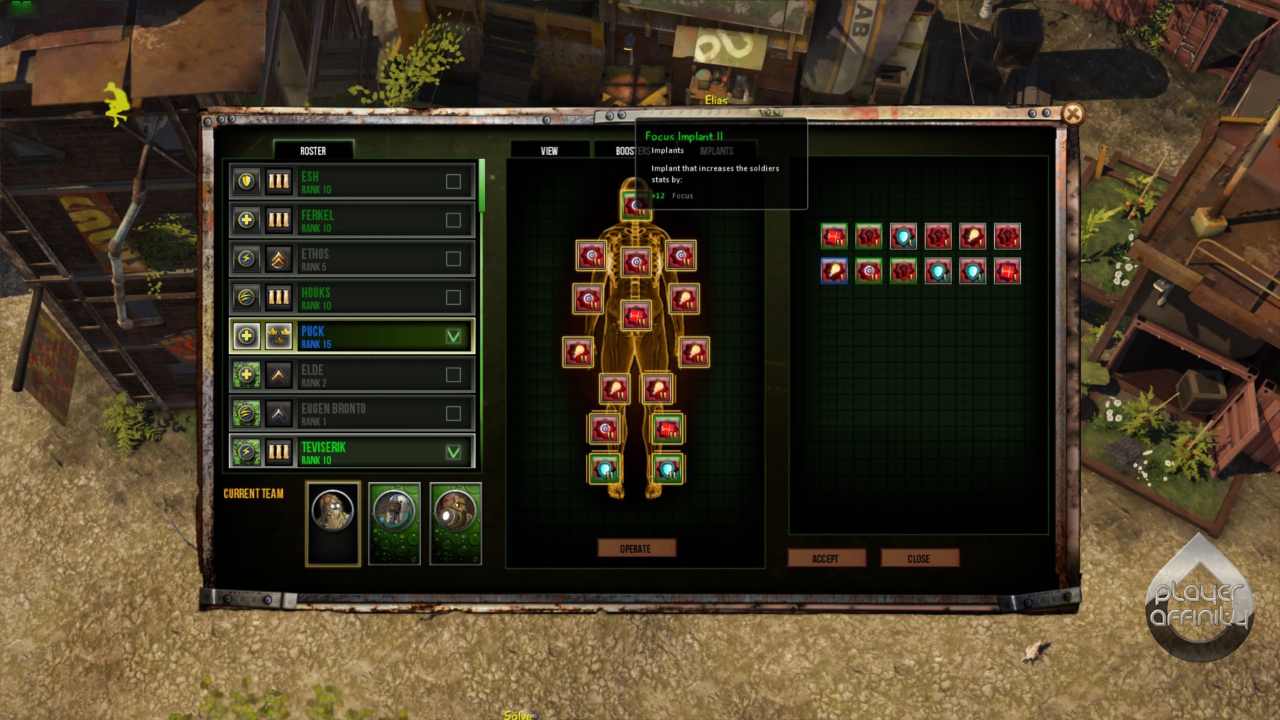 Keeping pace with the latest implants and boosters is very important because when your characters level-up they will not gain talent points, stat points, or anything of the sort. Instead, each increased level will unlock a new slot for a booster or an implant. Implant slots allow you to focus on the stats you want for your characters – like stamina and defense for the Bruiser or intellect and focus for the Medicus.  Boosters, on the other hand, are applied to skills to either increase the skill’s potency or to add beneficial effects, but boosters don’t change the utility of a skill, they just make numbers go up by increasing damage or a status effect. You can buy implants, boosters, and basically all other items at one of the many different vendors, but the real trick is to get the blueprints so you can craft them at a work bench yourself.

Crafting is one of the game’s strong suits because it allows you to put together any item in the game. This means that with the right raw components you can craft the game’s four different item types, which is boosters, implants, weapons, and gadgets. Crafting some weapons can have variables in stat outcomes and possible random attributes, which makes crafting the various color-coated weapons a treat, even if it is the only gear slot on your characters. The other item-slot on your character is not for a piece of gear, but for a gadget. Gadgets have a variety of different functions from tossing a shrapnel or toxic grenade to a temporary stat boost or healing injector, but after the gadget is triggered, they go on a two minute cooldown timer. Gadgets have a range of applications and add some much needed versatility to the characters. 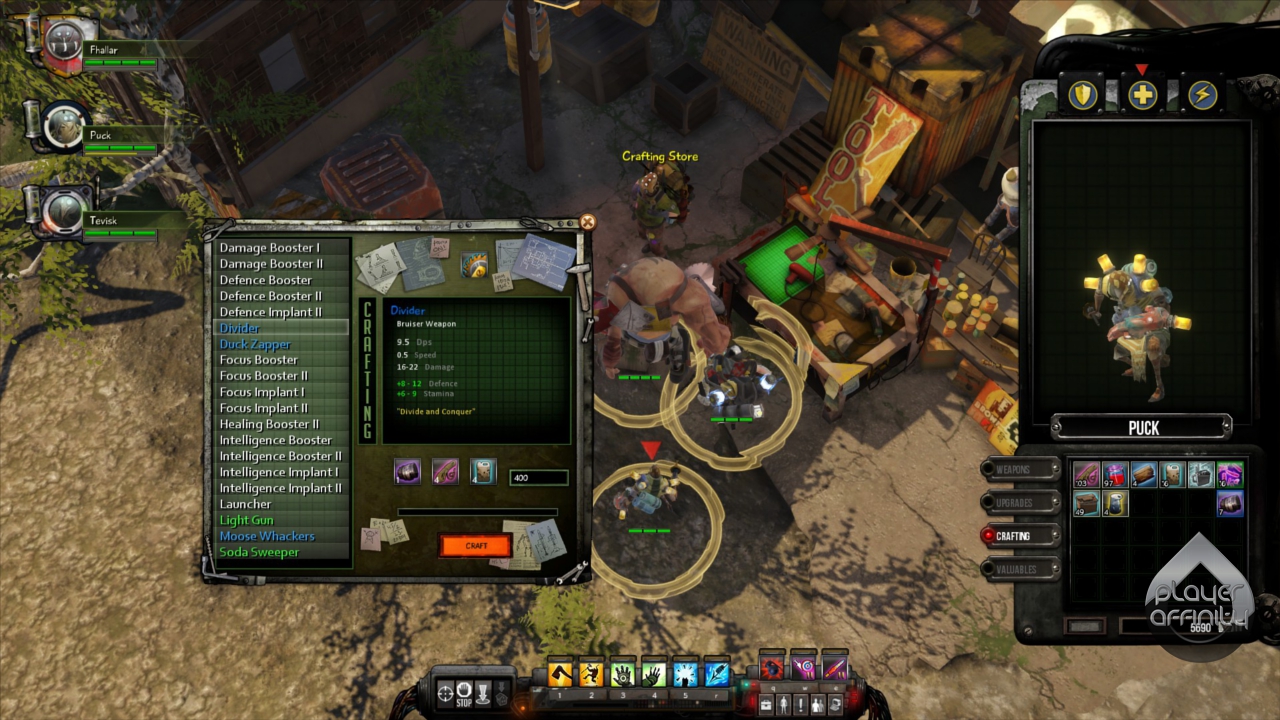 All of these spars customization options and combat mechanics are held together by a throw away story that’s backed up by an interesting take on the post-apocalyptic genre. The entire tale is unraveled in a huge crater where a nuclear explosion had decimated the landscape an era before your adventures there. The current inhabitants can vaguely remember tales of a land that was once known as Sweden and the only remaining connection to the world that once existed is found throughout a network of underground industrial ruins. The surface is covered with wildlife and forests, if it weren’t for the regression in technology and all the gasmasks that everyone wears you wouldn’t even know it was supposed to be a post-apocalyptic world.

The Krater universe has some undeniable charm and way about itself, it’s friendlier and more inviting than one might think a hostile survival of the fittest-type of a world might be, but the charm wears off quickly. The characters you’ll meet along the way don’t have interesting stories to tell or to through you into, all of the quests feel like game-filler and are unremarkable fetch quests. The tedium of the missions your band is sent to complete is very unexciting and made worse by the unchanging combat. Missions might tell you to go into a cellar to kill some rats, obtain meat from boars, escort someone somewhere, and many other of the worst types of quests that are found as game-filler in MMOs.  The main storyline is not the exception to this monotony, each section of the story will lead from one link in a very boring chain quest to the next. 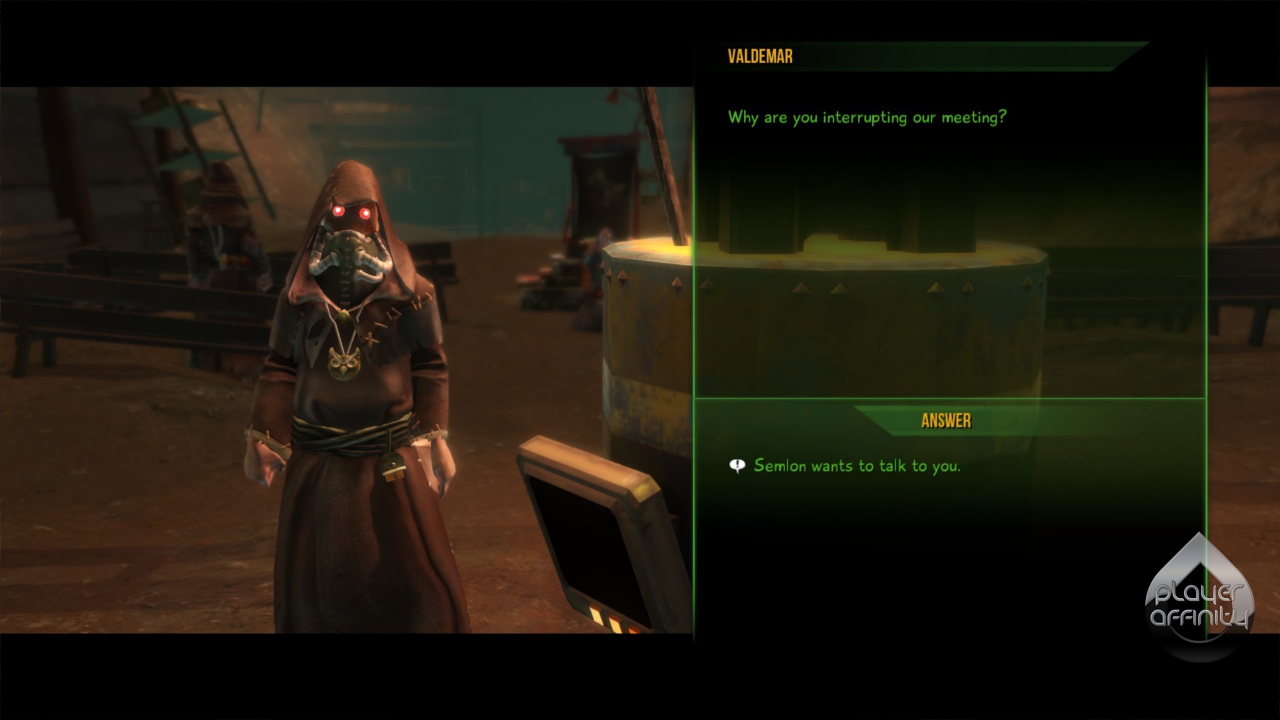 The gadgets, weapons, implants, booster, and a somewhat interesting take on a post-apocalyptic world try to make Krater a compelling adventure, but the repetitive gameplay shaped by unfulfilling busy work is only worsened by a paper-thin story that feels like a string of side-quests. There are some spars moments of brilliance in Krater, but they’re too few and far between.  In the end, this crater in Sweden is a post-apocalyptic hole in the ground that’s filled with quirky inhabitants and some uncharacteristically green environments, but after you get past the pretty exterior you’ll come to find that this Krater just isn’t that deep at all.