L.A. Noire is an incredibly ambitious hybrid of Rockstar's typical violent, open world action games and the kind of investigative puzzle adventures that rarely get budgets that approach this level. It's an interesting experiment and for the most part a very entertaining experience, though it does have a few issues that prevent it from being counted among the best of both genres.

You start the game as Cole Phelps, a patrol cop with the voice and likeness of Aaron Staton, who AMC fans will recognize as Ken Cosgrove from Mad Men. His is but one of dozens of faces that the developers used new technology to capture the details and movements of, which when integrated with the animation systems in place with the engine creates startlingly realistic looking heads for the many featured characters of the story. If you pay attention to the difference in the fidelity of detail and movement between peoples' faces and their bodies the believability breaks down a bit and you start to cross into uncanny valley territory, but focusing on the faces alone allows the technology to take over and produce conversations so real looking that you might forget for a second that you're not watching video. The practical use of this technology is to give players another way to tell if a suspect is lying to them or not, but the effect goes beyond the gameplay gimmick a bit and helps sell a classic film noir story that is far from perfect but gets a lot right. This game is just a first step, and I can't imagine it will be too long before it's standard for most AAA games to use this kind of tech on their characters. 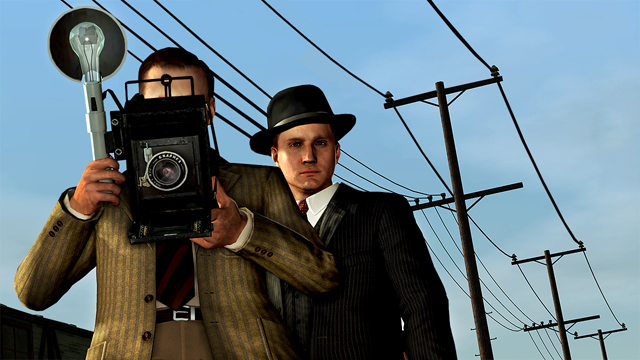 So anyway, Cole is a former soldier from World War II, who has returned from the Pacific to continue the good fight in the city of Los Angeles. A few tutorial cases introduce you to the various gameplay systems the game revolves around, and before long you're promoted to a detective in the traffic department and set loose in the world. The game follows a very linear structure, where you are given a case and must complete it before moving on the next one, and completing all the cases in a department progresses the story and unlocks the next "desk", including obvious ones like homicide and vice. When you're on a case, there's a limited number of things you can ever do. You will have somewhere between one and three locations to visit, and at these locations you will perform some combination of looking for clues, interrogating suspects or witnesses, or getting into some sort of action sequence. These sequences can be fights, either with fists or guns; or chases, on foot or in cars. Performing all the tasks at a location with unlock a new one, or advance the narrative of the case, or prompt you to tail someone, or give you an opportunity to interrogate and ultimately charge one or more suspects. There are a few opportunities to ignore a case for a while, as you can look for certain hidden items or respond to street crimes that have you participate in one of the previously mentioned action sequences. From the main menu you can jump into a free roam version of any of the desks, where you can check out the optional content without the pressures of being on a story case.

Laid out all like this, the general flow of the gameplay sounds pretty simple, and for the most part it is. The fun is in the execution, which when firing on all cylinders can be pretty damn good. When questioning someone, you can either believe their statements, pressure them if you think they're withholding, or present evidence you've collected to prove them wrong. Usually when someone's lying it's easy to tell early on, with the facial animation that's in place, but as the game continues the tells get less obvious and you have to rely more on what you already know about a case and maybe apply a little metalogic to the situation. The system isn't perfect, because sometimes evidence that is completely relevant to a discussion won't count simply because it doesn't directly dispute the person's exact statement, and it's hard to know whether a statement that's true on its face should actually be considered a lie based on whatever the game wants you to get from a conversation. It's a system that's inherently limited by the writing and how well you can guess the creators' intentions, though at least the feedback is quick to let you know whether you're on the right track, and the beauty of the game is that a botched conversation doesn't mean the case is ruined.

Because the thing is, every case will end up completed, whether you got the right guy or not. Sure, if you mess things up you'll get a bad ranking on the case, but the story continues anyway and you can try it again later if you want. The story is pretty flexible, and while there are issues where you can make one decision and subsequent dialogue will act as though you made a different one, in general it's very much a script that bends but doesn't break. The only thing that stops the game cold is failing an action sequence, and those can be skipped if you mess them up enough times. I kind of wish there were opportunities to see how a case might go differently if you are spotted tailing someone or get knocked out in a brawl (especially since a later case forces you to get beaten and stuffed in a trunk), but there are only so many contingencies the designers can plan for, and I think they did a good job covering a lot of them. You can find evidence that will lead you to the same place in multiple locations, and failing to learn something from a witness can be overcome with the right break later on.

If there's one big issue I had with the detective work in the game, it's the disconnect between the expectations on a case-by-case level and the thrust of the overall story. I think if the game was either all about investigating one big case (or a few pretty big ones) or pretty much a string of stand-alone investigations strung together by the development of the character, it would have worked better. As it is, two of the desks feature story arcs that tie everything that happens in them together, yet still expect you treat each investigation as separate, and still reward or penalize you based on the results regardless of the fact that they're made irrelevant by the machinations of the plot. Knowing that actually getting it "right" as far as the game is concerned has nothing to do with the final result makes it sort of seem like wasted effort, even if the cases themselves were interesting while you were playing them. Those sequences of cases might have worked better as their own thing, maybe as a chunk of DLC somewhere down the road, to keep the events with the main storyline from seeming repetitive, and to prevent distraction from the other stuff it was doing. The game already has an awesome foundation for future content with the ability to insert individual cases and a few of them already playable (on 360, anyway), and I hope they capitalize on it down the road.

Another point worth debating is the fact that the game takes place within an open world. On one hand, the game doesn't do a whole lot with this feature, unlike previous Rockstar games that have packed their environments with secrets and side missions. The game has some cars you can find and the street crimes, but that's about it. Otherwise it's basically just a bit city that you can waste time driving in, and that's about it. With the fact that the game lets you skip all the driving between locations during cases makes the existence of the open world seem even more pointless. But to be honest, the way the game realizes 1940s Los Angeles is one of my favorite aspects, and I'd hate to see it go away. The game uses some really great lighting and other effects to bring its environment to life, and it's one of the busiest open worlds I've seen, despite the lack of ability to wreak havoc in it. The lack of real activity is unfortunate, but I think it's pleasant just to drive around and see the different places there are, and with the ability to skip it there, I don't see much reason for anyone who's uninterested to complain about it. The action is sort of similar - there's nothing particularly original or captivating about the game's gun fights and car chases, but they're easily skipped if you're bad at them, and they do a good of job of pulling you into the cinematic world the game takes place in as much as they're fun on their own.

As an open world action game L.A. Noire feels very limited, but those elements do a good job of enhancing what I think is a very accessible and interesting adventure. Puzzling out a conspiracy or recreating a crime is never terribly difficult, but the game does a good job of making it feel rewarding, whether the logic the case is designed to actually holds up or not. I wish it were a bit more consistent in the things that work and the things that don't, but taken as an experience, L.A. Noire packages some cool concepts and exciting technology into a unique love letter to a genre of storytelling that has fallen by the wayside in the sixty years since it was first popular, but is still capable of some pretty entertaining moments. L.A. Noire is a game that not everyone will enjoy, but if you're willing to accept its contrivances and eccentricities, you might find something interesting.