Two-time loser and petty thief, racked with the death of his only friend Brian; Alec contemplates suicide in an abandoned warehouse along the pier in Philadelphia. He reflects in his loss as tears run down his face and a pistol tightens in his hand. As his thoughts race back to yesterday, he puts the gun under his chin and pulls the trigger.

Yesterday, after running the gambit of small-time hustling to get some money for food (hot dogs), he meets up with Brian on the Philadelphia pier where he lives. Alec finds his friend fresh off an ass beating that he received from his fixer for skimming off the top. So to make things right, Brian tells Alec that they have to kill a local politician by the name of Callahan. Alec is against the idea but Brian tells him that he’s backed into a corner and he has no choice. As a further guilt trip to Alec, Brian reminds him that he has shot a man before. Reluctantly, Alec agrees to help his friend out. 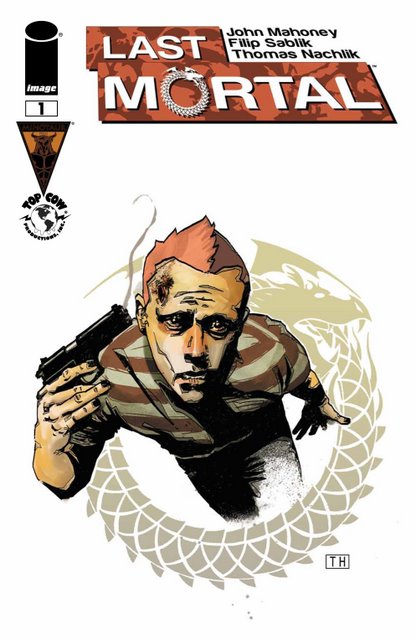 The two men meet later to put the plan in effect; they plan to act as window washers and perch outside of politician Callahan’s window. Now outside of the window the pair spies Callahan and his bodyguards. Alec becomes nervous and begins to freak out. Before he can say anything, Brian begins shooting up the entire office with his handgun. Instantly the bodyguards return fire and Alec hits the release on the window washing scaffolding, sending it plummeting towards the ground. Alec reacts and stops it just in time to have it throw a wounded Brian to the ground. The two friends attempt to run, but Brain doesn’t make it very far before he is gunned down. This gives Alec the chance to escape the bodyguards and head back to the pier to hide. Now in the warehouse Alec opens his eyes to be greeted by his own brain matter and blood decorating the walls. He looks around and finds the slug that passed through his head lying on the floor. Then the cold hard truth sets in: Alec King may be immortal.

The first thing that makes this book stand out is the art of Thomas Nachlik. It’s so good it damn near steals the show with its gritty, almost noir look and feel. The entire book is in black and white and it works immensely. It truly would be hard to picture it any other way. John Mahoney (Last Mortal) and Flip Sablik's (Asset, Last Mortal) story of a suicidal immortal is interesting, but with only running as a four issue mini it’s too soon to say if the reader is really going to give a crap about Alec. What’s going to be his driving force? He’s kind of a shiftless, dopehead, lowlife with no motivation that loves Keats and has crappy music for a ringtone.

His only friend Brian, who seemed to be the “brains” of the operation is already dead. This is kind of a blessing in disguise because their dialogue was a little hard to read. So there’s a good chance for some flashbacks or a ghost Brian. But if Brian was the brains, why did they bring a pistol to shoot through glass on a high-rise building? Half the rounds are used to shatter the glass and Alec has on a revolver; just because he’s shot someone before doesn’t mean he’s a head-shot master and can do it in six. Must have been the drugs or the hot dogs talking, huh Brian? But that doesn’t explain how the bodyguards got to the street so fast, and do they have a license to kill? Brian was already half dead and these guys execute him in the streets.  For a guy that wants to clean up the streets, Callahan sure does use some hard street justice.

There’s a lot of potential in Last Mortal and it’s what you call a book with a “high concept” idea. But the trick with a high concept is that it’s what you do with the entire story that encompasses the idea. That is what really matters. It's almost like a tightrope act – if the idea leans too far to one side, it could fall straight to its death.