Layman Vs Kirkman and Zombie Neil

Not so long ago in a undisclosed super secret location somewhere in puerto Rico Mr. Neil Rodriguez and me Mr. J.Blas, sat down in a super secret Player Affinity, think tank to talk some shop talk about two popular Image titles: Robert Kirkman's The Walking Dead and John Layman's Chew. This is the transcript of their meeting.

Neil: Robert kirkman has done some fantastic work for image, Invincible and Walking Dead are pretty much "The" Image go to books. Heck... Kirkman gave new life to the whole company by bringing back great writing to a publisher that focused solely on art. Kirkman's contribution to Image has been so big, that he was made one of the partners or "new founder" of Image comics. His style of writing brought back a sence of anything goes that keep readers hungry for more. Kirkman's Walking Dead alone has proven to be a smash hit, not only in comics but in TV as well. Kirkman, has become the Stan Lee of Image comics.

As Neil finished talking, a loud noise was heard near our quarters. This made Neil a bit jumpy. 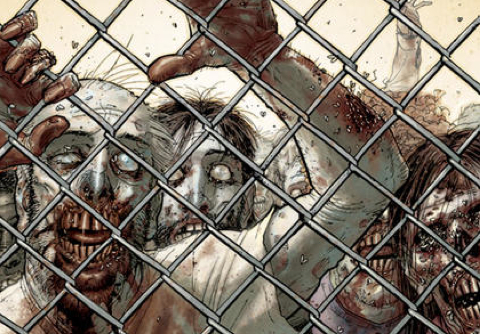 Blas: But what about John Layman? Chew, is one of the top image books out there. His originality has proven to be something of a landmark in such a small period and he was virtually and unknown before this book got out. Hell... His book is in the works to be made a TV show too. All his accomplishment are done in only the first year the book came out. Sure, he is not a partner and only has Chew as a major credit under his belt but his originality has almost put him as a name destine to comic superstardom.

Neil: Gosh... JB he only has one book and after the first year the book feels like a gimmick or a concept, that keeps repeating month after month. Holy baloney, JB! The tone of the book is so cynical sometimes it can be too much to handle. Heck(laughs a bit weird) is like the whole book is based on the main character eating poo poo.

The noise was heard again, this time it was ten times louder. Blas produces a gun from his pocket.

Neil: Is that a gun?

Blas: Yes! We're in a top secret place Neil of course I'll bring a gun! Anyway its mostly nothing, I bet its just some animal hanging around. But don't you think Chew has major points for doing a comic about something out of the norm? Kirkman is great an' all but Invincible is just Spider-Man in Superman's place, Walking Dead is just another zombie story like any other zombie story around nothing original just the same stuff recycled in a new fresh modern spin. Besides Kirkman's exposition is sooooo long he could easily write a novel on just explaining or exposing the exposition and still we couldn't get to the next chapter--

Neil: Layman's dialog tends to be a bit technical and his suporting characters don't go anywhere, they are just there to fill a page--

Neil: oh yeah? Well Layman's tries to be too serious for a book that should be funny and he's only done one book.

Blas: Kirkman has done lots more but has only worked well with those two books and perhaps Marvel Zombies but then again he is just repeating the same book "Walking Dead" with a different setting.

Neil: Look JB lets not fight over this... they are both good but we all know Kirkman takes Layman any day of the week-- 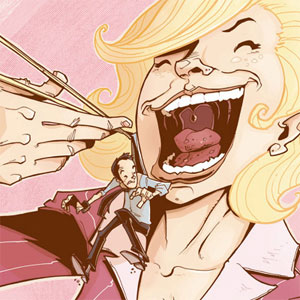 Blas: Oh Neil, you ignorant fool! The game is to be original and unique in a world full of clones.

At that point a zombie smashed the door and entered the room. It grabs Neil by the shirt and tries to eat him. Blas shots the zombie, ripping his head off clean.

Neil: Ahh! Ahhh (girlie screaming) I think it bit me.

Blas shoots Neil in the leg.

Neil: What'd you do that for?

Blas: You're going to turn into a zombie, Neil.

Neil shows Blas that he has no bite marks, but Blas shoots Neil again. 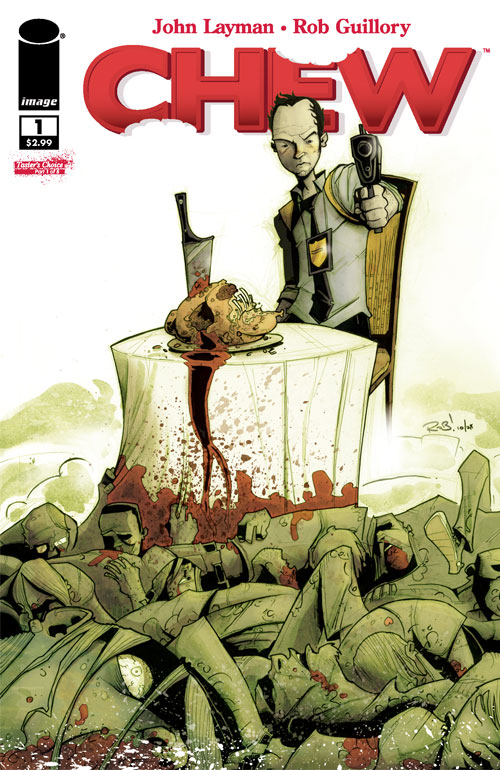 Neil: what was that for? I told you I wasn't bitten!

Neil: Arrrgg right in the bojangles!!!!!

Blas: I'm sorry Neil but we have to finish this arguement.

Blas: No, Neil is dead and as we all know Chew, is the winner... no pun intended.