By: Jim Bush | Comic Reviews | July 6, 2014
The creative team behind Lazarus has been building the current storyline slowly, as issue #9 is part five of the arc. While the pace building up in the series lately has at times been a little slower than would be ideal, the conclusion of the arc in Lazarus #9 is well handled. Greg Rucka and Michael Lark bring together two separate story threads that have seemed unrelated and make them fit together logically. 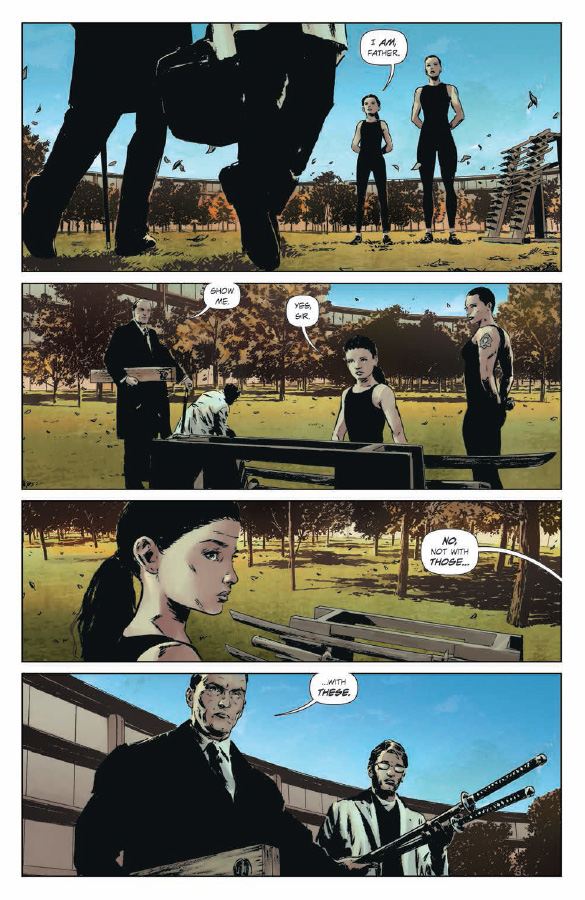 After their home and livelihood were destroyed by natural disaster, Joe and Bobbie Barret take their two kids and their neighbor’s daughter Casey to “The Lift,” an event where worthy members of the Waste class are employed by the Carlyle family, lifting them out of poverty and helplessness. Along the way, the Barrets’ daughter, Leigh, was killed, as they’ve had to navigate through treacherous territory to get to the lift. Once there, Michael Barret does very well on the tests while Casey, who also done well, was eliminated from consideration because she has a small chance of developing cancer. It seems The Lift criteria are very thorough.   However, Casey happens to see someone she knew from her old camp, a man named Angel, who has become a revolutionary and is attempting to bomb The Lift. Forever Carlyle, the main character of Lazarus, is searching for Angel and knows he has a bomb, but he has found a way to circumvent the Carlyle’s recognition software. Angel stabs Casey in the stomach to prevent her from revealing his secret (which she seemed unlikely to do), but this seems like a bad move because just as Angel is about to detonate himself in front of Forever, Casey returns the favor, stabbing Angel in the back (literally). This heroism gets her accepted to the Carlyle clan, just like Michael. 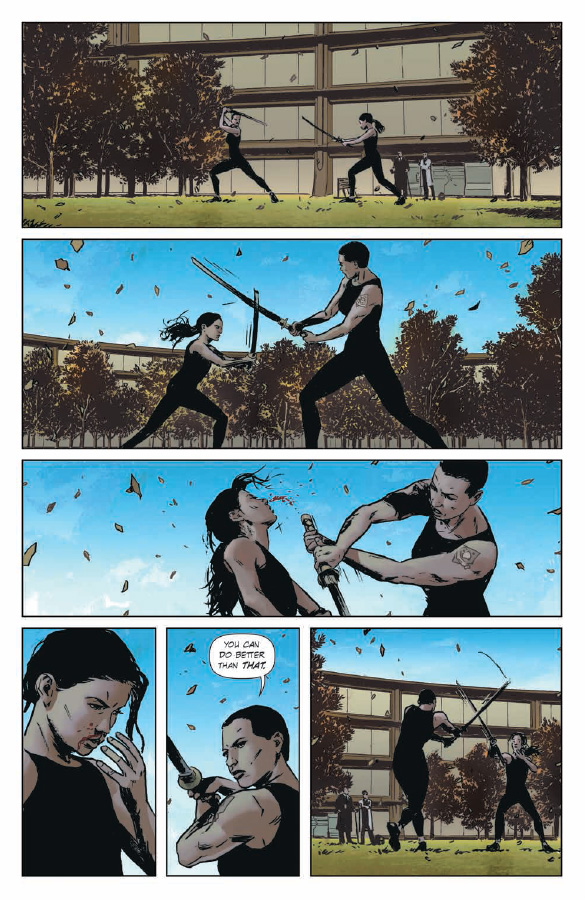 The suspense of this issue works pretty well because there is a lot happening. Although it may seem very convenient for Casey to personally know Angel, and then happen to see him, those are coincidences that I don’t think are too extreme to hamper the story. Rucka and Lark have been telling a politically-charged story since the first issue of Lazarus, and they’ve created a complex world. It’s telling that part of me wanted to see Angel succeed, since in many ways he is right about the power dynamics of this world. When he coldly stabs a former friend, we see that he is not saint martyr either, just another person who will do anything to get his way.   Michael Lark’s art is once again very sharp, especially in an opening flashback sequence where we see young Forever, having been trained, able to defeat her teacher, though also showing mercy and some elements of independence. Lark chooses to set this swordfight outside in the autumn, and as Forever and her teacher, Marisol, engage in a graceful yet vicious battle, leaves are falling all around them. The mostly wordless sequence is a combination of violence and beauty that both aligns and contrasts with the ugly and technological present-day world of The Lift. 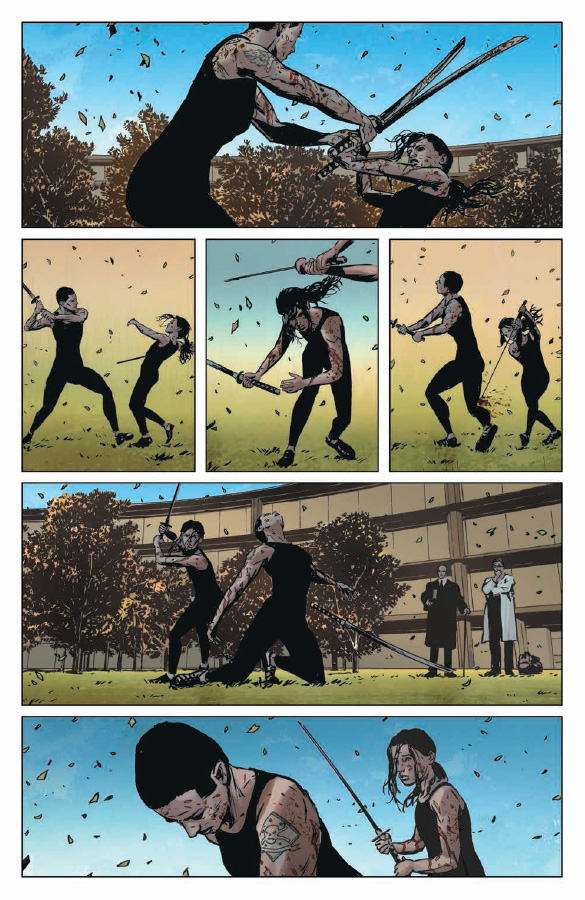 I would still like to see more out of the Barret parents, and since Michael and Casey are now going to be a part of the Carlyle world, we will hopefully see it. I think having all of these characters in one setting is a good move for the future, as their sometimes disparate storylines have not always gelled in previous issues. Still, Lazarus #9 is a satisfying conclusion to The Lift storyline, allowing the series to return more fully to the dynamics of the Carlyle family that we saw during the first arc.
Rating
7.8
Pros