The Legend of Zelda: A Link Between Worlds Review: A Fresh Restart

By: Edward Oliveira | Wii-U Reviews | December 12, 2013
It can be tough making a sequel to a twenty-year old game. A generation of gamers has been born and raised, and you must relay the fact that not only did the game existed before even they ever did, but that it is worth your attention amid all the newer tech that surrounds them. If that wasn’t enough, you have to regain attention to those who have played the original and persuade them that a new installment of an old classic is here for them to play.
But not every game is The Legend of Zelda: A Link to the Past. Touted as one of the best games of not just the 16-bit era, but of all time, Link to the Past amazed gamers of all ages with its story, dungeons, and in-depth overworld. It took what made the original Legend of Zelda so great and absolutely turned it on its head to take advantage of the Super Nintendo’s hardware. This game alongside other SNES greats like Super Metroid and Donkey Kong Country helped solidify Nintendo as the victor of the vicious 16-bit wars, and created examples on how a classic is born in this then-young medium of video games.
However, The Legend of Zelda: A Link Between Worlds doesn’t just take advantage of the nostalgia of a two-decade old game. Ironically, this sequel takes the classic 2D Zelda formula and adds to it more modernizations to it than any 3D Zelda since Ocarina of Time. 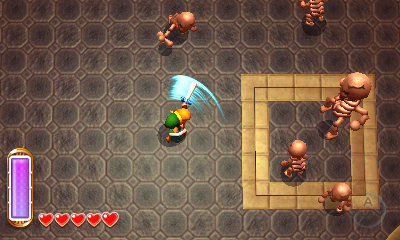 Unlike many Zeldas, A Link Between Worlds doesn’t game start off with a long origin story with your friend-zoned gal pal or your sad grandma, setting some sort of tone. Instead the events happen quickly and you’re actually sprawling through a small dungeon in no time. All that Link was supposed to do was to deliver a sword, but what he gets into sets the fate of not only Princess Zelda’s legendary land of Hyrule but also the dark kingdom of Lorule with its very own Princess Hilda. It all wraps up in an ending that can only be called a “Zelda moment,” a memory that Zelda fans will mention for years to come.
Compared to the detail in Twilight Princess, the cel-shading in Wind Waker or the watercolor in Skyward Sword, A Link Between Worlds looks a bit boring. While it is neat to see the overworld of A Link to the Past, those who get settled with the surroundings or don’t have that feeling of nostalgia will think the game is pretty low production. While it runs in a silky smooth 60 frames per second, nothing in the world itself has any pop to it like first seeing Ocarina’s Death Mountain from afar, Minish Cap’s ground when first being tiny or Wind Waker’s Tower of the Gods, just some simple-textured environments in normal greens, yellows, browns and blues. Dungeons are a bit spruced up with some nice mapping for carpet, stone, water and various visual effects. The visuals, as well as gameplay, are more appreciated when in 3D because of its focus of verticality, and those who don’t use the 3D or have a 2DS will not appreciate the subtle details that went into the 3D. And even though I think Link looks super-plain in this game (which is I guess is the idea), I really love the looks of other characters like the witch Irene, Lorule’s Princess Hilda or the super-overly adorable Zelda. 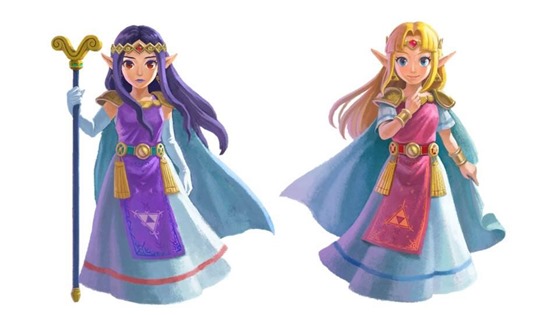 Though Link looks plain in his normal 3D self, he actually looks much detailed in its painting form - a new power that transforms the hero into a 2D drawing on the walls of Hyrule and Lorule. This new ability is a focal point to finding goodies, scaling dungeons, and solving puzzles. It breaks the convention of the designers’ point of view because simple things in normal world building like walls and windows now have to be placed with the upmost consideration, and you as a player must now consider them as a solution.
Aside from the painting form, Link’s traditional arsenal of a bow, hammer, and hookshot are back, but not in the traditional fashion. First of all, you no longer have to worry about ammo on everything, because your usage of these items are dictated by an energy bar that drains with every arrow slung, every second as a painting or every swing of the hammer. Secondly, you must now rent out these items for price, and you get unlimited use until you die. However, you later can gain permanent ownership and you can upgrade these items to do more things like launching more arrows per shot. It is a great inclusion in the Zelda franchise, and something that makes these items into something more than the tool you need to complete the current dungeon. 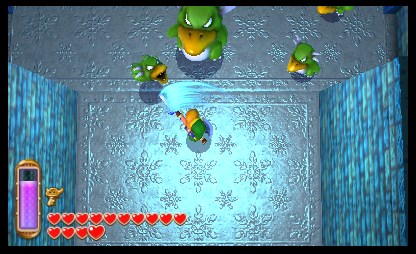 These tools and powers help warps the player’s mind with the game’s various dungeons. Unlike any Zelda before it, you can partake the main quest in any order you like once the first few small dungeons have been tackled. This nonlinear design allows players to explore and tackle whatever they run into, whether it is finding the next dungeon, a new portal to Lorule/Hyrule or one of the dozens of hideaway areas filled with various puzzles and treasures. Not since the original Legend of Zelda have we had this sort of freedom, but it is even better because all the tools are available from the start as long as you have the coin.
The dungeons in Link Between Worlds have some of the best puzzle layouts in the series’ history, and that’s because it allows players to get a little stumped. After years of side characters like Midna, Navi, Fi, or even Zelda herself, it is refreshing to see that Link is all on his own in this adventure, and so are you. No easy-to-read linear dungeon layouts or simplistic puzzles like in the recent 3D Zelda titles, A Link Between Worlds is not only classic, but also brain-teasing. Even better is that some dungeons don’t need any tools - just you, a sword, and your new painting power. 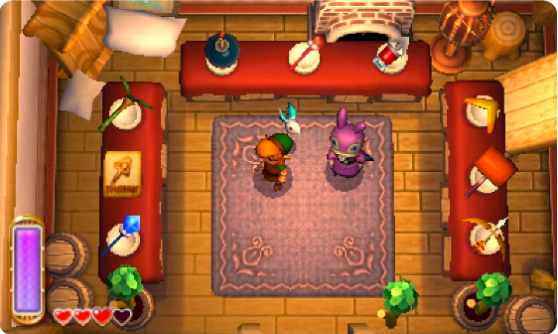 I’m super excited on what the Zelda team have up their sleeves for their next game on Wii U because A Link Between Worlds proves that they finally realized that the Zelda formula they have been using for fifteen years should not be emulated again. The sheer amount of fresh ideas in this classic looking game actually took me by surprise. Granted it’s production could be a bit better, but it's gameplay is just excellent with amazing dungeons and a renewed sense of freedom. It is a great first step Nintendo, let’s see Zelda regain that revolutionary standard again.
Rating
9.3
Pros