"A new look of an overlooked Zelda"
By: Edward Oliveira | Wii-U Reviews | February 25, 2015
I never thought of this back when The Legend of Zelda: Majora’s Mask came out in 2000, but this sequel to the medium-defying game that is Ocarina of Time was very, VERY ballsy. Take this game where every element, from controls to game mechanics to production value and everything in between, was done so right on the first try, when games didn’t have examples to take from; and then make a sequel like Majora’s Mask. 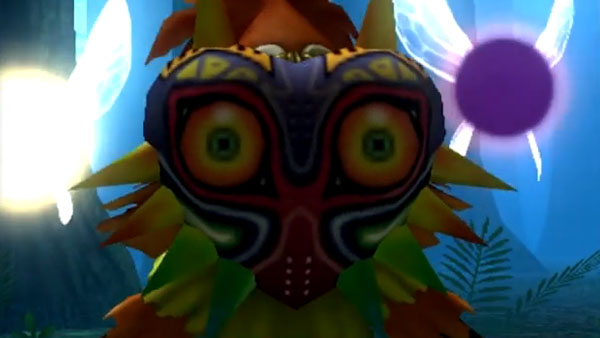 A game where it’s much smaller in scale with a time limit and the ability to revert back to the beginning, undoing all the good you provided to many. Traveling a land full of familiar faces where masks are the source of many solutions and powers, and a menacing moon staring down at you until it lands, eradicating everything in its path. To play a game that concludes by slaying Ganondorf around a ring of flames to prevent a dark future full of destruction, to then live the younger Link’s destiny to leave the legendary Hyrule to find his friend Navi only to be sidetracked in this weird world of Termina. A game where Zelda’s name is in the title, yet nowhere to be found.
Yeah, Majora’s Mask is ballsy by not continuing the badassery and wonderment of Ocarina of Time to something that’s a bit bizarre, a bit gimmicky, and yet so very charming and innovative in its own self. To deliver a classic that can’t be placed in the shadow of Ocarina, because its theme and tone can’t relate to Ocarina despite starring the same Link.
Out of all the Zelda games out there, there is no other like Majora’s Mask. And after seeing remakes of Ocarina and Wind Waker, there is no better Zelda to remake, no reevaluate, than Majora’s Mask. 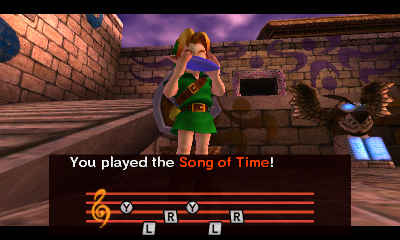 One of my favorite Zeldas because I love when a game decides to throw a curveball in the ideology of how a game series perceives itself, Majora did have issues. These issues mainly stemmed from people dropping it due to confusing side quests, weird structure and an adventure that shown itself too different for their tastes. While the latter issue is more an opinion of how games should handle sequels, especially after one like Ocarina, the others could be fixed with some time, which ironically wasn’t on the original game’s side due to a short development cycle. Luckily Majora’s Mask 3D was in development for three times longer than the original’s, so many of the other issues were fixed.
For a game based on five main areas littered with side quests once the area was conquered, the side quests were never really handled right. Thrown into a book called the Bomber’s Notebook, this incredibly useful item buried into the menus. This prevented people from understanding that during the 72 hours, there were specific events happening throughout Termina where Link must step-by-step resolve those events so that he can either grab a mask he needed for later, snag a heart piece or get an item that might help other events. Now with the 3DS version, the notebook automatically tells you when an entry is logged and is detailed on the bottom screen. The best part of this is that Nintendo didn’t dumb down the game by telling you what’s next, they only enhanced it to exclusively mention what you did in much more detail, so that you aren’t as lost. This makes it perfect to not only newcomers, but also those who lost their interest.

Another big issue was saving the game, where the only true save was when you resetted back to the Dawn of the First Day. Other than that, there were owl statues that only served for a single save state and would delete as soon as it loaded. As a kick of modernity and a perk for a remake on a system that contains many functions (and an ability to turn off from a dead battery), the statues are now normal save points. So checking your StreetPasses or forgetting to charge it won’t cost you progress.
The last issue people had was the Song of Double Time. This handy melody allowed you to skip over to the next sunset or sunrise, but now you have the ability to fast forward to the precise hour you want, so doing a quest won’t drag due to waiting out the clock doing little to nothing.
While that’s great to new and frustrated players, hardened vets to the Nintendo 64 can also get some use out of the remake. Some items have been relocated and there are two new fishing areas that Link (and his transformable selves) can partake in. The fishing controls the same as Ocarina’s but the fish themselves range more than just simple bass, and the tactics to grab them vary depending on the mask you’re wearing – both transformable and not. Lastly, the bosses have been slightly reamped with an eye bulging from each of their bodies. While that’s kind of an improvement, using Gohma-like eyes as a gigantic “Stab This” sign is a bit insulting to Zelda fans that just traversed a puzzle-ridden dungeon to get there. 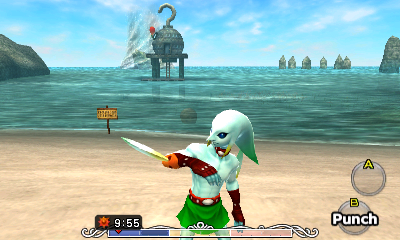 One of the more confusing parts of Majora was starting off at the Great Bay, where you first get the Zora Mask. This part was paced very oddly with a ton of small quests to do all at once. The remake hasn’t paced it better, making it very confusing to get into with a pirate fortress, Zora Hall and Pinnacle Rock to conquer to get to the third dungeon. Unfortunately, even worse is that Zora Link’s swimming has slowed down considerably, making swimming much tougher without draining your magic super fast. This part was always overwhelming, mainly because much of it has to be done in a single 72-hour span and understanding the pattern has to be done first before executing it, but it’s unfortunate that it doesn’t seem to be edited much to help out players.
Other than the slight gameplay changes, the most notable of all is the visual bump up. The game sports some much better textures and main characters were totally redesigned though much like Ocarina, many of the NPCs don’t look too different. While everything looks great, especially in 3D, the game’s framerate runs pretty poor whenever there are a few enemies on screen.
The game launched with the New Nintendo 3DS, and so it uses one of the features of the new handheld: the C-Stick (though the Circle Pad Pro is also an option for older models). Unlike the N64 version, you can now freely move the camera, and it makes a world of difference since now you don’t have to dump yourself in and out of first-person whenever you’re figuring out a puzzle, hunting stray fairies or taking in the scenery. One annoyance with it is that you can’t freely look around while on your horse, which was something I always did when on the sailing in Wind Waker.
Other than a few issues, Majora’s Mask 3D is a worthy update to a game that needed a new audience. It’s different, odd and it broke the traditions of Zelda – something Nintendo’s been doing again with the recent and upcoming titles. That’s why this is the perfect time releasing it so that the readjusting audience can live or relive this classic. Mark this as another gem in the Nintendo 3DS library.
Rating
8.5
Pros