By: | Movie News | February 9, 2012
Looks like Alex Proyas' religious epic Paradise Lost has entered a whole other kind of hell—development hell. Legendary Pictures has scrapped plans for the film based on John Milton's epic poem due to visual effects budget issues.

Initially set to star Bradley Cooper as Lucifer and Benjamin Walker (Abraham Lincoln Vampire Hunter) as the archangel Michael, Paradise Lost was to begin filming this summer (after being delayed nearly six months) and arrive sometime in 2013. Deadline reports the budget problems were directly related to the visual effects costs. One can imagine a fight between heaven and hell doesn't come cheap (see concept art below). 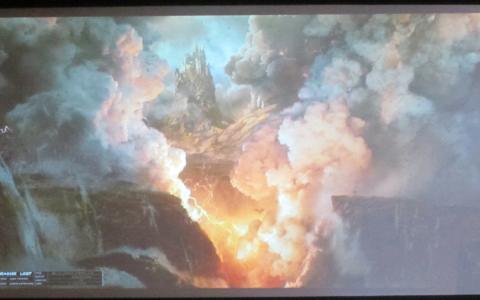 The loss of "Lost" follows in the footsteps of a couple big projects from Legendary as well as distribution partner Warner Bros. When production was pushed back on "Lost" the first time, it also came with the announcement that budget problems had derailed David Dobkin's medieval action/adventure film Arthur & Lancelot, which Deadline said cost the studio $2 million just to for the script. That film was going to star Kit Harrington (Game of Thrones) and Joel Kinnaman (The Darkest Hour), but could still find another home if a studio wants to gamble on the $130-million price tag. Akira is another project Warner Bros. recently suspended.

Paradise Lost will likely stay at Warner Bros. until the passage of time brings with it cheaper visual effects. One can be sure that with his summer free, Bradley Cooper's agent will be getting plenty of calls.