The idea of fairy tales being real is not an untapped one, but Enchanted brings an interesting twist to the concept by making the world dark and gruesome, a la Brothers Grimm. Take some parts of fables, add some elements of steam punk and maybe a little of the aforementioned Grimm fairy tales and you’ve got the world of Enchanted.

We begin like all good fairy tales should begin, with Jack (of the bean stock fame). He’s in the troll killing business and currently taking down two big uglies for a small town. After he’s defeated them the town is reluctant to pay him since everything was destroyed in their battle. Jack assures them that if they hang the trolls head at the front of the village that no more trolls will come to kill their sons or rape their daughters. They pay him and he fills his motorcycle up with the blood of the trolls, then takes off down the road. This gives a strong view of the world and the work that the Enchanteds must do to survive. 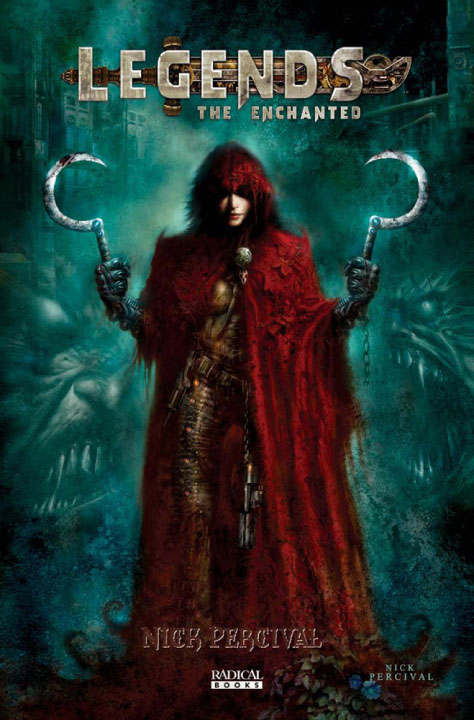 In the bionic woodlands we find Pinocchio, a mix of metal, flesh and nature, chained up like a human sacrifice. Here we’re introduced to his captor, an ugly woman known only as Hag. She hates the Enchanteds and is attempting to eliminate the magic that keeps them from being injured, so that they might be killed. The trick is finding the Enchanted’s charm, a simple item that gives them their power. In Pinocchio’s case it is the nail that Geppetto used to create him. The Squire who rules over the City of the Crooked Spire also wants the Enchanted dead; he arrives to watch the Hag destroy Pinocchio so that the others can be hunted. The Hag drives the nail through his body and begins the domino effect of turning the Enchanted into mortals.

Days later we find Red Riding Hood gathering flowers in the forest. The flowers are for her daughter who is ill; the two sickles in her hands are for the wolves that are hunting her. The pack of wolves leaps out to attack Red, who quickly disposes of her would-be attackers. The problem is Red isn’t healing from her battle like she normally would. It seems the effects of the Hag's spell have started to take hold. The story continues introducing other Enchanteds and their abilities building towards a final battle between the Hag and her son, the troll who lives under the bridge.

The plot is pretty simple, evil Hag hates the beautiful Enchanteds and wants them destroyed. The Enchanteds are forced to band together to defeat her and survive. The real catch of this story is the art and the interpretation of the characters. Nick Percival, the creator, writer and illustrator of the book, takes a unique look at the characters by giving them charms and basically making them monster killers.

Each character has a gimmick or power that falls in line with his or her own fairy tale, but it’s never dwelled upon in the story. He works it in so that it makes sense and doesn’t need an explanation that would detract from the story. Everything is very cleverly mixed together and simplified for the length of the story.

The art has a mixture of styles working for it. First are the notable CG backgrounds and character models that Radical is known for, but taken up a notch. The women are bold and beautiful while the men tend to be on the ugly side. It’s a bit of an understatement to say that the world is ugly. The world looks like at one point it was an advanced society nearing utopia, but now it has fallen. There’s technology, drugs and commerce everywhere, but everything is overgrown with trees and nature.

The book in general is very dark and full of adult themes. There’s mention of at least two red-light districts in the story and plenty of killing.  It’s not to be confused with simple children’s stories. If you like horror interpretations of fairy tales much like Alice in Wonderland, then you will definitely like this graphic novel. If you’re more into fables with their bright pages and light hearted nature, you may find something to latch onto with this story as well. The book is wonderfully crafted with a decent story and strong artistic style making it a worthwhile purchase.

Come for the art, stay for the wicked character designs and powers! Follow Dustin on Twitter and leave your thoughts below.