I am a newbie to Legion of Superheroes, and this is the first Legion of Superheroes comic book I have ever read. So, for the people who picked up this series on whim or picked up the issue for new creative team you may be in the same boat as me. The reason I picked this issue up was because Tom Defalco is the new writer for this series. He is my favorite writer and he wrote my favorite comic book series Spider-girl. 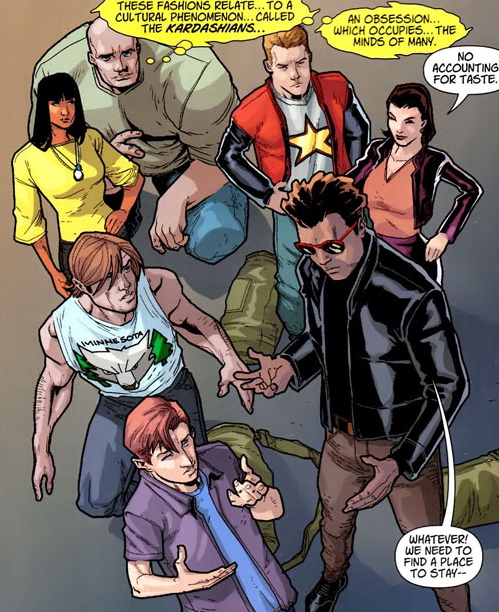 The cover for the issue did not really get me excited to read this issue. I guess because I do not know much about these characters. But maybe for fans who have read this since issue 1 may have enjoyed this cover a little bit more. I thought the art was pretty good, but for the characters in the background I thought it was a little sketchy.

In this issue the Legion of Superheroes have decided that they should try to live a normal life in the present time because they have no idea when they will be going back to their time. They decide that they should get secret identities. In the team mean time one of the other Legion Lost member, Timber Wolf, is trying to deal with a drug deal and got a tip from a new friend.

I thought this issue was pretty okay. It was not the best issue I have ever read, but for new readers you were not completely lost and you received a good story. Tom Defalco does a great job in explaining what had happened in the last seven issues. I also like how Tom Defalco is changing the direction to this series. It is not going to all be about the mission the Legion Lost team has to deal with, but they are going to try to make a life in the present time. It is a great idea that the team is going to get secret identities. Tom Defalco is great at writing the balance of superhero life and secret identity life.

I would say give this issue a try and pick it up. I thought it was a good start with a new creative team. Do not be afraid that you will be lost if you are a new reader of the series. Like I said I have never read one Legion of Superheroes issue and I understood what was going on. Tom Defalco did a great job on explaining the last couple of issues.