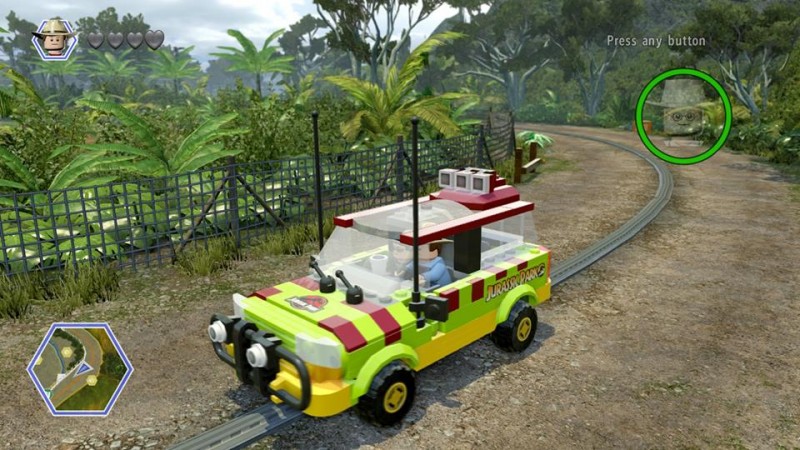 But sometimes I just wanted to do the next mission and it could be a hassle to find the next waypoint. I assume that some younger gamers would find the travel time and searching for these missions to be annoying. Luckily the open world areas are filled with stuff to break, dinosaurs to fight and puzzles to solve. So even the longer treks to mission waypoints have stuff to do on your way there.
Each Jurassic Park film is recreated in LEGO form, but they don’t follow the movies exactly. In fact some of the differences in LEGO Jurassic World were changes I really enjoyed. In Jurassic Park the film, Dr. Grant leaves Lex in a storm drain to go help save Timmy who is stuck in a truck, which itself is stuck in a tree. In the game version of this scene Lex, Timmy’s older sister, actually helps Dr.Grant save Timmy. Other changes include cutting some parts that were more exposition filled or parts that were too graphic. 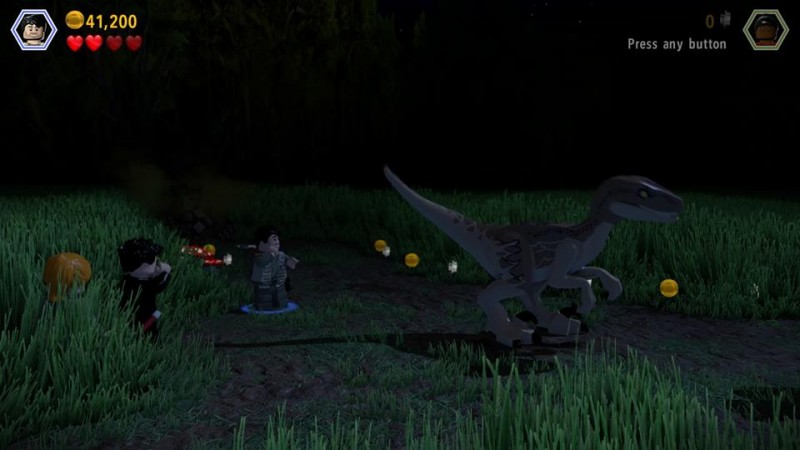 One change that I found a bit disappointing was the lack of death. In LEGO Jurassic World you will see skeletons and you will see people lose their head or arms. So death and injury exist in some form, but the game goes out of it’s way to make sure everyone lives. It really makes the sections where you are fighting dinosaurs feel less exciting. You have nothing to fear. You won’t get injured or die. I understand this is a kid friendly experience, but I feel like you could have characters or dinos get killed in non-gruesome ways.
It’s not just set-pieces and dinosaurs that are recreated in LEGO form, but all of the characters from the Jurassic Park series are available to play as in LEGO Jurassic World. And I mean all of them. Remember that guy at the beginning of Jurassic Park 3 who is Eric’s step-dad? You can play as him. You remember the guy at the beginning of Jurassic Park who gets grabbed and eaten by a Velociraptor? You can play as him as well. Hell, Steven Spielberg and Mr. DNA are playable characters in this game. It’s weird. But in a funny way. I love the dedication TT Games put into making sure every character ever is a part of this collection.
I also was really impressed by the quality of the animations and visuals. The dinosaurs especially look great and move like they have real weight to them.

The actual gameplay of LEGO Jurassic World is similar to the past LEGO games. You and an AI controlled character explore fairly linear levels, solving puzzles and doing some basic combat. And just like those older LEGO games, you can have another person pick-up a controller at anytime, hit start and that’s it. They are playing with you. No menus to worry about. No weird logging in or restarting the game or the level. True drop-in / drop-out co-op.
The AI is good, but having another player is handy for solving some of the more intricate puzzles. None of the puzzles in Jurassic World are really hard or time consuming, but some do ask for accuracy or timing and sometimes the AI let me down. So having another player was nice. Also LEGO Jurassic World is just more fun with another person. Especially if that person is a huge Jurassic Park fan. You both will be spout your favorite quotes for hours as you zipline, jump, fight and build your way across the 6-8 hour campaign.
Each level you are unlocking extras depending on what you accomplish. Find all the mini-kits, unlock new dinosaur skeletons. Find all the amber, unlock new DNA to use in the create your own dinosaur mode. And nearly everything you break and everything you build will reward you with “studs”. These studs are how you unlock new characters and vehicles. So if you want to play as Collin Trevorrow, the director of Jurassic World, you better save up your studs. 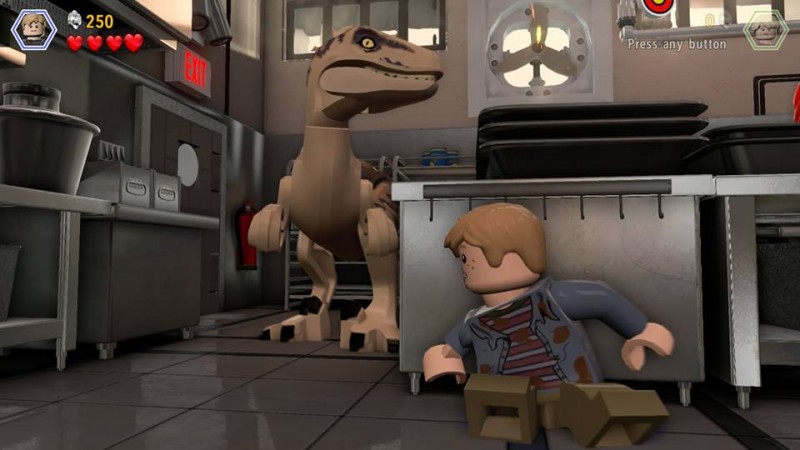 Outside of the standard levels, the open world areas contain their own mini-missions and side quests as well as races, studs to find and other collectibles to...well collect. None of these are necessary for beating LEGO Jurassic World and none of them will take more than a few minutes. But I liked the way they are dotted around the open world. So as you make your way to the next mission you might see a sick dinosaur who needs some help. Or maybe a person who is trapped or being chased by a dinosaur. Many of these side activities need characters you won’t have right at the beginning.  And just like the older LEGO games, after finishing a level you unlock “free-play mode” which allows you to pick any character and change who you play as on the fly.
Being able to run around as a Baby T-Rex during Jurassic Park’s famous kitchen scene may not be canonically accurate, but it sure is funny. And as a HUGE Jurassic Park fan, I really appreciate the tons of little easter eggs, inside jokes and references. I mean they make fun of the weird laugh Jeff Goldblum does in the original Jurassic Park. These guys and gals understand Jurassic Park and it feels like they enjoyed stuffing the game with fun winks and nods to the franchise. 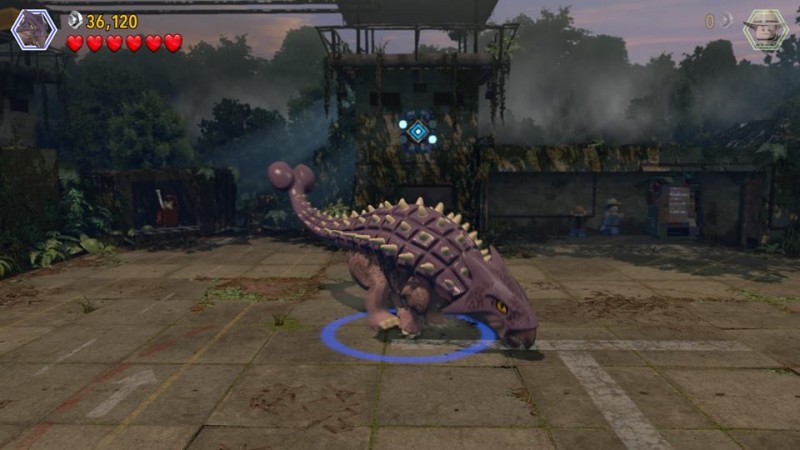 Unfortunately LEGO Jurassic World is also filled with bugs and other issues. I had problems with my controller not working, characters getting stuck in terrain, trophies not popping and even had two different crashes. These issues will probably, I hope, get patched out at some point soon. But I would warn those looking to play this that it might be a bit rough at times. Which can be really frustrating for younger gamers just looking to have fun and play with dinosaurs. 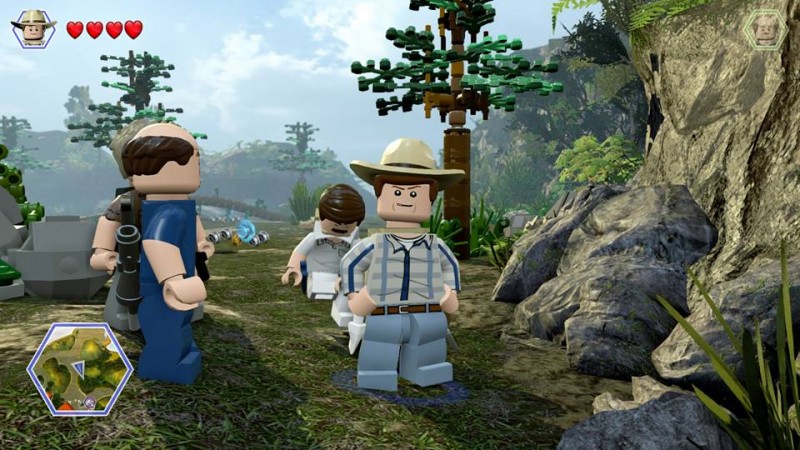 LEGO Jurassic World is a great looking game that is a blast to play with someone else. The open world areas are fun to explore, even if they can sometimes feel like filler. The amount of characters and side content is great as it seems like there’s always something new to discover. I also enjoyed making my own dinosaurs, even if that feature felt bare boned. Bugs and some repetitive gameplay are LEGO Jurassic World’s biggest issues. And one of those could be fixed in a few days/weeks.
But my love of Jurassic Park was able to get me through some of the rougher parts of the game. If you have a kid who loves dinosaurs or you yourself loves dinosaurs, LEGO Jurassic World might just be a great time for you.
Rating
7.0
Pros