From what we have seen of the game so far, the gameplay looks to be exactly what is expected from a Lego game. However Traveller’s Tales have revealed that it will be using a new engine which will add more detail to the game's cartoony graphics and also feature some new lighting effects along with the ability to display over 200 objects on screen at once, a new benchmark for the series. Along with these new engine features comes a modified camera viewpoint which Traveller’s Tales says will make the experience much more immediate.

Along with the graphical features of the engine, Traveller’s Tales are also using this engine to implement features which should freshen up the Lego experience for veterans of the series. These additional features include the ability to command large armies much like you would in an RTS game. The new engine also allows for a new feature called Story Swap which allows players to control two characters in different levels that progress simultaneously. 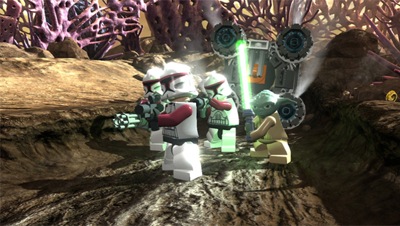 The game also features a new Battlegrounds multiplayer mode which pits players against each-other in an arena-like setting with goals such as defending a point from swarms of enemies, by using the unique abilities that each character has access to. While the ideas behind this new multiplayer mode are quite good, whether it will be implemented correctly remains to be seen.

Previous Lego games have all featured a unique hub (such as the famous Mos Eisley Cantina) from which all of the game's levels are accessed, and this one is no different, with the game’s hub being set on The Resolute, a Republican Battle Cruiser.  The vehicle levels of the previous games have been expanded so that the players can now land their vehicles, and these levels have also been restructured so that they are now divided into tiers and players have different objectives to complete on each tier of each level. 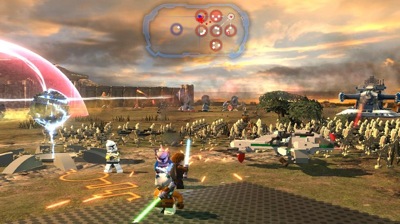 The big thing that Traveller’s Tales are pushing with this iteration of the Lego Star Wars franchise are large scale battles that put the power of the new engine to good use with hundreds of characters fighting on screen at once. The last few Lego games have been set in other franchises and it should be interesting to see how Traveller's Tales apply the lessons that they learned through the development of those titles.

Lego Star Wars III: The Clone Wars is being developed by Traveller’s Tales and published by Lucasarts. The game will be on all platforms and is set to be released on March 22nd in North America, March 25th in Europe and March 30th in Australia.