Before I begin this, I want to throw out a disclaimer: Halo 4 is not a bad game. I've put about fifty hours into the game all around, and I've had a blast with it. But like any good game that die-hard fans have been clamoring for, Halo 4 is not without problems. With that being said, I do want to applaud 343 Industries for a mostly job well done with the newest edition to the franchise, and the first part in “The Reclaimer Trilogy”. But now that the dust has settled, many people are talking about story elements, changes in multiplayer, and of course, Halo 4's ending, which contains spoilers if you haven't beaten the campaign yet. While Halo 4 is good, here's some things that I hope 343 can learn from while they begin the process of developing Halo 5. Perhaps the most frustrating aspect of Halo 4 is that the game makes no notion of explaining some of these characters and events. The game instead relies too heavily on its expanded fiction thanks to the novels that are out there. Problem is, I don't think as many gamers have read all of the novels as 343 Industries probably intended while making this game. While I consider myself a die-hard Halo fan, I can honestly say that I've only read the first book, “Halo: The Fall of Reach”. So for example, when Master Chief first meets the game's antagonist, the diedect, everyone seems to know who he is, even Chief. Except me, the player. I had no idea who this guy was, what his history is, and why he's doing what he's doing. Now, it has been brought to my attention that when you collect the terminals hidden throughout the eight campaign stages, these fill in some of the blanks left in the campaign, however, in order to view these videos, you have to unlock the terminal, then go to the Halo Waypoint from the main menu in order to watch them. To me, this is a gigantic failure on 343's part. Why do I have to go to an outside application from the main game to learn about a core element from the story? I would have been happy with a simple mention of who the diedect is, or a flashback to something pertaining to his character and how Master Chief knows him. For Halo 5, I'd like to see more of this storyline explored, but more of it explained more or less. Who are the Promethean's? What is their overall master plan, outside of the events of Halo 4?

Which leads me into the next thing 343 needs to be mindful of: don't rely on the Covenant so much. Look, Master Chief fought these enemies time and time again in the original trilogy, but here I just think these enemies are way over used, where as the Promethean enemies are heavily underused. Now yes, I know the argument can be made that there are only three main enemies at the core of the Prometheans at this time, but so what? How many do you face on the Covenant side of things? You have grunts, jackals, and elites. Those are the three main enemies, and you will face the covenant a hell of a lot more times then you will face these new Promethean enemies. I'd like to see even more of these Promethean enemies in Halo 5.

Finally, and this is the big one. For anyone who didn't heed my warning at the beginning of this, look away now because this is a major spoiler: 343 needs to answer some questions about Cortana's death in Halo 5. The end of Halo 4, while fantastic, is a major down note for the series so far. Cortana has always been there for Master Chief, and now she's not, after her sacrifice at the end of the game. While it seems that dark days are ahead for Master Chief, I can't help but wonder if this truly is the last time that we will see Cortana. I for one, hope not. If that truly is the end of her, then the question is raised who will take over to fill her shoes in Halo 5?

Putting aside the campaign, I have to touch on the other two core modes that are offered in Halo 4, and offer up some suggestions to 343 for Halo 5. While I enjoy what 343 is doing with Spartan Ops, I'm a bit disappointed that when episode two was released this past week, it is more or less the same five maps you played in episode one, except you are going through them backwards. While I understand this is all “free”, I can't help but feel a little cheated that I have to wait five weeks to receive content that is already on the disc, and it doesn't help ease that wait period when I get my hands on a new episode only to discover the same levels recycled. Bungie really created a great cooperative mode with Firefight in Halo: ODST and Halo: Reach, and I would have loved to see that return here as well. While Spartan Ops is a good idea at the core, I'd really like to see 343 bring back Firefight in Halo 5. 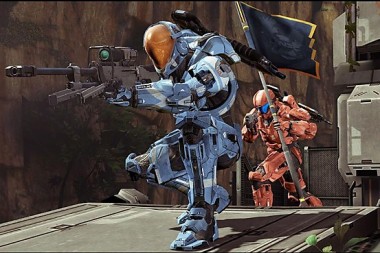 But perhaps my biggest gripes with Halo 4 are the changes made in multiplayer, and I know my voice isn't the only one crying out for changes. I did some research on the Halo Waypoint forums, only to discover that literally everyone posting on there is crying out for changes to matchmaking. While I applaud 343 Industries for making some of their changes to multiplayer, some of it just flat out doesn't work. The whole idea surrounding ordinances is good on paper, but has turned matchmaking into a nightmare. Instead of spawn points for weapons, players now must get a couple of kills or assists to get the ability to call in an ordnance, much like Call of Duty's kill-streaks, instead here it can deliver either a weapon, or a perk. However, the weapon ordnances are so random that literally matches become one sided when a team gets two or three of the same power weapon. I had one match where my team was facing an opposing team that all had spartan lasers. On Big Team Battle, that's insane. What's more frustrating though is that weapons aren't even really salvageable once someone dies anymore. Instead they seem to have a five second rule, where after five seconds to that person's death, they disappear. Good luck holding onto grenades too, as they've basically become obsolete. You will start with two, and then there is one spawn point on each side of the map, and that's it. Gone are the days of picking up weapons from downed enemies, except for weapons dropped in an ordnance. Why would you do this? It is completely broken.


To add to the already nightmarish wasteland of mutliplayer, vehicle spawns are also completely busted. One map in particular, “Exile”, has the red team starting with the advantage of a scorpion tank. So if you aren't the red team, you will lose. No questions asked there. Finally, I always prided the fact that Halo was the one multiplayer game that wouldn't dump you into an on-going match, and yet for some reason 343 has decided to go the “Call of Duty” way with things, and allow you to join matches in progress. This adds to my frustration, that about 5 times out of 10, I will be dumped into a match that I have no chance of winning because the game is half over. In other words, 343, you've done a great job “experimenting” with multiplayer, but let's get back to Halo multiplayer now.

But even with all of these gripes, I still enjoy Halo 4. The campaign is a great experience, I just hope that 343 can even out the story a bit when they release Halo 5.