Let’s Be Cops Review: Let’s Try To Be Funnier Next Time

By: Mitchel Broussard | Movie Reviews | August 14, 2014
“That was a good try, at least” is probably not the thought that filmmakers want bouncing around your head as you exit the theater. But, in the case of the newest buddy-cop comedy-action flick Let’s Be Cops, it is the unfortunate truth. It takes a premise ripe for comedic shenanigans, throws in two eminently likable leads, and flinches from hitting the gas full throttle. It has got quite a few genuine laughs in it, but the disappointment of what it could have been, should have been, easily prevents you from getting sucked in. Directed by Luke Greenfield (Something Borrowed, The Girl Next Door) and co-written by Greenfield and Nicholas Thomas, it is easy to see why an elevator pitch for this movie would totally work. Two sad-sack thirty-somethings (one a video game designer, one an ex-football hall-of-famer) realize after a costume party that people think they are real cops, and decide to see how far they can go with it. It’s a funny kind of play on a superhero origin story, and much of the film’s scant laughs come from seeing how far Ryan (Jake Johnson) will take the gag next. 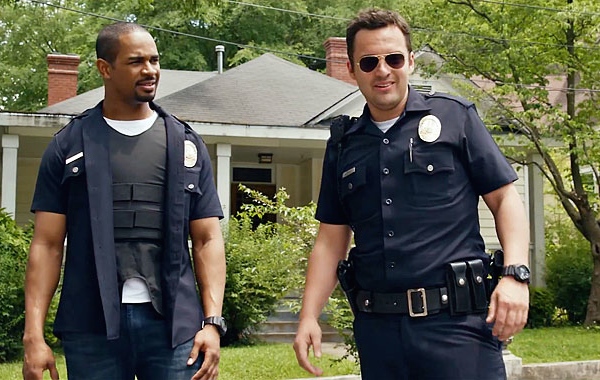 If you are familiar with New Girl, the sitcom starring Zooey Deschanel and the two leads here, then you know who these guys are. Johnson is pretty much Nick again, just less overtly paranoid about society taken out of that show's crazy alternate reality where yelling loudly solves all problems. He’s suffering from a hard bout of arrested development, terrorizing a local gang of pee-wee footballers and driving a car that everyone else but him can see how much of a piece of crap it is. Damon Wayans, Jr.’s Justin is a bit of a departure from Coach; he’s much more mature and put-together (even though of all the characters in the heightened reality of New Girl, Coach is by far the most mature and put-together), but a little Coach seeps in in his always welcomed effeminate mannerisms and spot-on slapstick. The screenwriters unfortunately give him a completely contrived zero-to-hero arc that feels so archaic you can practically hear the Screenwriting 101 professor clicking through the slideshow. His game proposal is rejected in an opening scene (by a group of so-called game designers who think Firefighters vs Zombies is a slam-dunk idea), he does not have much confidence, but whaddya know pretending to be a cop for a few weeks morphs him into a one-liner spewing, ego-stroking, boss-telling-off machine. Spoiler alert: his game gets made in the end. As a fairly passive fan of their previous work, I found workarounds to their shorthanded characters, but I’m not sure how much they would resonate with someone coming in cold. Wayans has his family’s dead-on humor, but can be a bit blank-in-the-face at times. He also tends to roll over Johnson in certain scenes. And Johnson himself is a bit unmemorable, with his every-man five-o-clock shadow and man-boy routine. 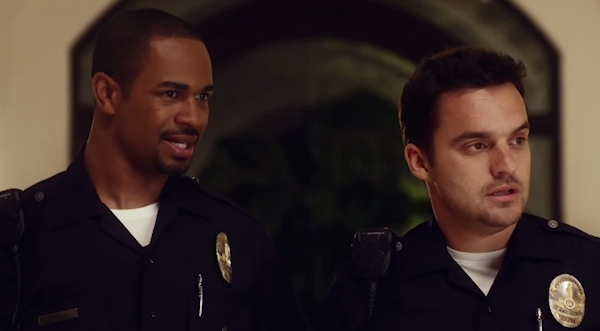 But what is a comedy without its humor? Let’s Be Cops does produce genuine moments of hilarity: be it in Wayans' turning a sobriety test into a striptease or a particularly off-the-riff remark by Pupa (Keegan-Michael Key). The problem here is pacing. The big jokes that land really work, but the small jokes in between that are meant to tide us over to the next set piece are dull as dirt. There is a running joke where Johnson promotes himself by ironing on badges to his outfit that is funny once and revisited far too often. Nina Dobrev’s Josie is seemingly made into a klutz for a millisecond of a gag, but it is never brought up or talked about again. She is also wasted as yet another thirty-year-old stuck in a dead-end job with big dreams. Yeah, this is Los Angeles, but could we at least have tried to have diversity in our stereotypes? In between the lame jokes are even lamer ones that simply involve a high-pitched squeal and an expletive. This is the kind of movie that thinks having its characters yell, “What the fuck!” after every insane scenario is a properly placed and brilliantly executed shot at humor. It’s just too scattershot of an enterprise to fully recommend. Its idea of humor is like a slightly annoying friend who enjoys the works of Judd Apatow but also quotes lines from Grown Ups 2 and thinks Nick Swardson is a genius. 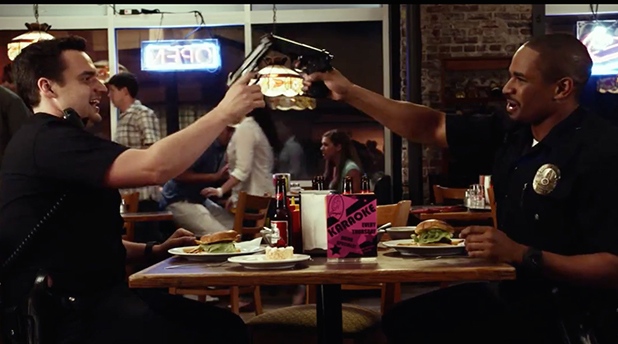 Then, of course, there’s the inevitable “real danger” that comes in (of course the exact restaurant the guys dine in is owned by the pretty girl Justin has his eyes on and just so happens to be the ex-girlfriend of a crazed mad man) but none of it ever sticks. From the beginning of the overblown final act to the end, the only reason the guys stick around is so eye-rollingly dumb (Johnson’s character getting that ever-needed third-act redemption) I thought I would pop a blood vessel. It's a by-product of that weird and oddly written script, really. Scenes that give you emotional whip-lash, like when Andy Garcia pops up out of nowhere and Ryan has to confront him, Garcia one second claiming he's infiltrating the bad guys and the next back to threatening his life. It just does not work that way. It's like they couldn't pick a character trait to land on so they flip-flopped in between good and bad, hoping the vagueness would make him mysterious where it just makes him, and the movie, dull. It's just one scene of many. 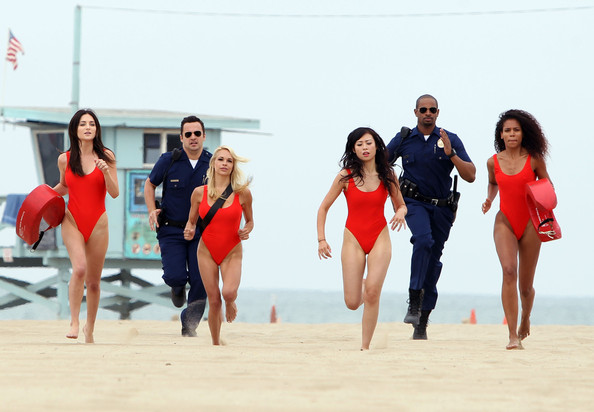 And that is pretty much the jist of Let’s Be Cops: this is a movie rigidly adhering to the fact that it is a movie. The two leads come together, disagree, inevitably fall-out, and come back just in time to get off completely scot-free for their misadventures. And it’s not the realism that I am longing for here. The Heat played with that, but did so in a way that didn’t seem so obvious and played-out. Maybe Wayans and Johnson are too similar to one another and not so yin-and-yang that these sort of movies need. Could be, but in my opinion, much of the blame lies in Greenfield and Thomas’ script. As the old adage goes: good scripts can be made into bad movies; bad scripts can't be made into good ones. A movie called Let’s Be Cops didn’t need to be high art, but a little more attention to detail could have gone a long way. It was admirably put together on a low $17 million budget, but this is a film that looks, feels, and plays out like a made-for-tv movie. In the direction, lighting, low-risk action, the ironic music, and, unfortunately, occasionally the acting. “You get what you pay for”, Ryan boasts, his small gut bursting out of his cop uniform in an awkward scene where a group of hefty bridesmaids are made the butt of the joke for mistaking the guys for strippers. You get what you pay for, indeed.
Rating
5.2
Pros