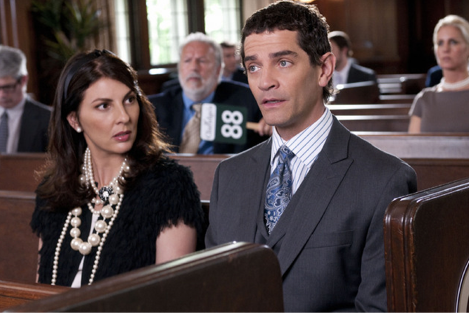 Or at least, they brought in someone close to him.  In this case, it’s Keller, one of Moreau’s 'top lieutenants' and an art smuggler, and played by veteran of True Blood, and just about every other television show that’s ever been in need of a British villain, James Frain.  But in their attempts to bust him, our merry band of thieves uncovers the fact that he uses unknowing children to smuggle his goods, often leading to them ending up in jail.  Naturally, this doesn’t sit well with Nate and his gang of do-gooders and this plotline leads to an unfortunate return of the heavy-handed sentimentality that had been noticeably absent from the show recently.  Fortunate for us, these only drag down a few of the scenes, and for the most part, the episode is as light and fast moving as I like my Leverage to be.

The con involves Sophie posing as a Duchess (who apparently she has imitated, or actually been, before) and promising Keller a prestigious title if he smuggles some goods for her.  This includes a diary that supposedly belonged to the mistress of King George III, which Hardison, in some of the episodes funniest scenes, must recreate.  His attention to detail means making the ink and glue by hand from the exact ingredients used in the 18th century and he becomes increasingly stressed over the short amount of time he has to do it.  We also get the amusing sight of Parker working as an auctioneer, referring to bidders by their unfortunate physical attributes; “$10,000 from the toupee in the third row.”.

One of the nice surprises this episode is how intelligent the villain appears.  In previous weeks I’ve bemoaned the stupidity of the foes that our gang has been going against, so here it’s a nice change of pace to have a bad guy who is actually one step ahead of us (he catches on that he’s being conned almost instantly and tries to figure a way to run a con of his own on Sophie).  Of course, this doesn’t stop him from losing and ending up in jail, but Keller still makes a welcome addition to the Leverage gallery of foes.

But really, the episode belongs to Sophie, who’s past has remained a mystery for the show’s run.  Here we see her grappling with the morality of her past actions and how she used to steal art that might very well have ending up being smuggled by children, just as these pieces are.  We also find out about her past as a Duchess (named Charlotte, apparently) and how she had to flee this life due to some sort of scandal.  It is unclear at the end of the episode how much of her Duchess backstory is real and how much of it was just another con (she claims the Charlotte name was just a pseudonym).  It’s nice to get a glimpse of where Sophie came from and why she’s here and hopefully future episodes will clear up just how much of what we learned this week was true.  Knowing this show, however, I’m not expecting any answers before next season’s finale, at the earliest.