At this point it’s probably time to accept what Leverage is and embrace it, warts and all.  The show, in its third season, seems perfectly content to follow the same blueprint, week after week, with nary a bit of growth or development.  If you’ve watched Leverage before than you'll know if you’re a fan or not, and if the show’s positives outweigh it negatives for you, then that’s the best you’re going to get.  Those of us who enjoy the show but are still waiting for it to improve on its nagging issues and make a leap in quality should stop holding our breath. 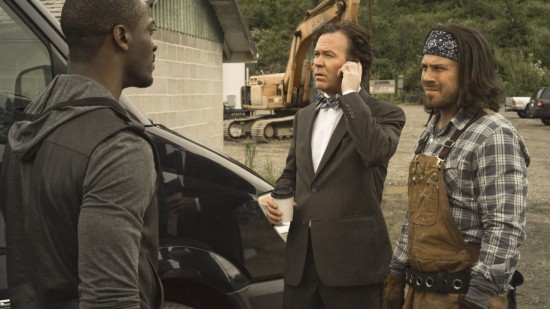 This week’s episode, The Underground Job, has what I always enjoy about the show (a clever con, a twist in the end, the team working together as a unit, funny accents and costumes) and a lot of what I don’t (overly cheesy and serious scenes with the victim, bad guys whose actions defy logic or intelligence).  So basically, it’s an episode of Leverage.  Take it or leave it.

The con involves stealing money from a coal mine-owner (guest star Bruce Davision) that was meant to go towards mine safety, but ended up just going to Attorney General to ensure no more problems for the mine.  Which brings up a question:  If the evil mine owner wasn’t going to keep the money, why not spend it on mine safety?  Does it really matter to him whether he gives the money to the Attorney General or puts it into the mine?  Either way he’s spending the money, and while paying off the Attorney General might shield you from safety inspectors, actually making the mines safer seems like a more surefire way of doing that.  But I digress.

The job does allow the group to play the usual assortment of eclectic roles.  Nate gets to sport a bowtie while posing as a man trying to buy the mine.  Elliot gets to wear what Nate accurately refers to as a “Village People outfit” as he acts as a miner.  And, most enjoyable, Parker, usually only allowed to steal things and make oddball observations, gets to try her hand at grifting, posing as a new employee of the Attorney General, complete with an over-the-top Southern accent.

The plan, which involves convincing their mark that his mine contains a valuable mineral and he should pay them to mine it, is fairly clever, but as usual, the parts where the group meets with the victims is far too heavy-handed.  Here it’s Elliot befriending a young miner named Cory (Colton Lasater).  Perhaps because the kid knows who Paul Revere is, or because he brings his grandfather’s lunchbox to work with him every day, Elliot takes a liking to him and makes it his personal goal that this kid get himself a better life.  Whatever the reason that he likes the kid, their scenes, especially compared to the enjoyable cons happening around them, bring the episode to a screeching halt.

Also, as someone who’s complained in the past that the show’s villains have been far too stupid to be worthy of our heroes, I was very happy when the Attorney General realized early on that she was being conned and called the police.  Of course, then she went and told Sophie that she had called the police on her, giving Sophie time to escape.  So my joy was short-lived.

As per usual, the good outweighed the bad, and I enjoyed the episode.  But, with a cast this good and a concept so fun, I can’t help but wish the show-runners would take steps to up their game and make the show something special.  I know it’s time I gave up hoping for that to happen, but I can’t help it.  Maybe one day they’ll surprise me.