Life Inside a Krater

It's an exciting time to be a fan of MMOs and, with a number of new games being released this year, you will all be spoiled by choices. Krater is a MMORPG that stands out among its competition. Rather than the standard fantasy style RPG set in an entirely different world, Krater is set in post-apocalyptic Sweden! The base pillars of the game are crafting, exploration and consequence. This not only allows the player to level up and, therefore, improve themselves, but consequence also refers to the permanent injuries one can face, including death.

Not only is Krater going to be an awesome new MMO to grace the online gaming community, it also features a multitude of gaming mechanics, including unit-based combat found in real-time strategies. You can expect to see the same sort of RPG mechanics as the original Fallout games. 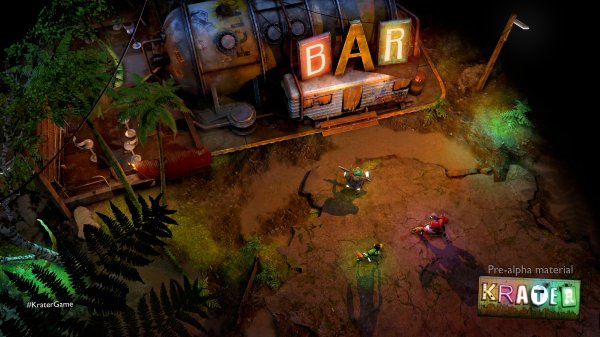 The story of Krater takes place in a world devastated by nuclear attacks and bio weapons. A powerful weapon launched at a military compound causes the ground to break away, revealing a massive crater in the Earth. Hidden inside this crater is an oasis of fresh drinking water and healthy soil underneath. The game takes place in the areas built in and around this paradise.

A lot of fans of Fallout were disappointed to see the original top-down RPG turned into a first-person shooter. While the reborn Bethesda version turned out the be a massive hit, Krater will bear resemblances to the old Fallout games fans knew and loved. The main thing that intrigued me when I heard about Krater was that Fatshark wanted the community and fans to help them design the game from in-game settlements to visual mechanics. I love that fans were given access to something that is normally kept secret by game designers. By doing this, Fatshark opened themselves up to a lot of critique, but they also gained valuable insight and ideas from those who wanted to give their input.

The other major difference that caught my eye with Krater was the idea of having expendable characters. Characters are fully customizable, and you can choose from humans to giant mutants, resulting from the explosion in Sweden. Fatshark want players to lose characters and replace them with new ones, and they're even playing around with the idea of a hard mode, which would include permanant deaths and knockouts. While permanant death is self-explanatory, knockouts would be allowed a certain amount of times, and once you'd reach the limit you would be permanently dead. It's certainly different to your usual MMO like WoW, Rift and SWTOR, where—I must admit—I have become partial to death-travelling to the nearest town. The hard mode would seperate the men from the boys, so to speak, and only the most serious hardcore players would be able to survive. While this is only a thought, I think it's an interesting premise and I would be curious to see how it would work.

A basic search for pictures proves how beautiful this world is. Torn apart by war, man and mutant have found a home in a beautifully lush and lavish section of the world running deep below the surface. Besides the obvious barren landscape everywhere else, this little slice of life survivors have migrated to is almost utopian, which, in itself, makes me want to play it. The mechanics of the game are so unique and interesting that it's definitely worth a play. Fatshark have confirmed they will be partaking in beta trials for those who preorder the game, allowing players to experience life inside the Krater before the majority.

For those of you who haven’t heard of Krater and want to check it out, here’s the trailer:

Krater is set to be released June 12 of this year via Steam, and a Mac version will be available in July.