Last week’s The Expendables took almost every action star of the last twenty years and threw them all together in the most fun bloodbath I’ve seen in a long time. In our latest feature at Player Affinity, we're trying to recommend films you might not have seen based on what's hot and in theaters, but in this case, there's decades of action films to choose from. So here’s a look at some other flicks our stars have been in that you should check out. 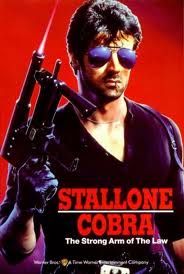 Sort of the 1980s equivalent of Dirty Harry, Cobra has Sylvester Stallone in that oh-so-unfamiliar story of a cop who hates playing by the rules. Faced with a new crop of Neo-Nazi “eliminate the inferior people” villains, Frank Cobretti (Stallone) joins forces with Flavor Flav’s ex Brigitte Nielson to exterminate this new threat and restore order to that oft-afflicted City of Angels. Rockin' a whopping 8% on rottentomatoes.com, it's falls into the so-bad-it's-good category. 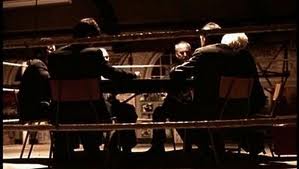 Before The Transporter, Crank and Snatch, there was a movie that introduced us to not only the action star Jason Statham, but also to director Guy Ritchie. Statham stars as one of four friends who pool their money together for a high stakes poker game, but find themselves in hock to a loan shark for a few hundred thousand quid after falling victims to a cheater. Now it’s either get the money or get buried.The rest of the film has them consorting with all kinds of less than savory individuals in London’s criminal underground. Ritchie surprises often with his trademark twists and crackling dialogue all the way to a terrific conclusion.

American audiences first exposure to Jet Li came from Richard Donner’s Lethal Weapon 4 where he plays the lead antagonist in a Chinese organized crime ring that dabbles in everything from human trafficking to counterfeiting and terrorism. Li’s presence in the beginning of the film isn’t all that menacing, which makes the climax of the film hit that much harder when you see him beating the piss out of Riggs and Murtaugh after being impaled with a rusty piece of rebar. The Expendables and the Lethal Weapon series are kindred spirits in their use of over-the-top comedic violence. Perhaps most memorable is the opening scene where Riggs convinces Murtaugh to strip down to his boxer shorts to provide a distraction to a flamethrower-wielding killer. 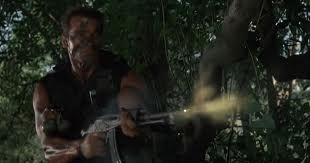 Action superstar Arnold Schwarzenegger plays awesomely named John Matrix in Mark L. Lester’s one-man-army action flick from 1985. When goons from the South American country of Val Verde kidnap his daughter, Matrix will kill, and kill, and kill, to get her back. With the help of a hapless flight attendant (Rae Dawn Chong), Matrix dispatches over 80 enemies in his pursuit. Full of classic Schwarzeneggerisms (“I eat Green Berets for breakfast, and right now (punch!) I’m very hungry!) and explosions alike, Commando has earned its place as an action cult classic.

Most of us are familiar with the tale of underdog boxer Rocky “The Italian Stallion” Balboa. Two sequels after the only one that was really cinematically sound, we arrive at Rocky IV. By now we know how these movies work. Rocky (Sly Stallone) is down on his luck, receives inspiration, picks a fight, almost loses, then wins. Really the only thing that changes is the villain. It takes a special breed of badass to kill Apollo Creed and make Sylvester Stallone look miniscule by comparison. Dolph Lundgren is of that breed. In one of his first roles he effectively steals the movie away from Stallone, uttering arguably the most quoted line in all of the Rocky films: “I must break you.” The film is hilarious in its abundant patriotism; when Rocky the underdog inevitably beats his opponent, he beats communism as well. USA! USA! USA!

Fun Fact: Die Hard was originally conceived as a sequel to the aforementioned Commando and was supposed to star Arnie Schwarzenegger as well, which is mindblowing because the two films are radically different from each other. As mentioned in my review of The Expendables, Die Hard gave us something the genre hadn’t really seen before: the reluctant action hero. Willis’s John McClane actually fears for his life. Alan Rickman’s villain Hans Gruber intimidates with his cunning and intellect, not his physical presence. The action is tempered with scenes of McClane, bruised and bleeding, asking God not to let him die, and is done so well that it’s my favorite action film of all time.

So, what are some of your favorite flicks featuring these guys?