Like The American? Try Good Night and Good Luck

Allow me just for the briefest of moments to go on a diatribe. What the hell is up with trailers? There’s a saying about them: The movie itself is what the director wants the movie to be, the trailer is what the studio wants the movie to be. I can’t remember a more egregious case of a trailer representing something that was so far removed from what the film actually was than the one for The American, which painted it as the most insane action thriller George Clooney’s ever done. Even the poster lied, with a still of Clooney running while wielding a pistol. A better representation would’ve had him sitting a table manufacturing a rifle while a topless hooker waits in the background. The film’s a leisurely paced drama, something one would have no trouble in arguing is the opposite of the slam-bang fly-by-the-seat-of-your-pants action flicks the trailer disguised it as.

The film as it exists is indeed a good one, but perhaps not for the action junkie that expected something totally different going into it. Those looking for that sort of thing can quench their thirst on any number of Clooney’s previous efforts including Out of Sight, The Peacemaker, and Ocean’s Eleven. For those who enjoyed spending a few days following Jack/Edward in The American, there’s another quiet, people-oriented film you should check out.


Our selection showcases Clooney’s abilities as both a writer and a director: Good Night and Good Luck. The events of the film take place in 1953 during the age of McCarthyism as Edward R. Murrow stands up to the censorship and oppression that resulted in many people’s lives being ruined because their sister read Marxist doctrine once in college. 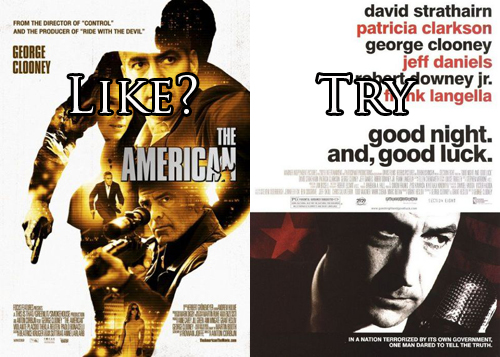 David Strathairn turns in a fantastic performance as Murrow, supported by Clooney as his producer Fred Friendly, as they and the rest of their small group at CBS risk not only their occupation, but also their livelihood and possible jail time to defend free speech. The Academy nominated the film for a bevy of awards and if there was one it should’ve won (it didn’t win any) it should’ve been Best Original Screenplay. Clooney and Grant Heslov’s dialogue has a great punch to it, both in Murrow’s own words regarding McCarthyism and his witty comments off the air. Take for instance a scene where Murrow is talking with his boss about funding advertising for their special. 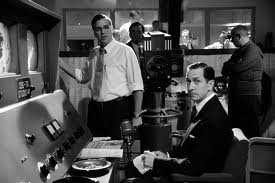 “We’ll split it, Fred and I. He just won’t have any presents for his kids at Christmas.”

“Well, don’t tell him that. He loves Christmas.”

Shot in beautiful black and white, Good Night and Good Luck is one of those films that immerses you so deeply you can almost smell the cigarette smoke and Friendly’s pomade (which is probably still Dapper Dan). It has the power to inspire gratitude for the ability to share our opinions and beliefs, and it is, I’d say, in the top five films Clooney has put his name on.

Readers, I’m curious. What are your opinions on black and white films? Love them? Hate them? Doesn’t matter at all? Let me know.