This is PlayerAffinity.com, right? We play Call of Duty and spray our enemy’s brain on the wall behind him with our sniper rifle! We play "Red Dead" and massacre whole posses with no trouble whatsoever! We are men! What use do we have for a movie such as The Switch, or Rob Reiner’s 1989 rom-com classic When Harry Met Sally? Those are for the girlfriends that our WOW-playing-asses don’t have, or people that are, as the Governator put it, “girlie men!”

Nah, not really. Perpetrators of the above stereotype would have us think so, and yes, most guys would rather see a good horror, or action flick, or comedy, or drama than a chick flick at the local theater. But it isn’t because we’re averse to love stories, it’s because we’re averse to formulaic and derivative ones, which the majority of rom-coms unfortunately tend to be. Do you remember The Wedding Date, The Wedding Planner, or My Best Friend’s Wedding? Neither do I, except that without fail two beautiful, usually well-to-do people are having issues finding love, they get together, shit hits the fan and they break up, but they eventually realize they love each other and get married. Invariably the girl I’m with begins to wonder why our relationship isn’t like the one in the movie on the screen, and after another one of those talks, I’m in the car wondering why I didn’t just see “The Expendables” for a second time.

Truth be told, I bet that most of us here at the greatest of all sites game-related are hopeless romantics, folks who all hold a torch for that special, unattainable dame or dude in their lives. God forbid, maybe you’ve even fallen into that damn “Friend Zone.” Movies such as The Switch and When Harry Met Sally empathize with this particular crowd, of which I’m a part, and for that reason they engage me. How often do you really think Matthew McConaghey has been turned down?

When Harry Met Sally begins, appropriately enough, with Harry (Billy Crystal) meeting Sally (pre-surgery Meg Ryan). The two are acquaintances through a mutual friend who are both traveling to New York and are carpooling together. In the course of their lengthy trip, many topics are covered. Notably among these are their discussions on relationships

“Men and women can’t be friends because the sex part always gets in the way,” the sardonic Harry quips. “No man can be friends with a woman he finds attractive.” Sure, the friendship can last for years before it escalates or falls apart, but one or the other will happen. That is more or less what it boils down to, but, just like relationships, it’s more complicated than that. The rest of the film is an argument to support that thesis. 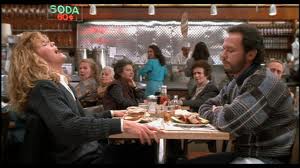 What distinguishes When Harry Met Sally from its peers are primarily its casting and its writing. Meg Ryan and Billy Crystal are believable as everyday people. Sally’s beauty is of the girl-next-door variety and is offset by her high maintenance quirks. Harry is small and sarcastic, not your typical romantic lead. Nora Ephron’s script has their relationship languidly develop over the course of twelve years, each barely afloat in the waters, watching their friends succeed in romance while they flounder.

It’s particularly difficult to mention the film without mentioning its most famous scene, as Harry and Sally discuss women “faking it” in a restaurant. The scene has gone down as one of the funniest in cinema, and rightfully so. It’s a perfect encapsulation of what the whole film successfully achieves: dissection of relationships with wit and humor.