Like Unstoppable? Try Speed (the movie, not the drug)

“Pop quiz, hotshot. There’s a bomb on a bus. Once the bus goes fifty miles an hour, the bomb is armed. If it drops below fifty, it blows up. What do you do?”

Excellent premise for a movie, if I do say so myself (R.I.P. Dennis Hopper). This last weekend Tony Scott’s new film Unstoppable did what Speed did in 1994, thrilling audiences with a tale of a huge machine that needs to be stopped - if only it were that simple. 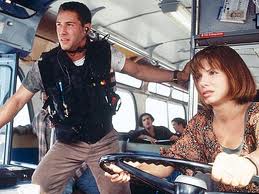 Jack (always a good name for an action hero played by Keanu Reeves) is an LAPD cop called to a building where someone is holding an elevator full of hostages and threatening to kill them unless he gets his money. The villain, Howard Payne (Dennis Hopper), is understandably agitated when Jack and partner Harry (Jeff Daniels) foil his plan and save the would-be victims. Under the impression that Payne is dead, they resume their normal lives. One bright, sunny morning, Jack goes into his local coffee shop, where he knows the workers by name as well as the other regulars. After he gets his muffin and goes outside he’s greeted by Payne by way of an exploding bus. The terrorist calls Jack on a local payphone.

“Do I have your attention now, Jack? I spent two years of my life planning that elevator job, and now I’m gonna get what’s coming to me.”

Bus 2525 is currently traversing the LA freeways, and if Jack doesn’t get Howard Payne his money in the next 3 hours, that bus will be rather crispy along with anyone inside.

“I can’t raise that kind of money in time!” he pleads.

“Focus, Jack! Your concern is the bus.” The next two hours follows Jack as he boards the bus, and guides it as it blows through LA streets above 50 m.p.h., a feat most people can’t accomplish on a daily basis commuting there, let alone in a bus. Payne is always one step ahead of the good guys, but even so, just like the protagonists in Unstoppable, Jack’s quick thinking manages to keep the bus from blowing up long enough to deal with the next unforeseen problem.

The third act does get a bit ludicrous, even for a movie of this nature, when Payne takes the attractive driver of the bus, Annie (Sandra Bullock, in her big break) and straps her in a dynamite vest. There are also a couple of instances where Jack’s actions save the lives of himself and Annie, but recklessly endanger the lives of bystanders, i.e. a certain airplane explosion and a subway derailment. Nonetheless, it remains exciting. The final showdown between Jack and Howard is gripping, and even though Hopper is about 30 years older than Reeves and probably six inches shorter, he holds his own against him in a well choreographed fight.

Jan de Bont directed, who previously up until that point had only been a cinematographer, most notably on Die Hard. He must’ve taken notes from the directors he worked with because he constructs a taut film and gets the best performances from his actors (it’s one of the few films I think Keanu Reeves is good in). Hopper gets the best lines, as the villain always does, courtesy of Graham Yost.

Speed. If you haven’t seen it, see it.