By: | Comic News | March 29, 2011
More Limited Editions you say? Well IDW will have an exclusive print of their new Dorothy of Oz at Wondercon this weekend. It sounds like the numbers are very limited so if you want to get a look at it before anyone else and also snag an exlusive cover that only a few people will be able to get, then pick it up when you stop by. I'll slap on the times of when you can get the book and also the details about a Facebook contest where people not attending Wondercon can try to get their own copy.

DOROTHY OF OZ, the first in a series of five limited edition comic books, will be officially unveiled at San Francisco’s WonderCon. The comics will fill in the gap for eager franchise fans from the classic L. Frank Baum “Wonderful Wizard of Oz” tale to the upcoming 2012 release of the animated DOROTHY OF OZ, based on the book by his great-grandson Roger Stanton Baum. The comic is produced by Summertime Entertainment and Publishers IDW. 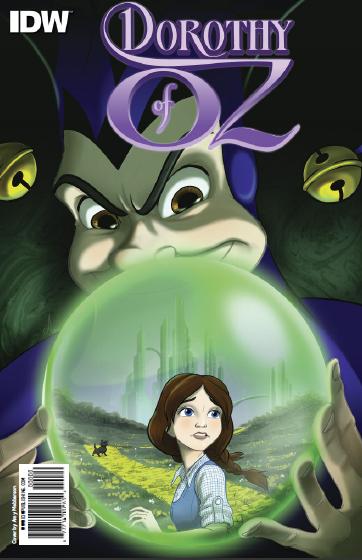 Also, 10 lucky OZ fans who can’t make it all the way to San Francisco will win the comic in an exclusive Facebook Fan contest. Entrants will submit a personal video explaining in 60 seconds or less why they are excited about DOROTHY OF OZ and why they are the biggest Oz-fans on Facebook.  The contest will run worldwide from Wednesday, March 30 through Wednesday, April 6.

Stop by IDW's booth during these times to get your copy.