By: Justin Moody | Xbox 360 Reviews | August 27, 2010
It is a time of the summer when the crack of the bat is replaced by an aluminum ping and the average player goes from being 6' 5" to more like 5' 4". It is a time when Williamsport, Pennsylvania, plays host to kids from all over the world who care more about getting their homework done than a seven-figure salary as they all vie for a shot at the world title.

In honor of the actual Little League World Series tournament going on (I'm actually watching an elimination game as I write this); I felt it would be prudent to review the corresponding video game. For the first time we see the cartoony graphics and kid-friendly gameplay mechanics leap over to the more adult oriented game systems. That's right; LLWS 2010 is now available on all systems, including Xbox 360 and PS3 and that alone makes this game deserve a look.

With the leap to the new systems, there are promises of more surprises and content besides just achievements or trophies. Unfortunately, most of the promises of deeper gameplay and a more enthralling experience are false. The addition of being able to compare your stats online is a nice feature and a new season style mode to settle the tournament is a different take on things for sure if you don't want to go through the traditional tournament. The inclusion of new mini-games such as a Simon-like memory game and a baseball bowling hybrid help flesh out the game, but besides all this it's really the same experience as the 2009 version. 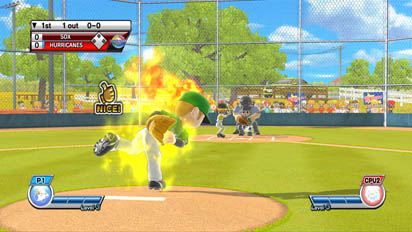 You select where your team originates from various regions and countries all over the world and can customize the look of your team after choosing a mascot from a previously compiled list. You then play through the deepest regional tournament mode to date to see if you can become the team to represent your region or country (being from Jersey, I always try to represent the hometown Toms River powerhouses in the Mid-Atlantic region). If you continue to win, you continue to advance until you hopefully take home the trophy that serves as the ultimate representation of teamwork and selflessness as Little League World Champs.

In order to help you out, just like in the previous games, you can use cards that you earn by doing well (like in Madden from the late 90s-early 2000s) to bolster your stats for an at-bat, an inning, or an entire game. By also doing well in a particular game, you can earn levels that you can use to have you pitcher throw fire, literally, for an at-bat, or to give your superstar player the ability to hit an instant home run if they make contact. 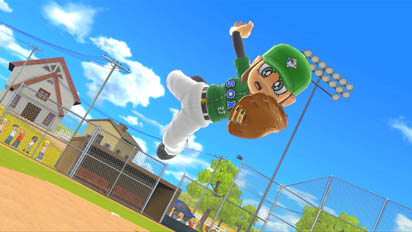 Brent Musberger and Gary Thorne return to the do the limited play-by-play that stresses "sportsmanship and fair play" and the graphics at least are crisper and cleaner than in previous years, even if all the players are still very anime influenced, showing that developer NOW Productions took advantage of the better processing power of the new systems, even though LLWS 2010 still won't push the Xbox 360 or PS3 anywhere near to where they are capable of going.

Clearly, this is a game geared towards kids who are still eligible for the LLWS and taking that into consideration, this is a solid experience overall. The game allows you to use a strong A.I. to help with fielding and base-running if necessary, although it does make the wrong decision sometimes in taking one base too few or having the wrong fielder go for the ball. It can be forgiven though because it always works both ways. The graphics are also the best they've been for the series, even if they are a little too anime influenced for a simulation game. There is no plot to speak of with a simulation because it all revolves around how you do with your particular team and so it is like you write your own storylines. Add in a brand new season mode and deeper tournament mode and you have a very strong rental experience, but I doubt this will hold any up and coming baseball diehards' attention for too long.