Lord of the Rings: War In The North – Hands on preview

Can you believe it’s been ten years since the Lord of the Rings movies first hit theatres?  In that time there have been plenty of LotR games; many of them have been great, but a few clunkers have popped in as well.  Warner Brothers Interactive Entertainment has a new one coming, and I had the chance for a few minutes of hands-on play with “War In The North” at the Penny Arcade Expo East.  Here’s what you need to know about this latest adventure through Middle Earth.

First, it isn’t directly taken from events seen in the movies or books; it’s a new story featuring a new cast of characters.  Warner Brothers does have the rights to use material from both the movies and the books, but they’ve decided to take the project in a different direction. The game is set in the same time period as the Lord of the Rings, and in many of the same places, but you won’t be playing Argorn, Legolas, or Gimli.  Instead, players will be able to choose from three different representatives of these races, each with a dedicated class; the human will be a ranger who is a good balance of melee and ranged combat, the dwarf is a burly hand-to-hand tank, and the mandatory hot female elf is a mage who specializes in ranged combat and control.  They will battle Sauron’s minions in familiar places like Rivendale and Mirkwood, along with other locations in the North-Western areas of Middle Earth, far from the fires of Mount Doom, or the seven tiers of Minas Tirth. 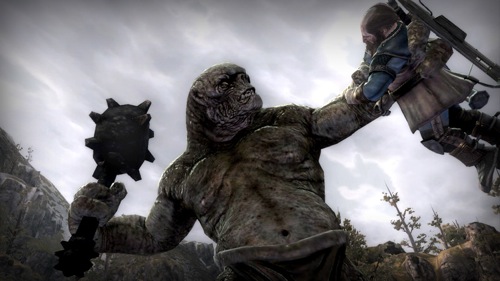 The Developer, Snowblind has a long history of this sort of action RPG, dating back a decade to Baldur’s Gate: Dark Alliance.  These people have a distinct style that has been used for other franchises like Everquest and the Justice League, plus the game engine they devised for Dark Alliance was also used for a few other titles, like the re-boot of The Bard’s Tale, and one of the Fallout games.  Needless to say, this new game is running on vastly superior hardware, and the first thing I noticed was how good the graphics look.  I haven’t had the chance to see Middle Earth this clearly in a video game before. 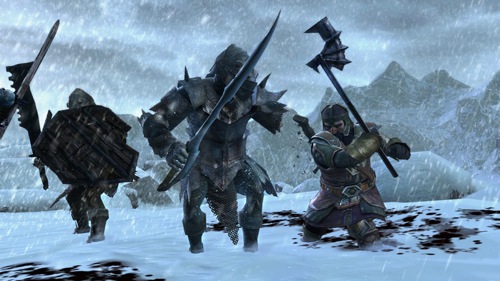 Once the gameplay started, I got down to the business of cleaving some goblins.  The focus of the game is on co-op multiplayer.  Between one and three gamers can join together in their own little fellowship, and I chose to play as the surly dwarf.  At my side were the other two members of this well-balance RPG trinity, the damage-dealer and the controller.  My task was clear, and I charged into the fray, using my axe to make sure that our enemies were focused on me, rather than my two squishy teammates.  Having played many games by Snowblind before, I felt right at home with this new one.  Basic attacks let me hammer out combos, and at times I could hit the “Y” button to perform special maneuvers that would help finish off the tougher opponents.  I had a set of special abilities like buffs, and Area-of-Effect attacks as well.  These could be used an unlimited number of time, but had a cooldown so that I couldn’t spam them, and they recharged quickly enough that I never felt hesitant to use them when in trouble. 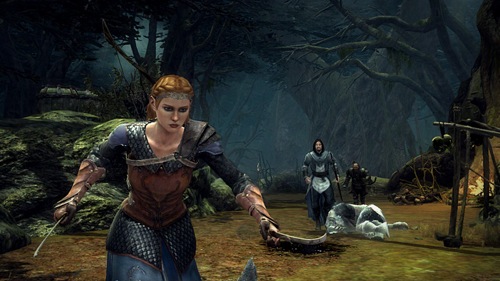 I didn’t get the chance to experiment with leveling up my character, and choosing from the different branches of the skill tree, but the developers say that there will be options for making your character more flexible, rather than sticking to the standard archetype.  The playstyle was different than the movie tie-in games from 2002, made by Electronic Arts.  I quite enjoyed those games, but I also like Snowblind’s take on the franchise as well.  Both provide a heavy dose of action, yet Snowblind’s take on the series is the first LotR game to have an M for “Mature” rating.  Yes, head fly, and blood spurts from truncated limbs as you can see in the video below. 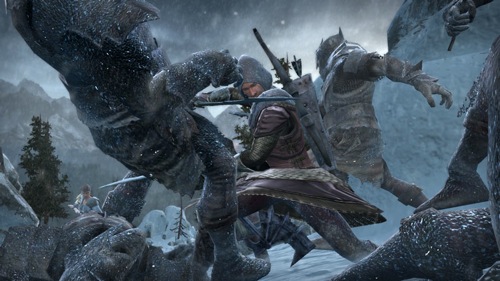 Recent LotR games like Aragon’s Quest, or Conquest have received tepid ratings, and fans have had to turn to the free-to-play LotR online game for their fix.  However, based on what I’ve seen with my own fiery glowing red eye, Lord of the Rings: War In The North is going to be a big step up for the series.