By: Justin Moody | TV Reviews | January 1, 1970
Some television shows suffer from “Epic Episode Syndrome.”  It’s fairly common on the silver screen right now, but there are certainly shows that suffer from it more than others.  “Epic Episode Syndrome” is when a TV show follows up an incredible episode that contains all the hallmarks of an instant classic, or “epic” episode if you will, with a rather weak episode, one that seems to be suffering from too many comparisons to the aforementioned “epic” episode.  I only bring this up because Lost has suffered from this problem since the day it aired.  Last week, people began complaining once again that Lost had relapsed and was suffering from “Epic Episode Syndrome.”  They claimed that “The Package” was a pointless episode, a meaningless foray into two characters who are not nearly as important as others in the big picture of things.  They claimed it was boring, contained no forward momentum and had a cheap ending.

Personally, I find no symptoms of “Epic Episode Syndrome” with last week’s Lost episode.  We were given, for the first time in a while, a straightforward episode that was filled with set-up and preparation for the final group of episodes.  And while it’s true that this episode probably didn’t provide a great number of answers, it didn’t linger around the questions for an hour before letting us know it wouldn’t answer them.  Instead, we were given some great scenes between characters, a good focus on Widmore and his intentions on the island, and the return of a character that will perhaps be a game changer.  It wasn’t the greatest episode Lost has produced to date, but it wasn’t nearly as bad as some have made it sound.

“The Package” focused on Jin and Sun, showing how each of them are dealing with their respective situations on opposite sides of the island.  Both of them long for each other, but they’re also both caught in situations that are much larger than their relationships.  Sun and the rest of the survivors on her side of the island are attempting to figure out what to do now that Richard and Hurley have left, while Widmore’s people capture Jin from Locke’s camp in order to be interrogated.  Despite their attempts to find each other, it seems fate has more important things in store for them.

The alternate universe was somewhat interesting, albeit a little predictable.  The problem this week was that besides the events leading up to it, we already knew how their story-line would end: with Jin locked in a freezer at Martin Keamy’s restaurant.  There is some additional information to this particular plot, but it’s not enough to save Jin and Sun’s story from being a little lackluster compared to some other ones.  One interesting piece of information to notice: Jin and Sun are not married in this universe and appear to actually get along.  It’s common knowledge that Jin and Sun had marital issues in the first season.  They argued all the time and Jin appeared to have dominance issues over Sun.  However, times have changed, characters have died and come back to life and years have come and gone and returned again; Jin and Sun are as in love as ever, and in the sideways universe, it appears that none of these marital issues have ever existed. 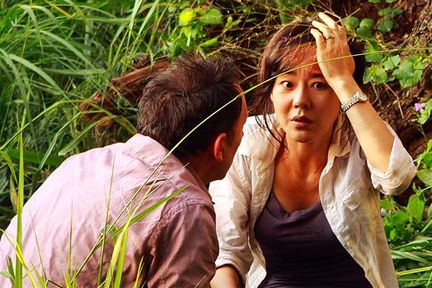 On the island, there was plenty going on to keep even the most skeptical Lost fan interested.  There may have even been too much going on.  One moment, we were watching Locke chase Sun through the woods, then we'd jump all the way across the Island to Jin and Widmore before being taken to the alternate timeline to watch Jin and Sun deal with Keamy and his minions.  It was a fast-paced episode (at least for Lost it was) and at times, it felt as if they were trying to cram too much into one episode.  After all, there's only a few episodes left until Lost leaves the airwaves for good and we're left with a giant gaping hole where a television masterpiece once was.  It's understandable for a show to have to cram a little bit of plot development, but hopefully we have a chance to flesh out some of the stories, especially with next week's episode focusing around a character we've barely seen since Season 4.  This isn't a complaint so much as a wish.  However, that doesn't mean the stories told throughout "The Package" weren't good.  In fact, there was some incredible moments, including Jin seeing his daughter for the first time (I've been missing Jin a lot lately, especially since he's been around since the beginning; I was very glad to see him given some substantial scenes), Sun talking with Jack, even though they couldn't communicate with one another and any scene with Locke, because he's just a creepy guy who still has a lot of mystery surrounding him and captivates every scene he's in.

Having said all of that, there's still quite a lot of questions I have, and some new ones now that we've seen what happens between Jin and Sun: what in the world does Widmore need Desmond for?  Long-time Lost fans can speculate and spout theories that make little sense, but it's difficult to pin-point exactly what he's needed for.  Does Widmore want him for his ability to seemingly transcend the properties of the space-time continuum (for anybody who's not entirely sure what I'm talking about, watch the episodes Flashes Before Your Eyes and The Constant; both are excellent examples of how unique Desmond is)?  Does Widmore want Desmond away from Penny once and for all?  Or is it just fate bringing them all together?  I'm sure it will all (well, not all, but a little bit of it) be answered tomorrow night, but it's still giving me something to think about until then.  Also, we haven't seen too many of the Losties making a connection between the real universe and the fake one; in fact, up until now, only Jack has seemed to have some sort of deja vu about everything.  He found wounds on him that he didn't remember and remembered Desmond from somewhere, though he can't quite recall.  However, tonight, we saw Sun look into a mirror and almost focus on something, as if she saw an image appear or was trying to focus on something.  I was intrigued and very let-down when we didn't get anything more than those few seconds.  However, it does seem to be hinting at an important "collision" of sorts between these two universes.  The effects of what happens in one universe may start effecting the other (does anybody really think that Sun just lost her ability to speak English randomly?).  It seems more likely that by hitting her head, some of the details from the alternate universe leaked into the real one.  It's all speculation for now, but it's fun to ponder.

"The Package" certainly wasn't a game changer liked "Ab Aeterno" last week, but it began setting up all of the pieces for the final set of episodes.  Lost will end on a superb note; it's just a matter of getting there that's going to be keeping people on pins and needles.  If the storytelling can stay consistant like it was tonight, and if we can get some great emotionally heavy scenes as well, this season will continue to stand out.  Lost has always been known for being a game-changer, but this season has seemed to put a lot of people on the fence.  Let's hope that this story can be told without growing more complex and convoluted.