I think Mad Max (the game) made me do the most disgusting thing I’ve ever done in video game before. At one point I was low on health and the only means to heal myself was a dead body filled with wriggling maggots. I grab a handful from inside the corpse and ate ‘em up.
This is the world of Mad Max. Harsh, disgusting and filled with death. It’s our world, but years after it has died. The oceans are gone, most animals are gone and the people who remain wish they were gone too. And this is where Mad Max (the game) takes place. Surprisingly, a lot of fun can be had in the death filled desert wasteland of Mad Max. But you’ll also find some monotony.
Developed by Avalanche Studios, the Just Cause people not the Disney Infinity people, Mad Max is an open world action game set in the..wait for it… Mad Max universe. And while the game has some connections and references to the recent film (Fury Road) this is a separate universe with its own Max and its own characters. 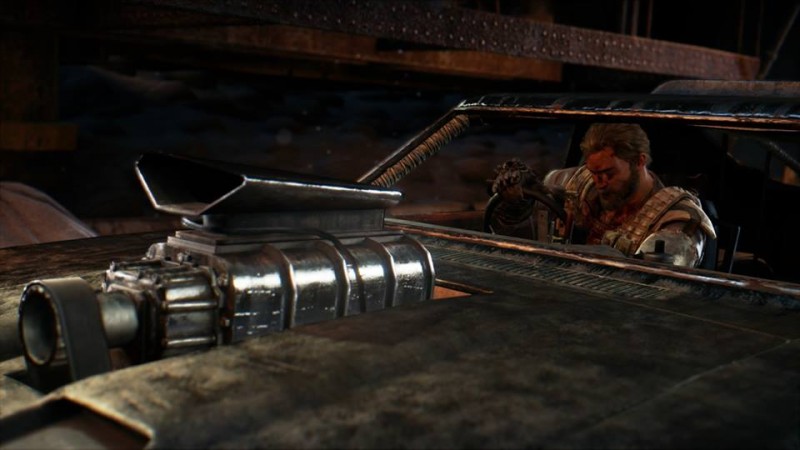 I would like to say more about the story, but I can’t. Not because I don’t want to spoil it for you, but because there really isn’t much story to speak of. You get attacked at the beginning, in a cutscene, by Scabrous Scrotus. This is one of the sons of Fury Road villain Immortan Joe. He runs Gastown, a large facility that drills for oil and refines it. One of the few places in the wasteland where gas is in abundance. The first thing you do when you come face to face with old Scrotus is grab his chainsaw staff and drive it into his forehead. This does not kill him and instead you escape, with nothing but a shotgun and your shirt, while he now is even more crazy and angry.
From there the story slowly follows a standard video game path. Max wants a few things, many of which take other things to get. So you talk to people, get missions and do stuff for them. Max isn’t really interested in Scrotus until the very end when some stuff goes down and Max wants revenge. Trouble is that the stuff that “goes down” is based upon two characters who have maybe 20 minutes of screen time in this entire game. Yet I’m supposed to care about them. I didn’t and the last 30 mins felt like the most video game ass video game. Fight big boss in different forms. Roll credits.
Yeah, story and narrative are not the reasons you should play Mad Max. 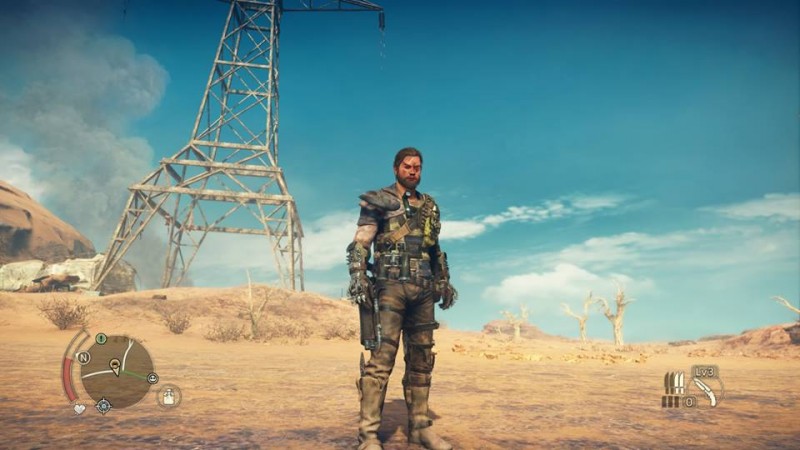 But here is a good, if not a bit superficial, reason to play Mad Max: the visuals. This is a gorgeous game. I mean ridiculously beautiful. Fantastic draw distance and superb lighting combine to create one of hell of good looking game.
When the sun is up the desert is bright and hard to look at. When the sun is down the wasteland is covered in a cool blue dotted with dark shadows. I took a lot of screenshots while playing Mad Max because I constantly found myself in awe of some of the visuals. Huge rocky cliff faces, long winding canyons and more. All of it looks great. And the large, empty and open areas may sound boring, but they are perfect to drive around in. 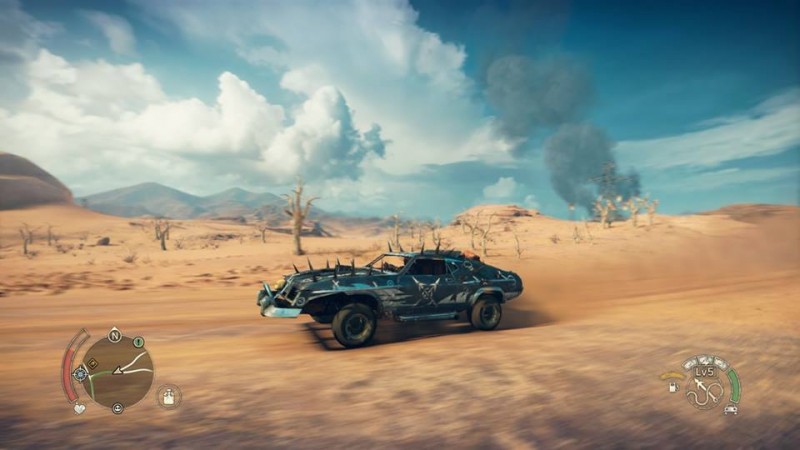 Which is another great reason to play Mad Max, the driving and car customization. Driving in Mad Max is fun. It feels good to take fly over dunes or slide around dirt roads. What is really nice is that every vehicle feels different. Big trucks can be hard to steer, while small dune buggies feel light and nimble. Muscle cars are loud and heavy and smaller cars are more agile and weak.
All of this variety in car physics and damage makes the car combat more enjoyable. Early on you get a harpoon and using this harpoon is a lot of fun. You can rip off tires of smaller less armored cars or rip dudes who are riding on the outside of the car clean off their vehicle. A nice thing that Mad Max does during combat is slow down time a bit when you aim. Driving and aiming can be a hassle. Slowing down time is a smart way to make it less annoying. And let me tell you, it feels immensely satisfying and cool to stick a shotgun out your car window and blow some car’s gas tank up. I should mention that explosions look fantastic in this game. Driving around the wasteland with a sawed off shotgun and harpoon is pretty damn fun.

But you will spend most of your driving time in one vehicle. She is called the Magnum Opus and you get to decide what kind of vehicle she is. Do you want her to have big tires and a muscle car body, you can. Want her to have  pink paint and spikes, you can. Gold with a large V8 and wheel spikes? You can do that too. You have to unlock most of these. But I really enjoyed personally building my Magnum Opus to exactly how I wanted it.
In fact, by the end of the game I had developed a really powerful connection to MY car. I certainly cared more about the Magnum Opus than any of the characters in Mad Max.
You can also customize Max himself. You can unlock new jackets, gloves, shotgun upgrades and even hairstyles. You will also earn “Griffa Tokens” as you level up. Leveling up is done by completing challenges, like blow up 25 enemy cars. These tokens are used to up Max’s skills. And don’t worry about choosing which skills to upgrade. By the end of the game I had maxed out all my skills. As you play Mad Max you will also unlock new combat moves for him. Which is nice because the combat can feel a bit too simple and underdeveloped. 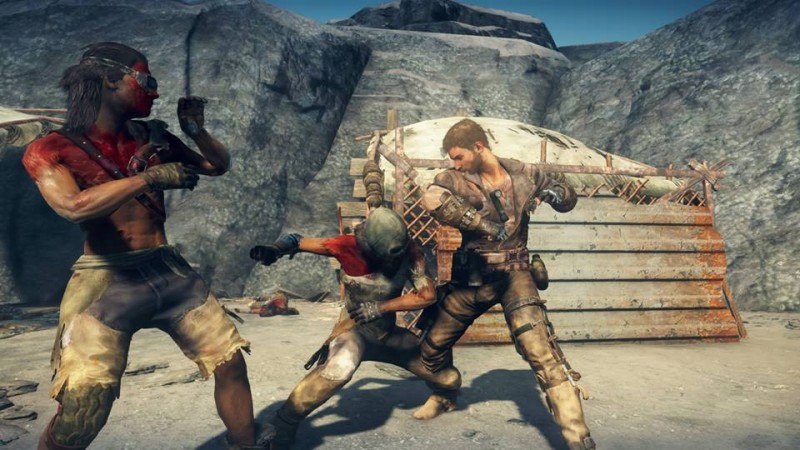 The hand to hand combat in Mad Max can look and even sometimes feel brutal, but it just doesn’t flow as well as the recent Batman games. And this combat is basically just the Batman combat, but without the same flow. What I mean is that you will be in the middle of a combat animation and someone will attack you and you can't really do much sometimes.
The combat is heavier and more brutal, which fits the universe and I didn’t hate the hand to hand combat. I just felt like it got repetitive and dull after a while. And as you get more upgrades it becomes super easy to just take out nine-ten guys at a time.
And that is Mad Max’s biggest problem: monotony. The story missions and sidequests are usually different and exciting. But the side activities that litter the map are not as diverse and quickly I found myself bored of doing them. Yes, there are hundreds of things to do and collect, but most of them fall into a few different types. And you do them over and over. Like the Top Dogs. These are the big bosses in each area of the map. But each fight is the same. They look the same and share the same moves. It just feels lazy to copy paste so much of the game.

But while most of the side activities are dull and easily forgettable, there is one side activity I really enjoyed. In fact it was one of my favorite things in Mad Max.
Taking out enemy bases. And yes, it is very similar to outposts in the Far Cry series. But it doesn’t change the fact that it is a lot of fun to do. You can’t really sneak into any of these bases, even if the game sort of has some stealth mechanics in it. These are barely developed and feel inconsistent. At one point I snuck up behind a guy while my flashlight was brightly lighting the dark tunnel we were in. So, not the most advanced stealth. Still, taking over bases by systematically killing every enemy and taking out all of their security is fun. And some of these bases can get challenging. 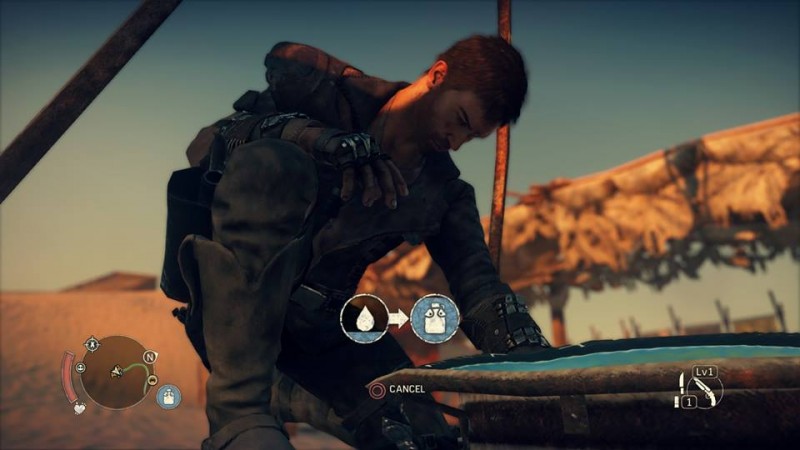 What makes this even more difficult is the fact that health doesn’t regenerate. To heal you need to scrounge around for maggots or a rat you can kill and eat. You can also store water in a canteen and drink some to get back some health. During combat you can roll away and drink a bit, which reminded me of Dark Souls. Which was a strange. There seems to be a focus on survival...early on. Which I liked.  At first you are worried about running out of gas. Or using up all your water. Or running out of ammo.
But fairly quickly I stopped worrying about the survival elements. You level up pretty fast and if you spend a little time helping some of the locals you will be set. Whenever I quick travel or visit one of the friendly strongholds in the wasteland all my ammo, health, gas and more are refilled. And I was able to level-up my health and gas usage along with upgrading my clothes so I can hold more ammo.
By the end of Mad Max I was a one man army able to take on dozens of men without breaking a sweat. Which sucks. I liked the early hours of the game when I felt like I was desperate and constantly looking for scraps of food or ammo. By the end I was a god and felt bored with most of the car and on foot combat. 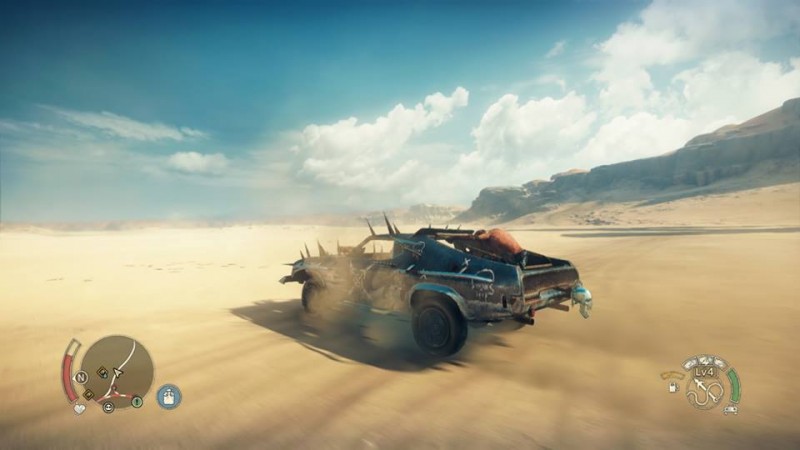 And that’s how I felt about most of Mad Max towards the end. There are some great ideas and some fun stuff in Mad Max. But as the hours tick by the game became easier and even though it has a big map, that map is filled with the same four or five activities which you do over and over and over. The story isn’t great and the open world can grow boring as you become more powerful. Visually it is impressive and I had a lot of fun in the first 10 hours or so. But the problem is I played Mad Max for 20+ hours. And by the end I felt bored.
But it is still fun to shoot people with a harpoon and fling them over your car. Even 20 hours later.
Rating
7.2
Pros