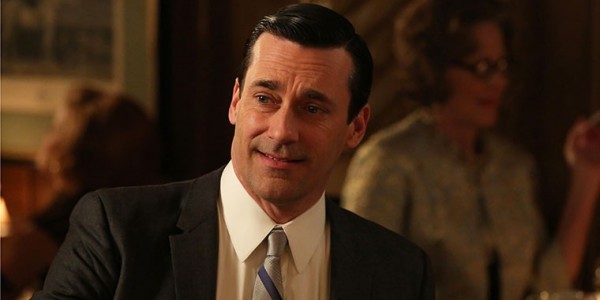 The latest episode of Mad Men explores the characters' impulses in both business and personal affairs, and the acting and writing are top-notch. "For Immediate Release" is clearly the best episode of the season to date. So much happens in this episode, it is amazing that Matthew Weiner squeezed it all into a 46-minute installment. The characters' actions (some questionable, some brilliant) drive the narrative to a satisfying and anticipatory conclusion. The potential merger between SCDP and CGC is something that has been hinted at and foreshadowed quite prominently in the season; ever since Ted Chaough complained about their situation after the Heinz pitch, there have been numerous instances of similar bouts of frustration from other characters, which (as I stated in my previous review) made the possibility of a merger seem inevitable. So when it came down to Ted and Don making the very impulsive but momentous decision to join forces, it didn't come as a huge surprise or revelation; instead it was a development that had been taking form for some time. Still, while it wasn't a huge shock to many that the companies ended up merging and victorious in the Chevy competition, it was an entertaining story to see unfold. Yes, we see the wheels turning as the story progresses, but because it was so well written and executed, it wasn't a chore to sit through. "For Immediate Release" is a game changer; much like the season 3 finale "Shut the Door, Have a Seat," it presents the business in a crucial point of transition/transformation and opens up a realm of possibilities for the future, which is the most compelling and exciting aspect of the story arc. The sense of anticipation is absolutely palpable and leaves a lot to look forward to in the second half of the season. 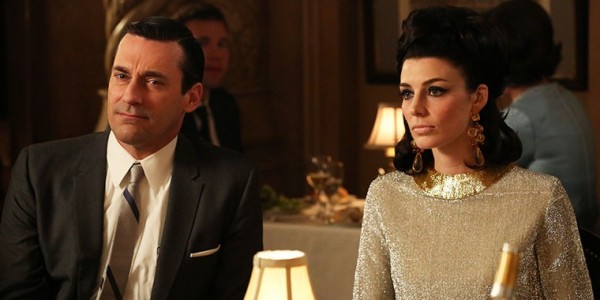 The least successful part of the episode is certainly the Megan storyline. Is she becoming the new Betty? Megan is an interesting character, and Jessica Pare an able actor, but the whole "neglected wife" scenario is just boring. In an episode that is so fast-paced and focused on the office, it is a noticeable slow down to hear Megan complain about her marriage, and this story arc is just not captivating. It is a straight-up Betty Draper flashback. A significant difference from what we have seen in earlier seasons is that Megan can actually communicate what her feelings are to someone she trusts. Betty never seemed able to express her experience, and she certainly didn't have a confidant to whom she felt comfortable talking. There is one plus out of this storyline: the return of Marie. Megan's mother visits for the weekend and provides some great comic material. Weiner kind of reduces the character to a drunken caricature, but it is awesome and it works for the purposes of the episode. Her phone conversation with Roger and her behavior at the dinner with Herb are both just fantastic and a wonderful use of Julia Ormond. Despite the Marie awesomeness, the Megan storyline feels underwhelming in an episode with so much strong material. If Weiner had decided to completely omit Megan from the entire hour, she would not have been missed, and we would have been given more time to explore more intriguing storylines of the show. 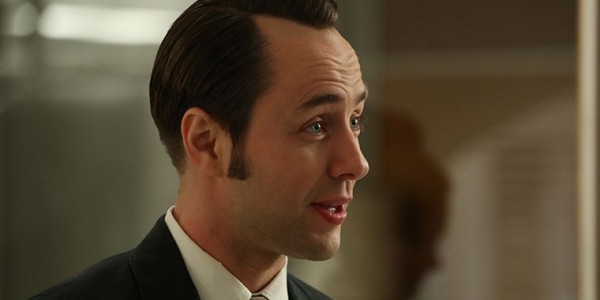 Pete's home life proved to be more interesting than Don's, since it is not only genuinely compelling (a different take on marriage discord and also a first for Pete) but also ties in to the business aspect of the show. Poor Pete, he was maybe making the smallest of baby steps with Trudy when it all went horribly, hilariously wrong. Pete Campbell may not be likable, but there is no denying he is a compelling character, and Vincent Kartheiser never disappoints. From his supremely prodigious acts of physical comedy (that fall down the stairs is still replaying in my head) to his spot-on line delivery, "...the biggest, blackest prostitute you've ever seen," he has once again proven to be a very, very talented performer. Can someone give him an Emmy, already? Allison Brie is always a treat as Trudy and the two work off each other splendidly. I wonder about Brie's involvement in the show as it progresses; Pete and Trudy seem to be headed to divorce-ville and the show certainly cannot handle another divorcee lurking in the narrative shadows, but it would be a shame to see her go.

While his personal life disintegrates into pure sadness, Pete has grown significantly as a businessman, gaining the respect and trust of Bert Cooper, and while he has to battle with Don most of the time, he does put up a strong fight. He is totally in the right when accusing Don of being "Tarzan" and handling Jaguar poorly. Look, we all wanted to see Herb shut down; he was an absolutely despicable character. But however satisfying it was for us to see Don give him a verbal smack down, it was an immature act on his part. "As usual you have acted impulsively and harmed the company irreparably," Pete screams at Don, summarizing Don's repeated behavior. Just because Roger got his shit together ("I have the check for $10,000 because I close, Pete. I close things.") and managed to get in on the Chevy deal doesn't mean Don is justified; he just got incredibly lucky.  More impactful is Joan's brief outburst (perfectly delivered by Christina Hendricks) at Don "Just once, I would like to hear you use the word 'we,'" she says, again pointing out his disregard for the people that depend on him or are affected by his actions. This is Don's M.O.; we have seen him act this way since the first season in both business ventures and his personal life. He acts on impulse and doesn't stop to think about the consequences. Though he seems surprised and maybe even touched by Joan's words, he completely dismisses what was said and once again impulsively makes a major decision (merging with CGC) that will have significant impact on the company. 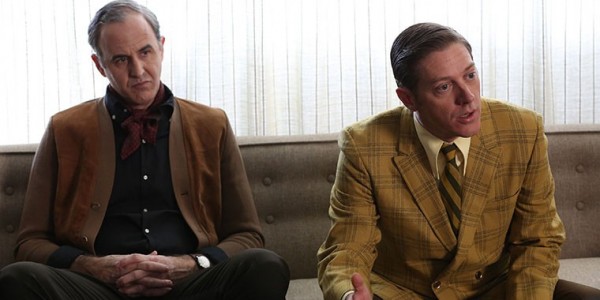 The merger is a great plot device because so much narrative material could emerge from it, from tension between the SCDP and CGC partners, clashing working methods/styles, and/or (most intriguing) how specific characters will deal with the change, like Peggy. A major concern to many fans of the show was Elisabeth Moss' involvement in the show after leaving SCDP; obviously that's no longer a concern. Letting Peggy have a semi-separate storyline didn't hinder the show's overall narrative or quality. Some might think that the merger is a hasty way to "bring her back" in a way. I do think that it would have been nice to see more of her independence before going right back into working with Don. It's important to note that Peggy doesn't really appear all that enthused by the news of the merger. Certainly she has mixed feelings about the whole thing; it would be only natural to enter the situation with some trepidation.  Peggy's resignation from SCDP came out of frustration and being unhappy with the way she was treated by Don, since he isn't necessarily the best boss and seemed to be particularly harsh with her. Since her situation over at CGC seems to be much more amiable and pleasant, going back to an environment she wasn't content with might not be so desirable. We still don't know the details of the merge, so the potential hierarchy is unclear, and I imagine that the show will explore the tensions that will most likely arise out of that dilemma. Who answers to whom? How is the work going to be divided, etc.? 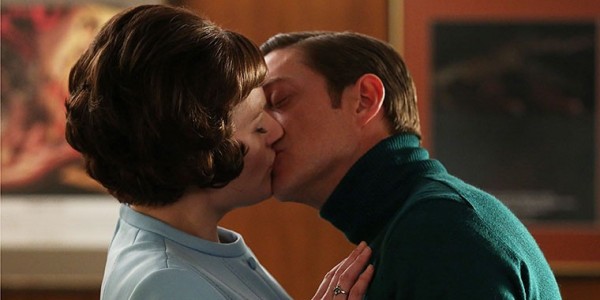 Of course, the ambivalence evident in Peggy's demeanor could just be because she was feeling disappointed that Ted was not alone in his office. She might have been looking forward to spending some one-on-one time with Ted, and out comes Don Draper cock-blocking all over the place. She did care enough to go through a quick powder touch-up before going in, self-conscious and giddy. Peggy and Ted's relationship has already been complicated by the not-so-innocent kiss they shared, and the strain that situation produces will be interesting to explore. Though I wouldn't put it past the program to show them having a full-blown affair by the next episode, things with Abe are taking a slightly sour turn. Whatever course the show takes in the upcoming episodes it is no doubt going to be interesting and new. The writers have created a whole new situation for our characters to navigate, and there is an air of excitement to the series that hasn't been felt in some time. 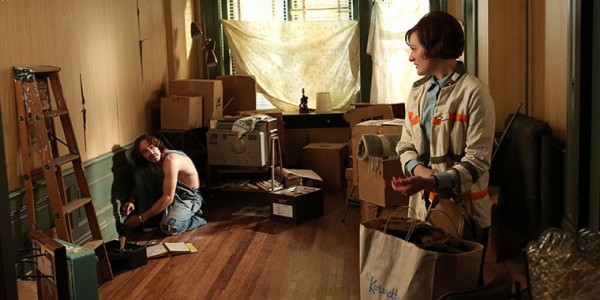 -- Remember everyone speculated that Sterling would become a washed out drug addict this season because of his experimentation with LSD? He hasn't given up trippin', but he is much more on top of the game now. His strategy with Daisy is quite clever and clearly fruitful.

-- Ted quickly mentions the possibility of opening an office in Detroit, to better service Chevy. This could be a way in which the new firm handles redundancy in staff.

-- Lesson of the day: Do not linger in brothel hallways. You never know who you'll meet in an awkwardly cringe-tastic encounter.

-- Now Peggy has a crush on Ted. The potential dynamic between Peggy, Ted and Don will be so interesting to explore. Will Ted be jealous of the familiar rapport Peggy and Don share? Will Don and Peggy's relationship be strained by what they have gone through? How will Peggy handle working for a man to whom she is currently attracted, and the man with whom she shared a very special, particular relationship?

-- Peggy's fantasy was hilarious, from the slightly cheesy music to Ted reading "Something" by Ralph Waldo Emerson. Ha!