“I know everything about you, and I still love you.”

And with that, Anna Draper, widowed wife of Don Draper, who died in the Korean War when a young solider peed himself and dropped a cigarette, said everything that Dick Whitman wished his wife Betty had said when he finally revealed himself to her.  But she couldn’t.  Years of lies and betrayal, and a steadfast belief in the image of how her life “should” be, made it impossible.  But here, with the woman who’s husband he inadvertently killed, Dick Whitman finds a bit of peace.

Until he learns that she’s dying, that is.

Anna has always been a compass, of sorts, for our Don;  a place where he goes when he needs to find his bearings.  The one spot where he can put his guard down and be who he really is, not who he’s tried so hard to become.  Here he stops by whilst on his New Year’s vacation, only to find that she, like his family, like his old company, is being taken away from him.  Don is being left with very few things in his life to hang on to.

Up until he finds out the news about her cancer, news that Anna doesn’t even know, this episode marked the happiest we’ve seen Don all season.  He’s always seemed more relaxed around Anna, but here he appears positively overjoyed.   And although we knew that Anna was aware of the truth about him, and it certainly makes sense that she wouldn’t call him by her dead husband’s name, it was still surprising to hear Don referred to as “Dick” for most of the episode.  And it was shocking to see him accept this without the slightest hesitation. You know things must be going pretty badly for Don Draper when he prefers being Dick Whitman, the identity that he ran away from and never looked back.

But as Don loses Anna, he’s going to lose his last remaining tie to Dick.  His parents are dead.  His brother killed himself.  And now Anna will die.  There are still people, such as Betty, Pete, and Burt Cooper, who know that Don used to go by another name.  But these people never knew Dick Whitman, just Don Draper.  So despite what they know, that’s who Don will go on being. 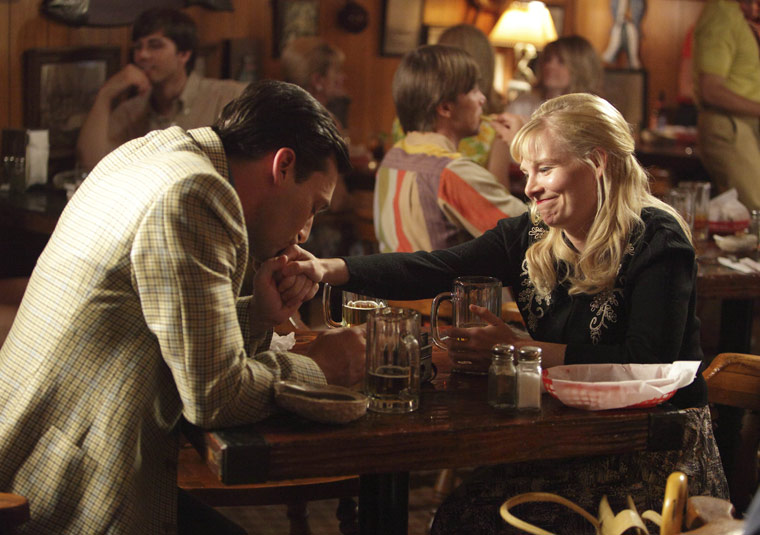 Upon leaving Anna, possibly for the last time, and despite his assurances that he’ll bring the kids to visit her for Easter, Don returns to his old ways, this time bringing Lane along with him.  Lane is another character who is making choices between parts of his life.  In his case, he’s losing his wife because of his desire to work in New York and not London.  While Don Draper might not be the best role model in these situations, Lane certainly seems to enjoy his night of eating, drinking, and screwing prostitutes.  Possibly my favorite moment of the episode came when Lane, ever the polite Brit, insisted on reimbursing Don for his night with the girl.  It seemed a little strange when Lane joined the rest of the main characters at then end of last season to start up Sterling Cooper Draper Pryce, but here he seems to be finally integrating into the cast, although it remains to be seen if this is just with Don or if it’s with everyone else as well.

Everyone else, however, is almost entirely absent from the episode.  Peggy and Harry have maybe two lines each, Roger and Pete are seen but not heard, and Don’s former family isn’t there at all.  The only other character we’re left with is Joan.  Wonderful, wonderful Joan. 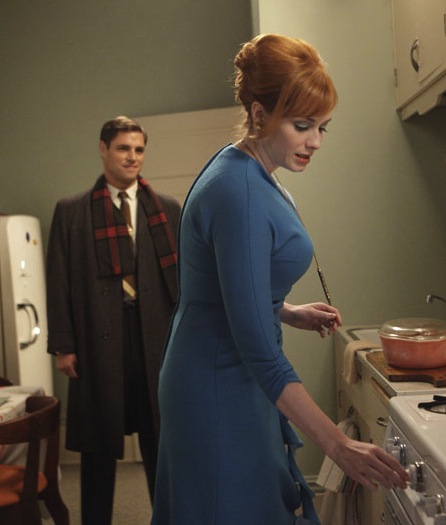 While Joan doesn’t count as a character from the past returning, like Anna, since she never technically left.  However, her role was so toned down during season 3 that it almost feels like she is.  Granted, her absence last season made it all the more thrilling when she made her triumphant return in the finale, but I don’t think that fully made up for a season in which we were mostly without one of the show’s strongest characters.

This season we have no such issue, as here we get a more behind the scenes look and Joan’s marriage.  Joan’s life, like everyone else’s on the show, hasn’t turned out like she planned, mainly thanks to the failings of her surgeon-turned-army doctor husband.  Here we see they’re trying to conceive a child before he’s sent of to Vietnam (from which I, and many other viewers, I believe, hope that he never returns).  While we do get to see a rare moment of sweetness from him, when he fixes Joan’s hand after she accidentally cuts it, it doesn’t begin to make up for the things he’s done to her in the past.  And even this nice moment comes with obnoxious condescension, as he refuses to take her to the hospital when she asks and treats her like one of his child patients.

People on Mad Men, as always, are hanging on to the images of what they want their lives to look like and not what they actually encompass.  It remains to be seen if they’ll finally face the reality of their situations.  Don has lost his wife and will soon lose his last link to his former life.  Joan will soon lose her husband, at least for a little while (and hopefully longer) to the war.  Perhaps these events will make them wake up as to who they truly are and want to be.  As someone who’s watched these characters cling to these facades for years, I’m not too optimistic.