With 'The Rejected', the Mad Men world finally enters the 60s.  True, it’s now 1965, and the entire run of the show has taken place after 1960, but up until this point the counter-culture movement that the decade is remembered for, has been in the background.  They’ve been hinting at it, such as last week when Don teased Anna’s niece about the Berkley College sit-ins.  But now it’s here, in an episode that is both the strongest and the funniest of the season. The characters are going to need to decide whether to go along with it or hang on to their old ways.

On opposite sides of that divide we’ve got Peggy and Pete, two former lovers who continue grow further and further away from each other.  Peggy has expressed her desire before, to live a more adventurous life outside the office.  But in the past, that has pretty much ended with her smoking pot with Paul Kinsey (who I miss dearly) and letting a gay man cut her hair.  But this week she makes a new friend in Joyce, who works in her building as a photo editor for Time magazine.  Through her, Peggy attends an art opening, gets hit on by a girl (when Peggy is told that it’s okay, because her boyfriend doesn’t own her vagina, she hilariously responds “no, but he rents it.”), smokes pot in public, and has to hide from a police raid that ends with people being beaten.  She also discovers who Malcolm X is a week after he’s murdered, showing just how unaware she’s been in the past of the events taking place outside the walls of Sterling Cooper Draper Pryce. 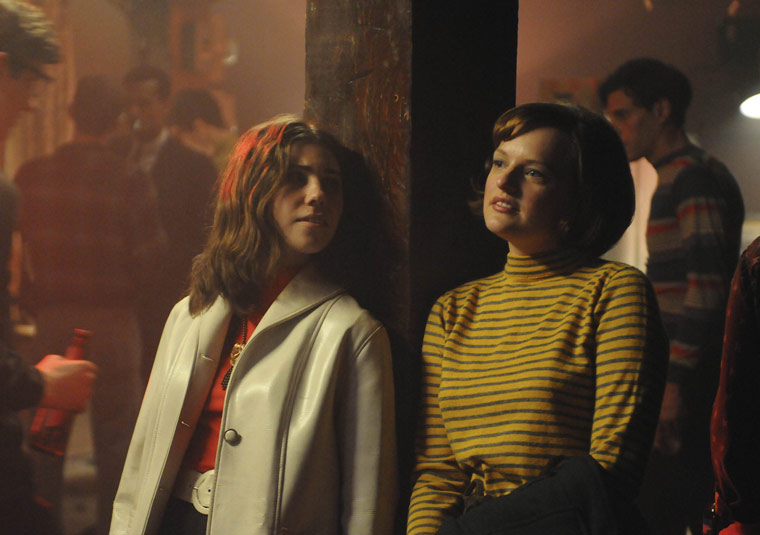 Pete, on the other hand, pushes himself ever higher up the ladder towards becoming a wealthy, old fashioned “good ol’ boy.”  Not that he doesn’t have his reasons for wanting that life.  He finds out (through his father-in-law’s slip of the tongue) that his wife Trudy is pregnant, which they believed to be impossible.  Pete’s face lighting up as a realization of what this means, is one of the sweetest moments the character has ever been given on the show.  However, his joy at being a father-to-be doesn’t stop him from using this news to leverage his father-in-law to give SCDP all of his Vicks business, not simply Clearisil.  It’s a move that would be more shocking if his father-in-law hadn’t used the Clearisil business initially to leverage Pete into giving him a grandchild.  Pete is simply returning the favor.

Though they’re going their separate ways, it is clear that both Peggy and Pete have some longing for the life the other one leads.  Peggy could be living Trudy’s life with Pete, if she had decided to keep the baby that was hisand she does take a timeout to bang her head against her desk when she hears the news that he’s going to be a father.  She also takes time to try on an engagement ring she’s given to hold,  but as she said to Pete in the season 2 finale, she “wanted different things”; I don’t think she is going to regret her decision.  One of the episode’s final shots is of Pete and Peggy looking at each other while she goes off with her new young friends and he goes to a business lunch with his new clients. This might be a little on-the-nose, but it is nonetheless an effective showing of two people, despite their reservations, choosing different paths. 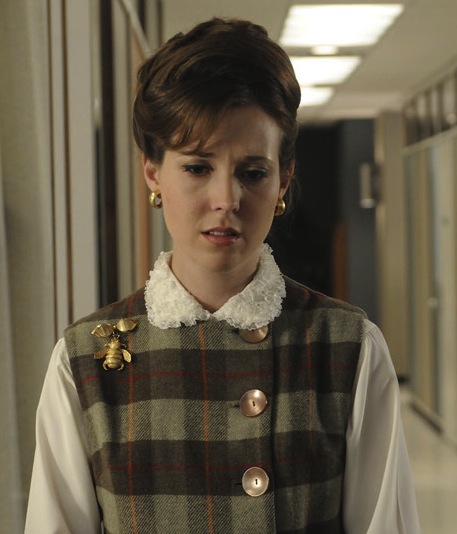 Don, who played a much less active role this week than normal, remains too drunk to notice much of what is happening in the world around him.  The walls he has carefully built around himself, continue to crumble down.  He puts in his office a photo of him and Anna, evidence of his other life, that he would never have allowed anyone to see before.  His personal life floods into the office when Allison finally snaps, after months of Don pretending their new year’s tryst never happened.  She offers her resignation and asks for a letter of recommendation, but when Don suggests that she write it and he simply sign it, it’s too much.  On top of the unfeeling way he gave her a Christmas bonus after they slept together, this is just too uncaring and she smashes many of the objects in his office on her way out the door.  Old Don Draper never would have made the mistake of mixing his personal and professional lives in the first place, but if he had, he certainly would have made sure that it stayed quiet; now he can’t even do that.  The rest of the office might not know for sure what happened between him and Allison, but it’s clear by the way Joan assigns him the elderly Miss Blankenship as his new secretary (who’s played by none other than Randee Heller, Daniel Larusso’s mom in The Karate Kid), they have a pretty good idea.

While those around him continue to grow into the lives they want for themselves, Don Draper is seeing his slip further and further away.  It remains to be seen this season, just how much further he can fall and whether his work is suffering as a result of his personal struggles.  But we know that the world around these characters is going to continue to change and if Don can’t decide who he wants to be in it, it will completely pass him by.